Short Bio about me 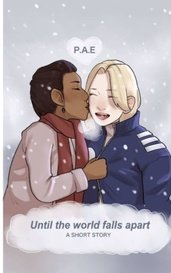 Til the world falls apart

A short romance story that tells the tale of a troubled couple who find their love at Christmas.

I did not like this book. I'm putting it bluntly but it was to say the least 'shit'
I'll start with the positives. There were some element where the description was on point, like when you introduced a new character, however, when compared to the rest of the events, seemed lengthy. The overall plot of the story was good and that's about it.
What we didn't need, was the out of context smut scene on chapter 2. It seemed clumsy and childish, as well as irrelevant. Tom and Alexis' relationship was also forced, and cringey. There are a lot of bad aspects of this story, including grammar and punctuation, and these outweighs the good prospects. Maybe you could update this story or scrap it and try a new one? Thanks

If you love a good novel then this is the one. It has a great plot and effectively describes important events as well as the background information. It does jump between past and present however, and I think this could be clearer (or maybe I just missed it) Grammar and punctuation is a little off, just a few minor issues, can be easily fixed. Thank you!
edit: I wrote this review when I first joined Inkitt and I think I was a little naïve in the way I dished out my reviews, I'm not sure if this description is accurate, because as I skimmed through this story again I realised it is not as great as I first thought it was.

Oh boy,
Well, I feel like this story has a lot of potential, and could be really interesting, however I don't like it. This is mainly because of the technical mistakes such as grammar, punctuation and spelling errors. For example in the summary it says "A biography on how being a Norse Pagan and living in today's society." The word 'how' doesn't need to be there. There are lot's of mistakes such as this in the story and for me takes away from it. As well as this, the speed of this story is way too fast. The plot goes from one extreme to the next and it makes stories such as speaking with Odin sound even more fake than many would originally take it to be. You need to build up the plot, and give people a bit more detail on the how and the why otherwise it's just a badly written fairy tale.
I am serious though when I say it has potential.
Thanks, P.A.E

The introduction captured my attention and made me think that I was going to thoroughly enjoy it. However, one problem I have found it how the sentences are structured. The way the story is written seems like the author is just telling us what happened instead of describing the story and letting it unfold in a natural way.

The story also keeps on switching between tenses and is quite fast paced, which makes it hard to read, The story would be an easier read if it was in one tense, and would flow better if you slowed it down.

Aside from this, I like the story and the characters, and can't wait to see how it develops. Sort those SPaG errors and you should be good to go.

Needs a bit of work..

I haven't finished the story but here's what I think of it so far; It's good. But it needs a lot of improvements. By this I mean checking the grammar. The things are described and the words themselves are great, there's just a few poor grammar and punctuation choices that can be easily solved with a proof-read. I would also suggest using a larger range of sentence types would make it more interesting and flow better. You use the word emaciated a few too many times, which to me gets quite aggravating and doesn't give me, the reader, an accurate picture of her. Also the little blurb-style introduction at the top is a bit confusing, because the words are all run together and aren't separated appropriately.

First of all, I just wanted to say that stories that are written in 1st person where they seem to speak to the reader with statements such as "you must be thinking..." are not my cup of tea. This is nothing personal against this book, it is all books written in this style. Secondly, at the time of writing this review, I have not finished the book, so it may not be 100% accurate. So, without further ado, my review:
The grammar is technically accurate in most places, but isn't the common way of saying it, however, it is mentioned in the a/n that English is not their first language, so this is understandable. So far the speaker is just narrating their difficult yet average life, so I can't mention any faults with that. The only thing is, I like detailed passages, so maybe long or more detailed chapters wouldn't go amiss, but that's my only complaint really. Overall, the book is quite good, and I don't have numerous complaints, so well done!

Okay, so I liked the idea of the story, but the way it panned out not as much. The plot was good, a sick bitch tortures those who have wronged them ends up being killed by her equally sick ex/victim. However, for me, it felt as if you started in the middle of the story -and sometimes doing that is good- but if you do that,, you must provide as much backstory as possible in the upcoming events. The story was also a bit hard to follow because of the layout and formatting of the text, we made me read it as if it were a poem, but the words clearly showed it was a story. I liked your descriptions of things but there are quite a few grammatical errors that I noticed, like in the first paragraph where you wrote *seeing how they begging to be free for the torturing action." It confused me and made it hard to read. As a tip, when you proof read your work you should read it aloud, making it easier to pick up on things like this. And I know it was meant to be a short story but things felt rushed, like you'd tried to fit a whole novel into those three chapters. Maybe adding more of the aforementioned background details or slowing the tempo of the events would have slowed the pace down a little. It also felt like you were trying to fit in all the genres, such as erotica, thriller, horror etc. which just made it feel sloppy and confusing, and didn't come across as a clear theme. As I said, the idea is good but the way it panned out suffered a little.
This is just my opinion, so don't take it too much to heart, as this just isn't my cup of tea.

Please leave a review as it helps me as an author to understand how I can develop my story and write better stories in the future. It also helps others as readers to decide whether or not they read this story. Please could the reviews be helpful for reviews be helpful, for example explaining why you like or dislike it is 10x better that saying "its good" or "its trash"
Ty --P. A.E

I haven't finished the story, but I can see the overall them here, good plot except until about chapter 6, it was a bit repetitive. For example, not to spoil but why is he always saving her at the last second? And in the first few chapters, the narrator kept on interjecting with 'this is the start of their adventure' etc. It was a bit annoying and felt out of place for me. Recently, the grammar started getting worse too, it was manageable in the first few chapters, but as it got on, it was worse and irritating. Like when sort was mistaken for sought. Overall good book, could use a little work though

I loved this whirlwind of adventure, with the romance deviously twisted in between. Her innermost thoughts were loud and clear and I absolutely loved kt

The author of this book has been awaiting this review for quite a while, so I thought I'd finally read the book and get on with it. I haven't finished the book and quite honestly, I'm not planning to. I can honestly hope that for those who do, it gets better. The description was way too long and confusing and did not make much sense to me at all, As I read the first chapter, there were many sentences that were contradictory, for example: "It was the same noise she heard before although a little different but sounded alike." .
The story is too fast paced to me and there is no real setting of the scene. As well as this, many of the sentenced have grammatical errors, punctuation and spelling issues, and incorrect word choices. This makes the story hard to read.
Thanks,
-P.A.E

The Best Of Inkitt Contests