So grateful to be sharing my world with you | T, Kait, Annie, Shreeya, Denny, Swiftie, Moon | Hold my issues up for all to see like show and tell, a lot of people know me, but not a lot know me well.

Ashley Taylor and The Unknown Forces 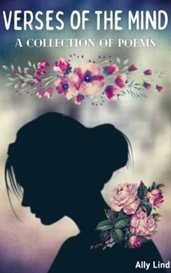 A collection of poems

15 year old Evangeline Addington begins to see a hooded man in her dreams, she wants to escape his mental hold on her, but with no one to believe her she's afraid she may be trapped with him foreve... 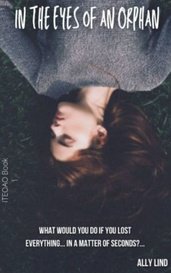 [ITEOAO Book 1] - You wake up in an unfamiliar place with people you don't know, in a room you don't recognize, but when you look across the room, the only thing or rather, person that looks famili...

[ITEOAO Book 2] - A surreal tragedy where the young orphan, Nicole Walker, after being adopted, finally comes to grips with her parents’ untimely passing. With her mother’s spirit by her side, and... 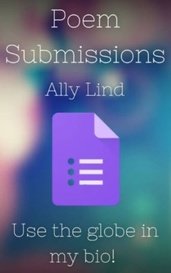 A collection of poems written by YOU

The plot was very hooking and I'd love to revisit this book in my free time. I really loved the characters and and how attached I got to them all. I apologize for the short review but this book is just too good for words. Keep up the good work!!

Overall, the plot of this story is like any other teen romance/drama. I really loved the plot!

There are some part where you mix up the character names, and I can't tell who's speaking, who she is speaking to, or which character you are trying to talk about. The usage of swearing is normal.

Your writing style is average for your caliber of experience, as far as writing goes of course. The dialogue was amazing! There was some repetitiveness that could be dwindled down. And your paragraphs and pieces of dialogue need to be spaced out more, it makes it easier to read.

Please don't think I am showing hate in any way, it's not my intent. I was leaving my honest review, along with some tips to help you. I will continue to read this book in my free time and edit my review if need be. I can't wait for more chapters. Hope this helped you! 🤗😊

These had such an effect on me, even though they were only two lines. I have chronic nightmares so I probably shouldn't have read this, but I LOVE two sentence horror stories. I used to watch horror shorts on TV, but i had to stop because it made my nightmares worse than they already were.

And when I clicked on this I intended on only reading a couple so not to cause really bad nightmares for myself, but it was like I got sucked into a reality that wasn't even there.

Great job! Props to you!

I think your writing style is very captivating, no complaints there. The only problem I have with this is the fact that it's a werewolf book. I've never really been able to get into these kinds of books. But with this one, I think I'd continue to read it in my free time.

I hope this doesn't cause you to refrain from reviewing and leaving comments on my books.

I'm sorry if this review is upsetting but, I just couldn't get into this book...

The grammar needs work that's one thing. And I couldn't get hooked to the plot like other people were. And in general this just isn't the kind of stuff I read.

I hope this doesn't make you refrain from reviewing my work...

I loved everything that this book had to offer! When I thought you had surprised me to the full extent, I was surprised even further. I feel each and every word that you write and that is why I fell in love with this book. I really hope you post more poems. You have a gift, don't lose it.

It just needs to be edited a little, and the plot needs to be polished a bit, but overall, I see potential. Please don't stop writing because of me!

I am so proud of what I have made..

I am so very proud to say that I have finally finished writing my book! I am really proud of what I have overcome to make this possible! I started out scraping the bottom of the barrel for support, and now, I have all the support I could only dream of before. I want to thank all of my readers for sticking by my side throughout this whole journey.

I am really, really sorry..

Okay, right off the bat, you said the onomatopoeia 'beep beep beep' and added "my phone beeped", all you needed to say was "my phone beeped" and leave it at that. Also, in a novel, you should NEVER write as if you are texting someone. And one more thing, you obviously didn't know how to write the details of the surroundings, and you tried WAY too hard to do so. You should have started with,

"I woke up in total darkness as I heard the ringing of my phone, I reached over and searched my night table with my hand until I found the pull-cord and switched on my lamp. I grabbed my phone and the light projected from it pierced my eyes, I blinked a few times and eventually got used to the brightness. I looked at my notifications and saw that I had a missed call from [Whomever called]" Then just take it from there. I hope this helps.

I'm really sorry if this was at all harsh, in any way.

This book is a rip off of Phineas and Ferb, the cover has nothing to do with the book, and it doesn't even state why they are even orphans in the first place, I don't get what they 'threw away'. I'm sorry to be so harsh, but damn.. If I could, I'd rate no stars. Again, so sorry.

I am a huge fan of Vampire Diaries and Legacies, so I was excited to read this. The summary seemed promising. But I don't really follow the overall plot of the story and it was hard to get hooked and keep reading. You could try adding some more detail and emotion to it. More of a dark element would make it better. Things like grammar and writing style, and the overall main plot of it all could use fixing, but it's a newer story. So I guess I just have to see what happens. Don't give up!

I haven't read much into the book, but just based on the synopsis I think it is going to be an amazing book with so much potential, which is why I gave everything 5 stars, because I see so much potential in this book!

And as for the first chapter/author's note, I know exactly how you feel about your bit on constructive criticism, I have been torn down by one person about my book on Royal Road calling it "Unrealistic" when it is clearly labeled 'Fiction'.

Anyway, I just want you to know that I will be with you on your writing journey every step of the way young friend! :)

This book has a great storyline, I can't wait to read more! You are really talented and I hope you keep writing!

When I read the sentence where Lucius shot Oliver, I had to read it a couple more times, because I just didn't believe that had just happened, I just thought I read it wrong. It's sad how something so horrible could happen to someone so young, who had no clue what was going on, except for the fact that his sister was in pain. I really think the dad should have had his children help, instead of putting his family in danger. I started to tear up when Oliver got shot. Because, just imagine, just a few seconds ago, he was alive, and happy, and loving his sister. And just a few seconds before his death he was reaching for his sister, I couldn't help but cry at that part. I wish Oliver didn't have to die. But, in a way, It was his own fault, because his sister told him to stay put no matter what. I'm not saying he deserved to die, because he did not. He was young, and the last piece the wife left behind. Speaking of the dead wife, In one of the chapter, unless you already have, but in one of the chapters the dad should be looking at a picture of his wife, sitting at the dining room table, after his daughter gets kidnapped, and think about his wife's death, and he narrates the death story. And he looks at the picture and says something like, "I'm so sorry I let you and our daughter down. I don't know what I am supposed to do now, she is going to be permanently changed, she will never be the same." I don't know, something along those lines. I hope this review helps. Keep writing, you have so much potential!!