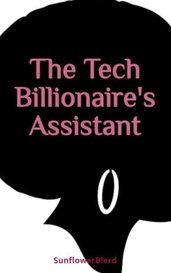 Octavia Wilde finds herself working for NONE OTHER THAN the unbelievably handsome tech billionaire Raemon Kentworth. He's hot. He's ruthless, He's waaaayyyy out of her league. He only notices her w...

Thoughts : from killing myself to healing myself by yealovemyselfmore
Overall Rating
Plot
Writing Style
Grammar Punctuation

I always find poetry on more relatable topics interesting. Tackling depression, insecurities, and self-harm in poetry can be challenging, but it almost feels natural. Most of the rhyming schemes were good and the poems were short and sweet enough.

Since it's poetry, it's hard to critique. What i'm giving is just my personal opinion--depending on your goals as an author, it might be better not to take it.
I would only advise that you go more in depth with the details. Have more lines that reference something you as the author specifically experienced. Poetry is always more powerful when it comes from a place of absolute truth.

This seems like the perfect supernatural/fantasy/romance read. Right off the bat we've got vampires and werewolves. The main female character seems like someone the reader can relate to; but also empathize for, knowing her troubled past.
The writing is good, a few grammar/editing issues-but ones i'm sure the author is aware of and will correct.

The only thing I suggest is starting off with giving the main female character more depth outside of her tragedy. It would help the reader if they do not go so long into the story only seeing this girl in light of the bad things in her life. Maybe show more of her rebelling against her circumstances? From her actions we see she has a strong spirit, but from the narration at the beginning that isn't clear.

I liked the characters of the story. Having a character who starts out as a famous teen model adds an element of interest to the story. It's something out-of-the-ordinary, something that readers would be excited to experience through the character's life. But you can also see the main character's personal challenges; how she feels alone and her self-image issues, and that is something readers can relate to.
I would only want the writing to be more alive. I want to see things happening as they did to Emily. Readers don't have to be told what is happening in the story...they can be shown. For example, the line in chapter 3: "Currently, because of the recent scandal, her dad's business wasn't the most popular around.' instead this could be expressed as 'No one asked for her autograph anymore, or begged her to hang out with them. Not since the big scandal at her dad's business,'
With a sentence like that, the reader is informed of the scandal--which has changed her father's business' popularity--but we also get so see directly how it affects Emily, in a way that we experience the feeling along with her. We identify with how she feels by seeing what she goes through, rather than being told what she is going through. Keep that in mind as you write; just connect with the character's emotions, feelings, experience and write that. Readers will understand what you mean.
Good job.

Good start to the story; interesting plot and character set up. Skyleigh seems like someone alot of people can relate to, or someone they'd empathize with. I certainly did.

Not sure what the author plans for the rest of the story, but so far I can't see how the title
Social Outcast' relates to the story. The main character is a social outcast, but this seems to be heading in the direction of being based on Skyleigh and her parents. Might want to reconsider changing the title if the story main conflict wont be solely based on her as a social outcast.

Also, just want to note that having her own father shoot her was rather shocking, i'm hoping this will be explained later on. As a reader, i wanted to know why he'd do such a terrible thing. Obviously this man is a terrible person, I hope the author will take their time to show the reader just how terrible he is. That we will get to see how he treated his daughter/wife in real time, and not just have that described to us.

Writing from the Character's Voice

Good story, full of elements that pull on someone's heart strings. Right from the start I sympathized with Nico and was rooting for his and Ryan's relationship. Abusive families can be a hard topic to tackle; it's challenging to put that in writing. From your writing I can see you are driven to communicate emotion; your stories are meant to inspire empathy. I think they work well to do that.

My concern is I found myself confused as to who was talking in the story. At times it felt like the story was Nico's voice, but quite often it almost felt like the author was placing their own ideas onto their character. For instance, Nico's family is terrible--as a reader you know that. But how would Nico know that? If he lived with these people all his life, wouldn't he be more likely to downplay their abuse, mistakenly thinking that was just the way parents were? Reading about Nico mentally calling out his parents for their bigotry seems to come out of nowhere.

For example, in chapter 2, Nico thinks 'Or would that be too much for this Christian household. oh, wait we're not Christian, you just dislike gay people.' and later on: "...and they were good influences? Hitting me and yelling at me? They were toxic.'

I found myself wondering how he came to the point of realizing how terrible his parents were. However, I didn't need to author to call them out for me. Already from reading the story, i sympathized with Nico. Seeing how his parents treated him, I didn't like them, I identified them as being toxic. That was an act I, as a reader, got to do on my own--which has more impact than if the author prompted me to.

My suggestion would be to work on separating your voice, as the author, from Nico's. It has more impact if the reader gets a say in determining who the bad guy is in the story, and WHY they think that person is bad.

I think you're off to a good start. You have a strong writing style that works to interest the audience with little details about the fantasy element you're working with. From the first chapter, mentioning the narrators 'horns' and 'clawed hands' the reader can tell that this may not be an ordinary story featuring an ordinary person/creature. That sparks the reader's interest. Also, I like the start of the story. As a reader, i find myself wondering what trouble the narrator is in--are they stuck somewhere? Are they trapped? It made me want to know more.
I'd only caution you to find balance between these moments in the story that spark reader interest, and actually telling the reader what is going on. As you add more chapters, make sure you are answering some reader questions and giving them enough information to keep them interested.

It checks off all the boxes that most readers like--we've got a rich, hot male interest; a spirited female main character, the jealous ex who hates Lauren... and there's Lauren's family drama that adds a layer of mystery.

However, i would still have liked more from this story.
Why does Lauren fall for him? If their connection end up extending past his money and good looks--how does this happen? Strip away the money and good looks--who is Mason? What makes him worthy of Lauren's affection? Also, Lauren could be built upon. Who is she? If you separate her from Mason; from his feelings towards her, what is left? What does she want out of life? What does she believe in?
I would have liked to see more of this throughout the story. The female main character doesn't need to be defined solely by the male main character.

I liked that we did get to see their relationship develop with time. I'd suggest building on this, show them doing more things together. They start off hating each other--what needs to happen to make the hate change into love? Dig deeper; get to know the characters and help us, the readers, get to know them.

Since it's just one chapter, it's hard to gauge how well the story is written. The low plot and overall rating is because of this. But i do notice a distinct writing style. The characters are introduced well, with their introductions being woven into the action of the story rather than just inserted. I feel that as the story progresses. we'll get clear, distinct impressions of each of the people.
Clearly there is tension between the MC and the Gwen/Roger characters. Curious to know what that is about; a good motivator to keep readers wanting more. It's obviously not the same old story of poor, abusive foster parents. They may be abusive, but since the writer indicated they were wealthy (shopping bags reference) we the readers are left wondering why. Why did these people choose to foster if they didn't need the money? Or are they fostering only for some kind of financial benefit which they are spending on extravagant purchases? What does that mean for the kids they foster--what kind of environment do people that selfish create for their foster kids? Most importantly, how has this shaped the MC?
My own personal recommendation is not to make it such that the main character's tragedies are the only thing that defines her. Misfortunes aside, who is the MC? Have some moments when you bring out her personality without it being in relation to the bad things happening around her. This could apply to all the characters moving forward as well. Make them people who happen to have bad things happening in their lives, not just people who have bad things happening to them. Show how their personalities affect how they respond to their circumstances.
Good luck writing.