Fate of the Fathers

After the tragic deaths of her parents, Jenna Glynn returns to her old hometown seeking some sense of closure. It's been ten years since she was last there, and she has no idea what to expect. She ... 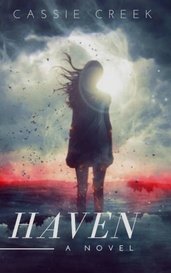 Something never seemed right to Haven about how her childhood friend, Reed, just up and vanished from her life. She's about to discover just how much she doesn't know about the world she lives in.....

I wasn’t too sure of what to expect when I started reading, but the author’s writing style and the consistency in grammar kept me going. It only took a couple of chapters to feel totally invested in the characters and plot. I like the authors approach to the subject content and look forward to reading future works.

Missing in the Pages

Every bookworms dream is to be dropped into the set of their favorite novel, and this story does not disappoint!

My main critique has to do with the over-usage of the ticking of the jaw. There are at least a dozen ways to describe this action. At most, I would only say it 2-3 times in the entire book, and make each one worded completely differently. It’s a very powerful image but when used excessively (every chapter, sometimes multiple times per chapter), it causes the reader to become an editor and draws them out of the story. This is not what you want.

Something that might help is to watch movies and see what else actors do while that muscle in their jaw tightens. Do they clench a fist? Furrow a brow? Narrow their eyes? Where do they look?

These are things to consider when writing about human characteristics. Overall, the story is great and keep up the good work!

The story is written beautifully! I love the flow of the chapters and the growing suspense. There are some grammar issues, it is still worth a read!

I love the way the author describes all the characters in the first chapter. The progression of it is so smooth and the information just the right amount. I also like the stories we get about some of the characters, in order to understand better who they are.

I’m thrilled to see how it continues!

It is well written with no noticeable mistakes in spelling and grammar. The characters are interesting and the amount of detail the reader gains, is slowly fed over the course of the chapters, instead of given all at once. I appreciate the descriptions of setting and the humor sprinkled in with the dialogue.

There are only a couple of chapters at this point, but I look forward to seeing where the story goes!

Rachel is a very talented writer and sets up this story so nicely! From the intriguing characters to the descriptive setting (you don't get much better than angels and steampunk!), I can't wait to see where she goes with it.

The story flows great, and right away, the reader wants to know more about what is going on. There are no obvious grammatical errors and paragraph/chapter length are easy to read!

This was one of the first books I read after joining Inkitt, and it was not disappointing! K.D. does a great job creating and developing the characters and story. Highly recommend!

It’s only a couple of chapters so far, but leaves me intrigued and wanting to know more. I look forward to seeing where the story goes. The author has a writing style that is both easy and delightful to read.

I wasn’t sure what to expect when I sat down to read this novel, but it absolutely did not disappoint! The author does an amazing job forming the characters and developing the story plots. Within the first five chapters I was hooked and my curiosity about what the rest of the book would entail, only grew from there.

The fantasy world, as well as the various languages that we hear throughout, were well crafted and I found it easy to feel submersed in this story.

If you are into fantasy, romance, action, adventure novels, I absolutely recommend giving this book a read. The author writes in a concise, fluid way that any aspiring writer should take notes on and learn from. The style reminds me of many published authors with bestsellers on the market.

I thoroughly enjoyed reading this book and look forward to reading future works from this author.

First off...Wow! I was drawn in from the very start by the author's ability to tell a story. The suspense, the action, dialogue, characters, everything was on point. It is definitely a book I would buy if I saw it on the shelves.

The title caught my eye, as it suggested something dark, which I was in the mood for reading. As I realized it was a werewolf novel, I expected cliches or a predictable storyline, but this book is anything BUT! It was so easy to get sucked into this town of Twin Peaks and and the characters as they unravel of the mysterious murders.

I normally find it difficult to remain "in the story" when the POV switches often beneath characters while being written in the first person, and sometimes I had to catch myself reading a chapter, and not realizing who's view it was, since it's not a habit to look at the POV description at the beginning of the chapter. But once I figured it out, it was okay.

I gave the story 5-stars because it truly is written by a person who has learned how to tell a story and does an impeccable job of it. But, as a critique, it might be worth exploring other ways to switch the POV, even just changing the writing from 1st person to 3rd person. It makes it easier to change the POV without creating confusion for the reader.

Overall, I highly recommend this book -- especially to writers who are trying to develop their skills when it comes to story telling.

I'm really enjoying this book and Tinkerbelle's writing! The characters are rich and the story is good! Looking forward to reading more!

I loved this story! It was so disappointing to realize that it wasn't the complete novel! I will definitely be purchasing it to find out what happens.

Love the unique twist on the whole 'prince charming' culture. Great read! And congratulations on getting published! So exciting!

This is probably one of my overall favorite werewolf romances! As always, Emeline Rousselot does not disappoint! I get super excited when she releases new books/chapter updates.

When it comes to writing goals, Emeline is phenomenal. She is extremely talented in how she describes and interprets her characters and what they are going through. Keep up the awesome work!

I love Ancientt's books and get super excited when new ones are released! This one does not disappoint. I love the unique twist with the werewolf romance, and all the backstory to set it up. Keep up the great work!