Hey there and welcome! Posted is my story As I Wake. The continuation of the story is on my Fanfiction account (same username!) if you wish to read more. Book 1 & 2 are combined into As I Wake. Enjoy! 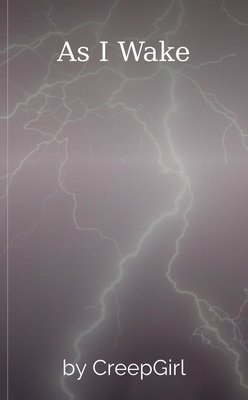 Lost has become a whole new meaning for her. Awakening in a brutal storm with no memories, follow her story as she discovers who she really is... that is, if she makes it that far. (Book 1)

Romance / Mystery / Based on Naruto by CreepGirl • Complete • 33 chapters

Sorry it took so long to review~

To begin, the summary was good. It drew me in.

As many people review here, you grammar needs work, Some of the sentences are wordy and awkward and took away from the story. Many were run ons or they needed commas. There were many instances where you used two words that mean the same thing in the same sentence (e.g reached up, headrest of his chair, strode forwards, very nearly, etc.) This is an example of wordiness. You only need reached, headrest, strode, nearly to convey your meaning.

Here's an example that I hope makes sense for you:
"Once he was secured, he pulled on his helmet and sealed it into place against his suit."
How about instead:
"Once secured, he pulled his helmet and sealed it into place."
Hopefully you can see the second sentence is 'getting the biggest bang for your buck' we as the readers assume its against the suit.

Here's another:
"A tingle started at the base of his skull that traveled through the rest of this body before finally stopping at his toes as the neural link between his body and the machine began to form."
Now try this:
"A tingle at the base of his skull traveled through his body before finally stopping at his toes, initiating the neural link between man and machine;"
Another tip, I have a problem with this too, but try to use 'as' sparingly. It easily gets redundant and if you read your work with that thought in mind, you would be shocked how many times you use 'as'. I always am! Instead, you can use descriptive words or verbs. The example above shows this,..

To continue, the characters are great in the sense that they have their own personalities and a reader can easily describe their personalities to a person who never read the book, which is good.

You include descriptions words of the characters fairly. Some more couldn't hurt. For example, I don't recall many, if any descriptive features of Gabriel. You have eyes and hair descriptions for some, but some others you can use is height, skin tone, signature facial expressions, body type, clothing style etc.

The plot was great and like others say it has a Gundam feel to it while still being your own. I can tell you are very creative and can develop scenes and actions easily, it's putting it to paper that is hard. I'm the same way. I have so many ideas and how I want to weave it around a single plot, but on the paper, it becomes word vomit, But it gets easier with practice, I promise!

Something that no one mentioned, but thought this could be a good add to the story was when Gabriel was on the Dillo reminiscing to what Fairy and Chance were doing while he was gone -- to make that into it's own chapter. I think that have a chapter where Fairy investigates and drags Chance along to find Gabriel and - based on her character- have a sneaky suspicion that Gabriel isn't who he says he is- but never admits to thinking he's the Archangel-- would really develop those two characters. Chance doesn't get many chances to show the funny guy persona as Gabriel describes and it would also show how much Fairy cares for Gabriel.... potentially more than a friend?

Continuing with characters, one last thing. I think Jayce should be introduced a bit sooner. Perhaps create a scene while they are on the Dillo where Gabriel witnesses and realize that the ELA are just people. You say he thinks that, but having him witness and experience that I think would make a bigger impact to the readers. There are a few instances where what Gabriel thinks should become an action in the story so that the readers can come to the same conclusion- rather than Gabriel just thinking and "telling" the readers.

These critiques are just showing how much I ENJOYED this story and hope these tips can make it that much better! I've haven't read many 'Gundam' / space books, but I thought this one was really thought out and I could tell how much effort you put into it. I hope you work on a sequel and if you ever need a person to bounce ideas off of or need assistance with editing, I would be perfectly happy to help!

P.s. voted for you in the contest. BYE!