In Elsa's Hardcore Erotica, Randy Guys Meet Gorgeous Girls and Everyone Lives Hornily Ever After! 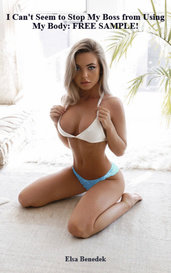 I Can't Seem to Stop My Boss from Using My Body: FREE SAMPLE!

Join Ella on her Summer of Submission... Where she loses control of her body to her boss by day... And her prostitute-roommate by night... Soon, everyone she meets wants a piece of Ella, to see ju...

This is a charming, fast-paced novel that will appeal to both fans of Minecraft and fans of erotica featuring non-humans.

Two things that might make the book a smoother read? 1) Shorter paragraphs are easier on the reader. 2) There are some “alternate” chapters that do not contribute to the main story. Rather than sticking them in the middle, maybe it would be best to put them at the end as bonus chapters.

All in all, an imaginative, spicy and explicitly fun novel that adds a new dimension to a popular game!