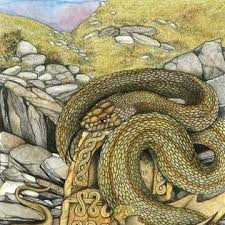 For this challenge I thought we’d do a good turn and take a look at BRG’s book “Myths around the world.”

In his first chapter he has a list of Four UNUSUAL Dragons. I thought it would be nice to read up on them and then each of us take one to use in a short story or snippet. Whichever works best for you. Then post our work back here. As for me? I have an idea for a “Modern Fantasy” short story. Envolving a Cantabrian? Hmmm

Question: Do you want them all to be modern fantasy and Cantabrian or is that what you personally want to do?

research. A writer challenge that is just for fun needs to be easy if you know what I mean`?

I'm thinking example This is going to be a story about an Alpha wolf/Lycan or other shape shifter that meet his mate.... Or this is about a rogue...

I liked the idea that Isha (can't tag Isha) have about starting the first/last line with... That is a good idea as long as it isn't a hard one that will scare away writers when its short time. A short writer challenges that is only for fun needs to be easy.

But if inkitt want more writers to give it a try than give them a "carrot"? (Swedish expression for something to look forward to)  Like if you win then you can choose a story of yours to be highlighted for a whole day/3days a week or we will read it and give you our thoughts about it or we will read 5 (or more) chapters. A price doesn't have to be money or stuff like that just a little something like a review or everyone in the challenge read each others work and review it

I personally that has dyslexia would love the feedback from someone that has more experience that I have. But this is just my thoughts...

Sandra oh sorry that was a long one 🙈🙈
1
Hayden D. Linder

Hayden D. Linder @Lex There's a good description of the creature in BRG's first chapter. So I thought it would be cool to read it and then the writer could decide which creature they wanted to work with. As for the Modern Fantasy, that was just what I was going to ... See More
do. You could choose whatever setting you wanted. I just wanted to support one of our own with his work and do something fun for us. I like the reward option you came up with. But I'd have to talk to "Mod Isha" and see what options we have for that.
Like this? Reply Posted
Remove Report

Sandra I read BRG´s first chapter I don't know if it's his/her own creation or if it is actually mythology I didn't google it lol but for me personally I want to know more before I write something lol I do more research than I write because I use places, ... See More

mythology as a basic before I twist it, but like I said that is just me.

Another idea is to do small one shots. Or let them use their ongoing stories that was published max a month ago or less, a story that aren't complete... Or do a challenge and let them use their published work to create the interest for a new story challenge. I think that people that are already writing stories (like me, I have 3 ongoing) easily get scared away if it´s no easy.

I understand if you don't want erotica or very graphic violent scenes, but try to put as little limits as possible and do more advertising about the challenge. The way I see it Inkitt is great, I love it and it has the potential to become absolutely awesome😍

Sandra I made heart, eyes, smile and not they look like?? I think that my Loki is here playing tricks on us lol
1
Hayden D. Linder

Hayden D. Linder I definitely like your ideas. And we will be doing more of these. So I'll try to implement more of them on the next one. But I need to get some input from Isha first. AND So far it is pretty open if people want to do more or less or use something ... See More
they have. That would be OK. This is really just an exercise in getting us a "little" out of our comfort zone. By using creatures we're not accustomed to.
1
Sandra

Farrah Khan Al-Mousawi Thanks for the invite Hayden! Not sure how I'm supposed to become a member of this group or even how to post, but your idea inspired me to write the following:
Like this? Reply Posted
Remove Report

The sound of bloodcurdling screaming woke me up. It was coming from outside.

I leapt out of bed and bolted to the window to see what all the commotion was about, yanked up the blinds and there it was. A giant, fire-breathing dragon demolishing

Well, at least I could thank 2020 for its consistency.

First the fires in Australia (A), then Kobe Bryant (B), the plague, better known as Coronavirus (C), and now this (D).

Another one for Alphabetised Apocalypse bingo.

“What do you suppose it is?” My twin Elora asked as she crept up beside me, pushing the glasses further up her button nose, which had a tendency to sweat when she got overexcited.

“What does it look like?” I replied with an eye roll. Despite the certainty of impending doom, there was always time for sarcasm. “It’s a fucking dragon.”

“I can see that, Danan.” Yep, you guessed it. Our parents were big Willow fans. “I meant, what kind.”

She proceeded to pull a book off one of the many badly made Ikea bookcases on her side of the room and began to flick through it.

“Aha!” Her eyes lit up in triumph as she handed me a tattered hardback copy of Myths Around the World. “It’s clearly a Culebre, better known as a Cantabrian. See the pattern of green and gold scales? Their spit is said to turn into a magic stone which can heal disease. They live in caves where they guard treasure and keep fairies as prisoners. On Midsummer night, its power is weakened and it’s possible for a hero to defeat the Culebre and make off with its treasure and one of its fairy hostages for their own. Midsummer is three nights away.”

She shut the book with an ominous slam that made me jump out of my skin, though I tried to hide it by glowering at her.

“Maybe you could slay the dragon, cure the Rona, and finally get yourself a date in one fell swoop.”

Farrah Khan Al-Mousawi Hope you like it!
1
Hayden D. Linder

hoodiegurl76 not sure how to implement the creatures but seems fun... is there a proper deadline for it?? also could someone show me the ropes to actually entering the challenge? I am kinda new here on wattpad lol
1
Hayden D. Linder

Hayden D. Linder For now we're going to try no deadline. I want people to get involved but don't want to put any stress on them. As for entering you simply, write the piece. Post it on your Inkitt page or another public place. Anywhere where we can go to read it. and ... See More
then just post a link in your response to this thread.
Like this? Reply Posted
Remove Report

Hayden D. Linder @Farrah I LOVE that submission. Thanks for posting it. As for joining the group you were already a member. To join a group you just have to post a few times until the system places you on the member list on the left. Any plans to continue that snippet about the Culebre? :)
1
Farrah Khan Al-Mousawi

Farrah Khan Al-Mousawi @Hayden I'm so glad you enjoyed it! I would love to write more when I get the chance. I'm currently in the middle of redrafting my novel and trying not to get distracted, but your challenge was just too tempting!
1
Hayden D. Linder

Love Nepal How can I submit my story for challenge?
1
Hayden D. Linder

Hayden D. Linder Hey Kriti, You just post it here in this thread. Or on your wall and put a link here for us to read it. Or if it's HUGE put it on your stores list and give us a link. :)
Like this? Reply Posted
Remove Report

Hayden D. Linder @kritimandal Hey Kriti, This link is to a Romance novel you wrote about Werewolves. So I think I misunderstood your question. When you asked how can you submit your story for a challenge. What exactly were you expecting? I mean, how did you want your story to be used in a challenge?
Like this? Reply Posted
Remove Report

Farrah Khan Al-Mousawi @kritimandal You need to write a new story as per Hayden's challenge re. Dragons and post the link here.
1
Hayden D. Linder

Reply Posted
Remove Report
{{groupPost.name}}
Like this? Reply Posted a few seconds ago
Remove
Back to Group

Are you up for the challenge?

Post and respond to writing challenges in this group! Give writing tips to other authors, and discuss issues related to plot development, atmosphere construction, character construction, love scene writing, etc. in the Werewolf and Fantasy genre.

Please DO NOT use this group for self-promotion. Read requests and posts with no other purpose than to promote your own stories will be deleted.