Daily updates here on Inkitt <3 I'm Jyvur. You can call me Jy. I'm a pessimist and chaotic neutral who knows everything about the Columbine massacre. Most of my books are on wattpad. 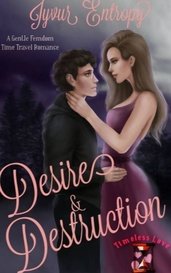 Two people. Two ruined lives. One timeless romance. With both of their lives in shambles, Cole and Ingrid apply to take part in Speculative Science Enterprises' time travel experiment. This ground...

This story was so brilliant! It captivated me from start to finish. It seems like the price co is meant to be a microcosm of society and wow! I especially loved the records they found in the offices. So much of what former subjects experienced can be seen in the world today. Like how women became dominant and started aborting their own babies to slow population growth. With feminism now little more than rampant misandry and abortion-not accepted but celebrated as some act of empowerment; the parallels to the modern Western world were astounding. As somebody who has written a lot about incels and the manosphere, I especially liked the whole part about how men could no longer compete successfully for women, they'd given up trying and reverted to focusing on their hobbies and porn.

I believe Jeffrey's character may also have been a reference to the current state of the sexual marketplace and modern masculinity. Although, as much as I liked all his waiful references and such, his character was one that fell a bit flat for me. He's straight up cartoonish at points, and not so much a 3D believable character, but a talking meme straight off of r/justneckbeardthings.

Hugh was probably my favorite character. I liked how he tells off Melissa-telling her can speak up for himself if he has something to say. That paired with the overall ridiculous nature of Melissa's character seemed to me like a call-out of the left's bigotry of low expectations.

I also liked how the story draws parallels between the "original sin" of being white and Christianity. The whole SJW spiel is very similar to religion in many ways. But it's worse, because unlike with Christianity, there's no way to absolve oneself of the sin of being a white/cis-het/male.

Overall, this story was just incredible. It kept me guessing all the way through. The shadow people were so eerie. The way they found the skeletons in the vents and in the cavern. Such creepy imagery.

This is the first story I've read on Inkitt and I was not disapointed.