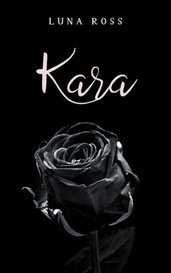 Kara White, a lone werepanther, has found herself skipping town once again. This time she ends at Moore, a quiet town intent on unraveling the history behind her bloodline. Between meeting her poss...

Overall, I love a great werewolf romance with some twists and tension in between. I do have some suggestions and tips, some of which I'm also working to improve in my writing. I do not want you to feel offended or discouraged. There are some grammar errors; for this, I suggest using Grammarly (free version). I also felt like I couldn't connect completely with the character because the descriptions of her emotions and behavior seemed to be a bit cut short. It can be paced with descriptions of how are her emotions unfolding and her physical behavior. For example, 'my head throbbed with the onslaught of never-ending questions.' or 'the ongoing mayhem had created a slow ache behind my eyes.'

I do hope this review can be helpful. This story has great potential; the plot you have created with an Alpha female to lead is awesome. Never give up. Keep up the awesome work!

I must confess I'm a sucker for werewolf stories. This book has a promising and captivating plot, and I can't wait to read the rest of its' development. Based on the prologue, I do have some tips and suggestions. There are some parts where you tell instead of show, for example: "He is on his knees, and I can see his pain" , instead of writing that she sees his pain you could use physical descriptions to emphasize that pain. Maybe his brows furrow or his eyes plead, or he places a fist to his heart. Dialogue tags can be replaced with action and/or descriptions of the ambient, feelings or expressions.

I'm hooked with the plot; it's something new and refreshing, with a promising dose of romance and mystery. It's been a long time since a vampire book had held my interest. The first chapter is very well written and serves as a great introduction of the main characters and the first conflict. The main characters are well developed with ranging emotions and characteristic behaviors. Reading the first chapter William actually reminds me of Elijah from the series 'The Originals'. I did feel like some of the character's physical descriptions were a bit thrown out there, although it may be part of your writing style, and that's great. For example, "William had a tall and slender physique with broad shoulders." I think instead of going directly to how he looks, you could describe an action: Are they tense, or does he roll his broad shoulders trying to let some of the tension out. Again, that's just what I think, you go with your style. Overall, I love the story and will keep reading. Keep up the awesome work!

Overall, the plot is very interesting, the characters seem to be well developed, and the author's writing style can easily hook the reader to the story. I loved the descriptions; everything seems to be well written for the exception of some minor errors. I do recommend re-writing the summary of the story without giving too much information. Also, Grammarly is a great tool for editing. Other than the minor errors I don't see any fault in the story; the descriptions are great, and the chapter is well-paced (it isn't slow). You're a good writer, keep up the awesome work!

This story has amazing potential. Overall, I love the plot and storyline although I do have some tips and suggestions. I believe a bit of background information is needed in the start of the chapter. This could be done by describing who is the man behind the seal and placing key sentences to explain why the woman even resides in the same building as him. You don't have to give his name right away if you want to keep the mystery, you can describe his status in the world of this story, why everyone fears him or what kind of creature he is, etc.

I suggest this because I honestly felt very confused regarding the woman's place in the story. She felt terrified but loved the man's intentions (very rough handling) at the same time. I think the amount of fear the female character is showing does not match her liking or her lust towards the male character. I believe the level of fear can be toned down a bit and you can add how much or what she likes by the man's sexual intentions because I honestly perceived it as a sexual assault from the amount of fear she was showing. This probably wasn't your intention, or it isn't the case, but some readers may perceive it as such.

Some of the descriptions gave a medieval vibe, but it feels like there aren't enough descriptions of the setting and characters to reinforce this. For example, you could describe the stairs, maybe there are torches, maybe the door is made of thick wood; describing the character's clothes (example: long dress), describing the room where they meet, etc. I also recommend describing a bit more the physical appearance of the characters: is he pale, are his eyes pitch black without a single shred of emotion, is she tall or short, is she tan or pale, etc. If it is a medieval period you shouldn't use "He spins her around and pushes her against the wall as if she is being searched by the cops." because cops aren't relatable to the medieval period.

"He spins her around and pushes her against the wall, running his hands over her luscious sides." could be an option.

Another tip to remember is that normal dialogue doesn't need to be in italics; italics are generally used for thoughts. When describing it is best to show instead of telling; this also something I have been working on improving in my writing. Here are some examples:

"Her eyes grow big..." could also be, "Her eyes threaten to bulge from their sockets by the sheer pressure..."

"When he pulls out, her pussy makes an air sucking sound." could also be, "He comes out of her weeping pussy with a resounding pop."

I really like the plot of this story and I think it just needs a bit more work in the descriptions to make it really spark. Sorry for the very long review; I always try to be as helpful as I can be and honest with my reviews. I hope this review can be helpful to you; I have nothing against your story and I do not want you to feel offended nor discouraged by my suggestions. I love romance and erotic stories. If you have a Wattpad account, let me know; I think there are a few books I could recommend you. Keep up the awesome work!

I like the plot of the story and how the characters are pretty well developed. The descriptions are great, though I do have some pointers and suggestions for the story in general. I did notice a mix in the chapter with past and present tense as well as writing in the first and third person. I recommend re-reading and re-writing the chapter choosing to either write in the first or third-person point of view, and I think past tense would also be a good choice. This is only a recommendation, you choose what is best suited for your story. There are a few errors and the chapter is pretty long; it could have been split into two chapters. Overall, I like the storyline and descriptions; it maintains the reader intrigued. Keep up the great work!

The story has me hooked from the very start of the chapter. The characters are well developed and the chapter accomplishes introducing the plot with the protagonist's experiences. I do suggest adding a bit more descriptions while referring to the characters as to not repeat 'he', 'her', and 'she'. This story has a lot of potential; it's bound to get even better with every passing chapter. Keep up the awesome work!