“Alright, alright, alright, time to get this party started!“, Krypto exclaimed excitedly as he hopped out of the van. Rushing to his room, he proceeded to connect to the speaker system of the bunker. Soon enough, thunderous dubstep began booming throughout the warehouse. The team were forced to cover their ears as the techno music bashed their eardrums like a police baton.

“TURN IT DOWN, KRYPTO!“, Mr Voodoo yelled angrily over the music- clutching the sides of his helmet. Frantically, Krypto dialled the music down a few notches- until it became mere background music, much to the kid’s disappointment. I once heard he has synthetic eardrums. Probably why he can handle such high volumes without his ears splitting in two.

“Seriously? Dubstep, dude?“, Wraith mocked as Krypto ran back out of the room. “Didn’t that go out of style, like, 50 years ago?“, she continued sarcastically.

“Every time... one of you has to bring it up! I like it, okay!“, Krypto responded bitterly, feeling slightly insulted. Mr Voodoo brought out a cooler of drinks and placed them on a nearby workbench- kicking off plumes of dust as he set it down. Opening it up, ice and drinks shone like a heavenly treasure before them. Voodoo grabbed a can of Marsblast. I’ll tell ya, those things are damn strong! Take your whole damn head off if you ain’t prepared. Natasha took a bottle of Flaming Moai, a much more... classy drink. Krypto stuck with his vials of Juice- as always. Ace grabbed a simple can of beer. Yep, we still drink beer in Twilight City. Wraith took a bottle of Moonblast- a drink with enough sugar to make your head spin in three different ways. Mr Voodoo soon raised a toast to the family.

Now, you’re probably wonderin’ how Mr Voodoo drinks in front of others- considering he’s got a helmet on at all times. He’s got a vent in the helmet’s chin bar which leads straight to his mouth. Pretty low-tech, but it works. As for Krypto, his Oni mask’s mouth automatically opens when it detects something tryna go into Krypto’s mouth. Some kinda fancy sensor tech- in complete contrast to Mr Voodoo.

“Well, job went off without a hitch, chooms! Perfect fuckin’ work today!“, Voodoo began- exalting his team with praise and respect, “As for you, Wraith... you’ve made a damn good addition to our family! So I wanna take this time to officially welcome you to the Ghosty Boys!“, Mr Voodoo continued. He then took on a fatherlier tone.

“We all know that money, fame, fortune, thrills, all that will come and go, But this? This will remain forever. We’re a family, and that won’t ever change. We oughta cherish this.“, Mr Voodoo finished- raising his can of Marsblast to his crew. They all did the same in response- each taking a sip, swig, or mouthful of their respective drink.

“Gonna make me tear up, amigo!“, Krypto mused- chuckling from behind the mask. The team all began drinking and laughing; however, Lillian seemed a little off put. Hugo pulled her to the side.

“You okay?“, he asked cathartically. Lillian seemed to be staring off into deep space.

“We killed people today. That doesn’t exactly sit right with me, Hugo.“, she responded in a low, downcast voice.

“Yeah, but that was Krypto, not you! Don’t put the blame on yourself. You didn’t hurt or kill anyone.“, Hugo resumed comfortingly. Lillian seemed to ease up at his soothing words. She let out a heavy sigh.

“I suppose so.“, she replied- looking up and smiling at her boyfriend. As she did so, an escort of vehicles rolled into the Ghosty Boys HQ.

“Looks like our buyer’s here”, Hugo announced as he fell in with the other crew members behind Mr Voodoo.

“I’ve got something to give you, Wraith.“, Natasha whispered to the girl beside her, “But I think it can wait until after this.“. Lillian suddenly became suspicious. Worried, even. Those weren’t cop cars... especially that Lambo. Lillian had seen it before... but from where? And who owned it?

Anentourage of blacked-out armoured trucks pulled up in front of Voodoo. In themiddle of them sat a blacked-out Lamborghini Terzo Millenio- a vintage car byTC standards. But damn is it beautiful! It’s like a damn batmobile with all of its sharp edges, curves, and vents. I’ll throw in a picture here because words just don’t do it justice. Not even an ounce! 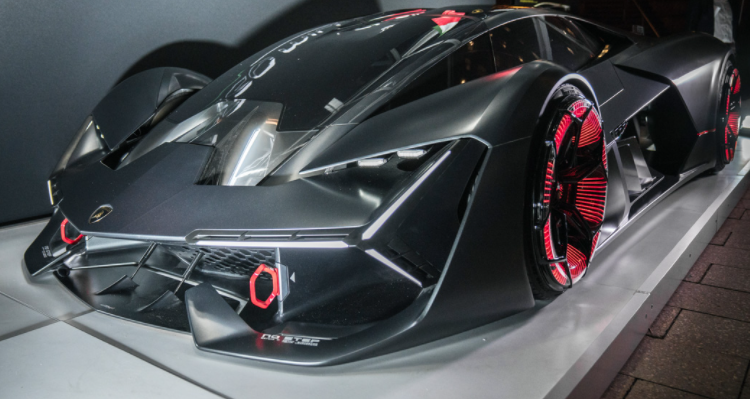 Numerous burly men in dark suits stepped out of the armoured trucks- standing sternly and professionally. Their form was perfect. Their positioning was perfect. Not one inch off. They stood still- facing forwards with stoic faces. Stepping out of the Lamborghini was a man dressed in a racing jumpsuit- stamped and plastered with countless company logos and branding slogans, like a myriad of body tattoos. The mystery racer wore thick, armoured gloves of a cobalt blue colour with red outlines- to match the jumpsuit- along with a pair of sturdy boots. His helmet was blacked out, surprisingly with no logos on it, and a thin, silver visor ran across its front. On the right side of the helmet, the name ′Silver-Skin’ was etched in sharp, jagged font.

Now, lemme tell you about Victor Silver-Skin. He’s a big leaguer. And one of the best, if not the best, racer to ever grace the TC Street Racing League. Born in Sweden- given the very thick and noticeable accent- Silver-Skin became a renowned, yet unaffiliated, TC street racer before the League began- under the racing name ‘Chrome Boy’. Damn, I remember Silver-Skin. Damn good drifter, almost perfect. Damn good racer, too. Hell, the guy could do anything behind a wheel! But, his success ain’t legit- as I’m sure you deduced, given that he’s buying parts from criminals. He’s heavily corrupt. Seems like he’s involved in some kinda scandal every other day. Oh, and he’s also VERY wealthy. Like, Scrooge McDuck levels of wealthy. Corruption and crime pays damn well in this city.

As to what he looks like, he’s a typical blonde-haired, blue-eyed pretty boy with a strong, chiselled jaw. His hair’s usually styled upwards. Nose and mouth are very sharp and defined- almost like a statue sculpted in stone. He stands at an intimidating 6 feet tall- just shy of Mr Voodoo.

“I trust you have the parts?“, Silver-Skin said, approaching Mr Voodoo and his crew.

“Yeah, ’course. But you know how we operate. Payment comes first“, Voodoo responded with folded arms. Victor chuckled and nodded at one of his armed guards. A notification came up on Voodoo’s phone. Payment of $1.5 million. Voodoo smiled underneath his helmet widely.

“Parts are all yours.“, he said. Silver-Skin beckoned four armed men to take the crates and load them onto the trucks. The Ghosty Boys watched as their goods were traded for cash. Armed guards hoisted the crates into the trucks.

“Pleasure doing business, as always, Mr Voodoo.“, Silver-Skin said, holding out a hand for a shake of approval. Mr Voodoo obliged. Soon enough, Victor and his escort had turned around and were heading out of the headquarters. As for Lillian, her morals had just been shattered. Out of no choice of her own. She raised a faltering voice at Hugo.

“You told me the job was for TC police! Not some corrupt big-league racer!“, she began- staring Hugo down with fiery eyes in front of the rest of her new family. “You lied straight to my damn face!”

“Lils, I was just tryna protect you-“, Hugo started frantically.

“PROTECT ME? By forcing ME to BREAK my own CODE? Out of NO choice of my own?“, she continued- eyes sparkling with tears of heartbreak. Her own lover... just betrayed her. Lied to her face. Painful tears rolled down her face, voice faltering and breaking.

“You made me go against my morals! Everything I stand for! Everything... I... I believe in!“, Lillian finished- staring Hugo down with innocent, bloodshot, teary eyes.

“I just wanted you to follow your dreams! I... I...“, Hugo faltered too, trying to compensate for his earlier lies. It was no use. He placed a hand on Lillian’s shoulder, but she threw it off forcefully, taking one last scornful look at him, as if to say, ‘we’re done’. That glance looked razor-sharp. Sharp enough to kill a person.

Lillian stormed off from the group- the ramp lowering to let her leave. Krypto held up his phone to stop it from opening, but Natasha held his arm down. She shook her head at him. Hugo wanted to protest further, but it was no use at all. The words were jammed in his throat. Deep feelings of heavy regret chained his heart- weighing it down, almost to the bottom of his chest. His head dropped slowly as he let out a painful sigh. Mr Voodoo put a cold hand on his shoulder. Hugo didn’t even notice the sting.

The doors of the bunker closed with a heavy crunch. Lillian was gone. Hugo’s heart had shattered like glass. Into thousands of excruciating, sharp pieces. And so had her’s.

All because of one damn lie.