“I’ll be close-by if you two need assistance. Just blend in and keep watch on ’em both.“, Krypto ordered as he surveyed Natasha and Mr Voodoo over the cameras in the bar. He sat in his Dodge Conqueror in a nearby alleyway- secluded and hidden from the judgement of the world. Feet on the dash, and laptop on lap, with a pack of Juice vials in the back seat. Just how Krypto liked it.

MrVoodoo and Natasha entered the bar. They had all the necessary precautions. MrVoodoo now wore a mask which vaguely resembled a gas mask in shape- instead ofhis usual motorcycle helmet. As for the mask itself, 8 crimson red LED lightslined its black visor- making Mr Voodoo appear as a nightmarish spider ofsorts. Where the nose would’ve been was replaced with a black plate- lined withred LED strips- which continued down the mask. Below the mouth sat a circularmodule- lined with more LED’s- like a hot stove. It was damn intimidating-almost creepy- as if staring into the maw of a hellish cyborg monster. 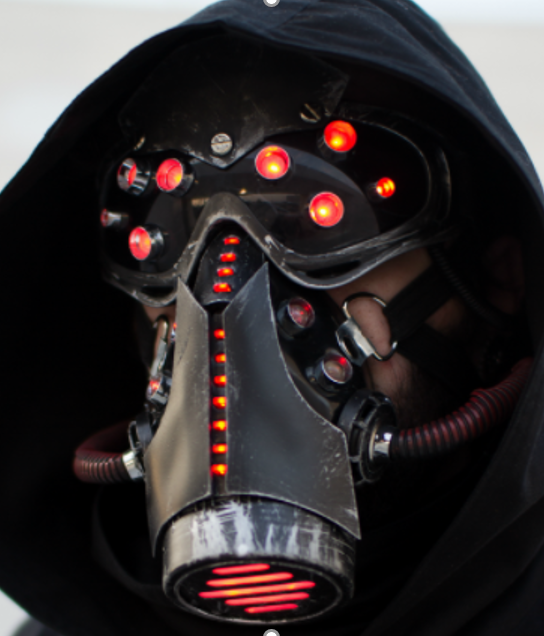 See what I mean?

Mr Voodoo also opted for a pair of black leather biker jeans- in order to conceal his obvious machine legs- accompanied by a pair of white trainers. Voodoo hated their style. And their overall comfortability. But it needed to be done. Over the mask was a large white hoodie- plain and unbranded- in order to receive minimal attention, comments, or looks. Voodoo even had a voice changer module underneath the mask; one which deepened his voice massively, like what criminals used in interviews. It certainly made it difficult to identify him.

Natasha had no need for a mask or helmet. She wore a sleek black jacket- one which went down to her knees- and one which could easily be removed in the event of a chase. Her eyes were covered by its capacious, ominous hood- like a shroud of darkness. Underneath the jacket was a flexible racing jumpsuit- also fully black- accompanied by dark, thin gloves. To complete the veil of darkness, she wore black jeans- which weren’t too tight- in order to run quickly.

Mr Voodoo took a seat at the bar. He was just in earshot of Hugo and Lillian- who sat a few chairs down. Natasha leaned on a pool table- quietly and thoroughly scanning the bar for exits, potential threats, and improvised weapons. Who knew what could happen? With a place like Japantown, you’re bound to run into Yakuza. And considering Nat and Voodoo had recently stolen a lot of their precious rides, they were in dangerous territory- like a pool full of hungry sharks. But, provided they didn’t bleed, the sharks wouldn’t bite. A bartender soon came up to Mr Voodoo.

“Can I get you anything?“, she asked in an oddly professional, clean accent.

“Nah, I’m okay, I’m just waitin’ for somebody.“, Mr Voodoo responded- his voice unrecognisable underneath a deep, digital voice changer. “How long they been here?“. Voodoo pointed to Hugo and Lillian- who were talking away happily- ignorant to their audience.

“Uh, about two hours... came in here looking all happy- as if they’d just been married or somethin’. Maybe they did just get married... who knows?“, the bartender mused. Voodoo chuckled briefly.

Meanwhile, Natasha had started a friendly game of pool with a man dressed in a clean, sharp pinstriped coat- crimson in colour- accompanied by long burgundy dress pants with matching crimson cuffs. He had introduced himself as Alexander to Natasha- before politely inviting her for a game of pool. She obliged, of course, not out of friendly mannerism, but to blend in with the surroundings. Nat wasn’t particularly focused on the game- as she kept a watchful eye on her targets. Mr Voodoo, meanwhile, was attentively listening in on their conversation- whilst appearing to observe the bar’s features and furniture- such as the mahogany floorboards, or the grand emerald dragon hanging from the ceiling. Hugo’s face appeared calm and cheery- despite the numerous rivals he now had on his back, as if he were totally ignorant to the fact he was being hunted. It appeared he wanted to be caught. Lillian’s voice, however, now appeared to carry the worry which Hugo’s was missing. She turned frantic and anxious in her speech. Mr Voodoo listened in attentively.

“Look, they’re gonna come after you! You can’t just sabotage a job and expect them to leave you alone!“, Lillian rushed- attempting to persuade Hugo to take extra precautions. Even being out in public was a danger. The Ghosty Boys have technological eyes and ears everywhere, all thanks to Krypto. He, too, was attentively listening to their conversation from the cameras- feet still high on the dash- and halfway through his second Juice vial.

“C’mon, we gotta go, Hugo. For your safety and mine.“, Lillian continued, slowing down, voice becoming far more concerned. Stern, even. Hugo looked down at the floor glumly, then up at Lillian. He then nodded to the side- indicating towards the door- like music to Mr Voodoo’s ears. Or eyes, in this case. The two stood up and began leaving.

“They’re on the move, you two! Stick close by, but not too close. Stay within shootin’ distance!“, Krypto ordered from his command centre of the Dodge Conqueror. He remained tucked away in the reclusive alley- concealing himself inconspicuously.

“I’ll be ready to move when you need me!“, Krypto continued- eager to get in on some action- despite the obvious... ethical issues behind the job; however, Krypto had come to terms with it all. The fact was, sometimes, you had to get blood on your hands to get shit done. Especially in Twilight City.

Mr Voodoo and Natasha began moving. They left the bar by the time Lillian and Hugo were halfway up the street. They then disappeared after taking a left. Their pursuers followed briskly.

“They’re still on main streets, so don’t grab Hugo yet!“, Krypto explained. Natasha and Voodoo waited at the corner, taking a peek round. Hugo and Lillian appeared to be ever-more observant of their surroundings. Their faces looked anxious and worried. Did they know they were being followed? They got to around halfway up the street before crossing over. Voodoo and Natasha did the same as they jogged past impatient traffic.

They continued to shadow Lillian and Hugo from a good distance. Krypto had put his car on auto-drive to circle the surrounding area- in case he was called upon. Voodoo and Natasha had taken to the rooftops- surveying their pray from above. Hugo and LILLIAN soon cornered themselves by turning into a quiet alleyway. Perfect for snatching them up like hawks.

“Grab Hugo now whilst they’re in the alley!“, Krypto exclaimed. He parked his car up and began rushing to their location frantically.

Mr Voodoo dropped in front of the two. Natasha swooped down from behind. Hugo and Lillian reacted immediately.

“Come quietly, Hugo. Don’t make this difficult.“, Mr Voodoo ordered. Hugo stared him down with vengeful eyes. He put his hands up. Lillian stood her ground, too, back-to-back with Hugo, facing Natasha. Each adversary silently begging their opponent to hit first. Krypto continued rushing towards the scene.

Hugo ran out of patience. He ran at Voodoo with raised fists. Voodoo attempted to kick- servos whirring as the leg raised and extended. Hugo caught it and pushed Voodoo back. His opponent stumbled slightly. Hugo then threw punches. Voodoo blocked each one perfectly. Hugo continued attacking relentlessly. Voodoo dodged and weaved- arms clashing with Hugo’s. He then swept Hugo’s leg with a masterful spin. Hugo fell on the floor. Lying on his back, Voodoo placed a foot on his chest.

Lillian and Natasha began fighting. Natasha went at Lillian with a flurry of kicks- aiming for Lillian’s head. She ducked under most of them. Taking a jab at Natasha’s side, it connected. Those steel fists could do some damage. Natasha stepped back, wincing with pain. Lillian then lunged at her. She picked her adversary up. Attempting to throw her down on the floor, or against the wall. Natasha wrapped her legs around Lillian’s neck- tightening her grip like a python. Lillian threw her on a table. Trying to shake her opponent off. Nothing could shake her. Natasha was relentless.

Voodoo picked Hugo up by the neck. Part of him wanted to snap it. To end it all here. But that wouldn’t be possible. Not there. Hugo’s body squirmed. Voodoo threw him back against the wall. Leaving a crater where Hugo hit it, he collapsed to the floor. Struggling for breath. Body aching. Bones screaming in pain. Hugo clutched his chest. Voodoo lifted him up onto his knees. Driving an elbow into Hugo’s nose, it broke underneath the force. He was knocked unconscious as blood trickled from his face.

Natasha had managed to get Lillian into a choke hold with her legs. She began to struggle for breath, too. Body squirming and writhing wildly. Blood flow restricted from the brain. Her body finally fell still. Unconscious as well. Natasha let go of her hold.

Krypto came rushing around the corner, almost slipping over. He paused for a moment and observed the scene. A truck backed up into the alleyway behind him; one he had hacked.

“Get ’em in here!“, he ordered, opening the doors. Natasha and Voodoo picked up the unconscious bodies of their rivals and placed them inside rashly. Krypto then shut the door and signalled his Dodge Conqueror to come park up. Natasha and Voodoo began driving back to the bunker.

They had played the hand well. But there was blood on the table.

And more was to come.