Both parties had their guns aimed at each other’s heads. 5 soldiers at Krypto’s, 5 at Natasha’s, and 5 at Mr Voodoo’s. Natasha had swapped her Stopper disks out for two M-15AG Lexington’s- automatic 9mm machines. Those things spit lead faster than Cobras spit venom.

“STAND DOWN!“, the soldier in the middle shouted. His voice sounded digital- almost robotic, but still vaguely human. He was clearly a commander of sorts- given the red LED pauldron upon his left shoulder. Apart from that, he was identical to the others. The forearms were clad with armour plates with a bone-like structure- black and grey in colouring. Shoulders were protected by rounded pauldrons, smooth but bulletproof. A tactical vest spanned around the soldier’s upper torso- with the word ‘POLICE’ scratched out so it was barely readable. The legs were clad in the same heavy tactical gear. Two lights protruded from the shoulder joints- built into the tactical armour. A domed helmet- coloured in opaque gold, as if touched by King Midas- covered the soldier’s face and head. 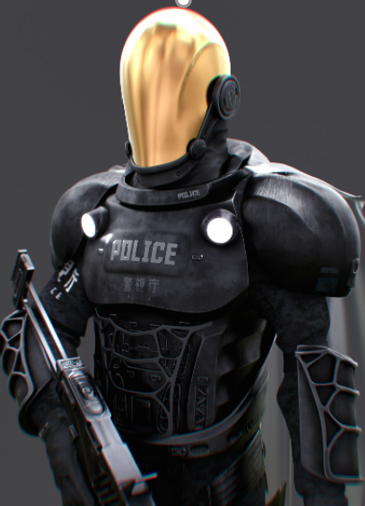 The three began to recognise them as Rogues. Elite mercenaries- best of the best- each with either policing or military expertise. Trust me, the Rogues are people you do not wanna tussle with. These guys will put a bullet between your eyes from 3 miles away before you can even notice the little red dot on your forehead. The Ghosty Boys were certainly outmatched.

“Final warning, you three! Stand down, or we’ll be forced to shoot!“, the commander continued.

“That’s not what we agreed in the contract!“, Hugo protested. Natasha looked down at him, then at the Rogues. Hugo had hired them. Probably using his cut from the job which tore their family apart. But she didn’t care about that. She was more bewildered that Hugo wanted to keep them alive. Why? What purpose did it serve? They were wanted fugitives. Most goons in TC would pay fortunes for their heads.

The standoff fell to a deadlocked silence. Hugo and Lillian kept their eyes down- with Hugo looking at her occasionally as a means of reassuring the both of them. Voodoo kept his AK aimed at the commander’s head. The guy talked too much. Voodoo didn’t like that. Not one bit. Krypto had his Desert Eagle aimed at another random soldier. Natasha did the same with her two pistols. The soldiers hadn’t budged. Hadn’t broken form. They stood perfectly still- their aim perfectly precise- and their danger perfectly real. Like machines.

The standoff continued. Moment after moment. Agonizing everyone involved. Until Mr Voodoo broke the silence.

“Let’s talk this out! Lower your guns!“, he called out to the soldiers. Not one of them moved. Refusing the false commander’s order.

“They only listen to my commands, Voodoo. Lower your weapons first!“, the commander retorted. Mr Voodoo obliged. Krypto and Natasha seemed worried. Panicked, even. They soon came to terms with it. Lowering their guns simultaneously. The commander then raised a hand and waved a gesture. The unit lowered their weapons simultaneously. Like one.

“Just to be clear, we have snipers over-watching this position. You try anything funny, and you’re all dead.“, the commander warned sternly. He took his job very seriously. As if his own life depended on it.

“Hand the hostages over.“, the commander demanded. Voodoo chuckled underneath the helmet.

“Shoulda asked that before you put the guns down! We’ve got... personal business to deal with. So why don’t-”

“I don’t give two fucks about your business. Hand them over!“, the commander demanded again- this time with more force. His soldiers appeared to twitch at the threat- responding instantly to any stimulus. Their nerves were pure cast iron, and their senses dog-like, with a fighter pilot’s reaction times.

“Or what?“, Krypto asked- as if pushing the commander’s limits.

“Or we get the snipers to fire.”

“Bullshit! You ain’t got snipers! Where the fuck they gonna be, huh? Sittin’ in the canyon?“, Krypto mocked confidently. The kid was thinking with his head, not his heart. Unlike the others.

“Get ’em to shoot me!“, Krypto demanded enthusiastically. “C’mon, do it!“. The commander grimaced underneath his helmet. The kid had outsmarted him. Krypto laughed out triumphantly.

“See, there ain’t no snipers! Quit lyin’, choom!“, the kid continued to mock. The commander furled his fingers. Damn kid was smart. But annoying. So annoying that the commander wanted to hurl him off the mountain. The soldier refused to admit his lie, however. Refusing to swallow his pride, he continued to make demands.

“We still need you to hand the hostages over, Voodoo.“, the commander pressed- taking on a less stern tone. But it was still forceful.

“What do we get in return?“, Voodoo asked. He wasn’t gonna hand them over without a quick quid pro quo. That was just stupid.

“You leave here scot-free”, the commander explained passive-aggressively. “There’s a high price on your heads, from the people that actually believe you exist. Wouldn’t mind cashin’ in on it myself.”

“I don’t think you understand, choom. This guy’s dyin’. Her, however? You can take her.“, Voodoo continued argumentatively- pointing to Hugo and Lillian with his gun barrel, respectively. The commander paused for a moment. In deep thought. The job was to save both of them, not just one. But with no casualties. How the fuck was that possible? Besides, that’s not how the Rogues operate. It’s just get the job done. Easy in, easy out. Get paid. Repeat. The commander finally answered.

“Fine. Say your goodbyes, I suppose. Then we’ll take her.“, the commander stated- denying any attempts at protest, if, but’s, and maybe’s. He certainly understood negotiations when lives were on the line.

Mr Voodoo nodded towards Krypto. He understood and uncuffed the two.

Hugo knelt down beside his defeated companion. He placed his arms around her slowly. She did the same. Their tears flowed briskly, and in legions.

“I’m... sorry, Lil. I... truly am. I... just... wanted to fulfil that... promise.“, Hugo began- his voice faltering upon almost every word- as if his Adam’s Apple were bleeding to death slowly. His breathing was heavy and slow. Broken and weak. Like an inconsistent breeze. Lillian was weeping her synthetic heart out upon his shoulder.

“Don’t be sorry. You were just... trying... to protect me. That’s all... you could ever do. That’s all... I could ask of you.“, she responded in an equally dying voice. Her misery and sorrow had slain her happiness. For the final time. Without Hugo, she would have... nothing. No friends. No family. Just an empty shell of a life. Left wandering a desolate city. Like a ghost.

“I’ve got... something to... give you.“, Hugo admitted- producing a small box from his jacket pocket. I can tell you this much; it’s not a wedding ring. “A little keepsake. To remember me by. Open it... when I’m gone.“. Hugo and Lillian fell silent. All of their tears slowly ran dry. They clutched each other tightly.

“I’ll love you forever.“, Lillian responded. She stood up slowly and began trudging towards the Rogues. She took one last glance at Hugo- smiling at him for the last time. They both knew one thing: they’d see each other again. One day. One place. One time. They just didn’t know when.

The Rogues then broke formation and embarked their helicopters- along with Lillian. Soon, the fluttering of rotors had faded.