Anushri_321 would love your feedback! Got a few minutes to write a review?
Write a Review

She was very pretty.

Then I asked her ‘What are you doing in this creepy and dark jungle?’

She said ‘I-I was lost here with my friends... B-But, what are you? H-How did you not get any scratches while fighting with that monster? You k-know magic? Are you a wizard? What are you-’

Ahhh... She asks so many questions at one time.

She was hesitating but nodded. We walked for a few minutes. But after that, Katie hurt her leg by kicking on a stone, because she was walking for a long time. And was frustrated and kicked the stone.

It was so embarrassing. I kicked that stone and hurt my leg. at first Eric chuckled and then he asked ‘I knew that you were angry, but you shouldn’t have done that.’

I am hurt and he didn’t even asked if I was ok..

I was angry about that. I said ‘Uhh! You are so irritating. I am hurt but you are laughing. If you don’t stop now, I AM GONNA KILL YOU!! SHUT UP!.’ Eric stopped and then he did something that shocked me. He put his arm around my waist and held me in bridal style. His touch sent unusual sparks all over my body.

I am hating my body right now.

‘Hey! I can walk you know! And I am heavy! You can’t hold me for long! PUT. ME . DOWN!’ I shouted. Although I was just 36 kg, I just said that. But he doesn’t seem to have problem in holding me. My cheeks were burning. His blue sparkling eyes met mine and he smiled. ‘Heavy, you? Hahahaha! Never heard such a joke. You are light as a feather. And don’t you worry I won’t drop you.’

I know I have just met you and I have seen you using magic but, my heart wants to trust you completely. I don’t know what creature are you but, I feel very attracted to you. Your blue and shining eyes feels like you are going to keep me safe. Just a normal touch from you and my whole body burns. I remembered my mother said ′Sometimes, your true love is right in front of you and is feeling the same you are. Sometimes you feel the true love but just you do not want to accept it. Some people think it as a something that weakens you and makes you emotionally weak. You trust the person blindly. We are willing to take someone’s and give our lives. But actually the love conquers your heart at last. It is truth that sometimes you can get emotionally weak but those are just some tests that heavens are taking. They want to test our bonding with the soulmate they have chosen for us. DESTINY decides love. And no matter what destiny can never be changed. Even the most powerful man in the whole universe cannot change destiny. We are allowed to love only the one we are tied to.′

I didn’t realized that Eric was calling me. ‘Katie! Katie! Are you ok?! Please don’t scare me!’ Immediately shook my head and looked at Eric, his eyes were showing concern and if I looked carefully, his eyes were a bit watery. HE IS CRYING! I immediately said ‘Oh! Don’t cry! Why the hell are you crying!?’

For a second, I thought that he himself was shocked that he was crying. Then he regained himself and said ‘Anyways... We are here.’ I looked at our surroundings. I noticed a big and old temple. It looked really old and it’s wall were still shining as they were made of gold. The temple was big and scary looking.

Please don’t tell me that Eric has fooled me and has kidnapped me... No! No! No... Don’t think negative Katie.

He smiled at me. That smile send butterflies in my stomach. I secretly smirked.

‘This is place where I wanted to come. Maybe you can help me in this mission. Will you?’

Eric man, now you are going down.

I held his shoulders, and bit his cheeks.. His cheeks were soft and white. They were like cotton candy. I bit them harder, but he didn’t flinch. I them punched him in back. He still didn’t flinch.

Who is this guy?

Then I had an idea. I stop struggling. I relaxed in his arms. He smirked and I was irritated by his devil-like smirk. I said ‘Sorry..’

He looked at me ‘What fo-’ I didn’t let him finish. I kissed him on his lips. His eyes widened at first. His lips were soft and warm. It spread electricity all over my body. I felt butterflies in my stomach again. His lips were sweet. I had grown totally hot. Then I feel him getting relaxed. I IGNORED THE FEELING! And got down, I don’t know how. But after my legs hit the ground. I break the kiss. I turned around with my back towards him. I was all hot and blushing furiously. I can still feel his soft and warm lip’s sensation on my lips. I can feel his shocked. God, this was my first kiss. I thought it to be beautiful but, this one was like heaven. Argg!.. Stop it, Katie.

I cleared my throat and turned around with my attitude. I saw his face red with embarrassment. ‘See?...I told you.’ His eyes met mine. They were hypnotizing. ‘Umm.. Ya...I-I am sorry.’

I bit my lower lip. His gaze falls on my lips.

I felt like he was undressing with his dark blue eyes. I then looked around me. We were inside the temple. It was made of gold inside also. There were several torches on the walls, with fire on them. There were so many doors inside. There were huge chandeliers on the top made of glass. There were two silver swords in one corner. I shuddered. They looked deadly. You can imagine it was like this.. 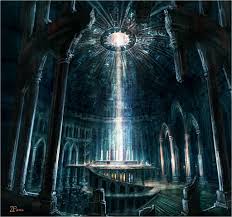