Anxiety would love your feedback! Got a few minutes to write a review?
Write a Review

4. We're nothing more than Friends

After we finally left the house we got into Reid’s car as him and Alex bickered over where to go to eat, I slumped down, rubbing my temples in annoyance.

“How about we just go to the mall? We can eat something at the food court.” I suggested, they both looked at each other and shrugged.

After about a half hour of screaming lyrics to early 2000s songs, Reid pulled into a parking spot and we got out of the truck, making our way into the mall.

“And if you look to your left, you’ll see basic-ass white girls in their natural habitat,” Reid said in his Steve Irwin impression, I looked over to the left and saw it was a Starbucks, I couldn’t help but laugh even though I was one of those basic-ass girls.

“Alright, this table is good, we’ll meet back here.”

I made my way towards Panera, I paid for my order and turned to go back to our table.

I was sipping on the strawberry banana smoothie I had ordered, but I, being the graceful swan that I am, bumped into someone, the smoothie now decorating my t-shirt.

“Oh my god, I’m so sorry.” my victim apologized as I pathetically dabbed at the pink liquid on my shirt.

“No, no, It was my fault, I wasn’t looking where I was going-” I said, I looked up completely forgetting what I was saying as my eyes met beautiful green ones.

He smiled at me softly, “My name is Tristan...you can call me Tris...” he seemed timid, not being able to look me in the eyes for too long, I smiled, he was cute.

“I’m so sorry, here, take my flannel.” He untied it from his waist and handed it to me.

“Please, I feel really bad.” I sighed and nodded,

I changed in the bathroom, cleaning myself up before buttoning the shirt and tying it half way as a cropped top.

I walked out of the bathroom and was met with 3 boys arguing, “Proud of you T, you finally found a way to get girls to take their clothes off.” one of them said, a few tattoos peaking over the collar of his shirt.

I cleared my throat, making them finally notice my presence, Tristan slapping the back of the tattooed one’s head.

“You must be Adelyn, I’m Kayden and this is-” he was cut off by his friend.

“I’m Christopher but you can call me Chris.” he greeted, giving a single wave.

“Nice to meet you guys, I should head back to my table, see you guys around.” 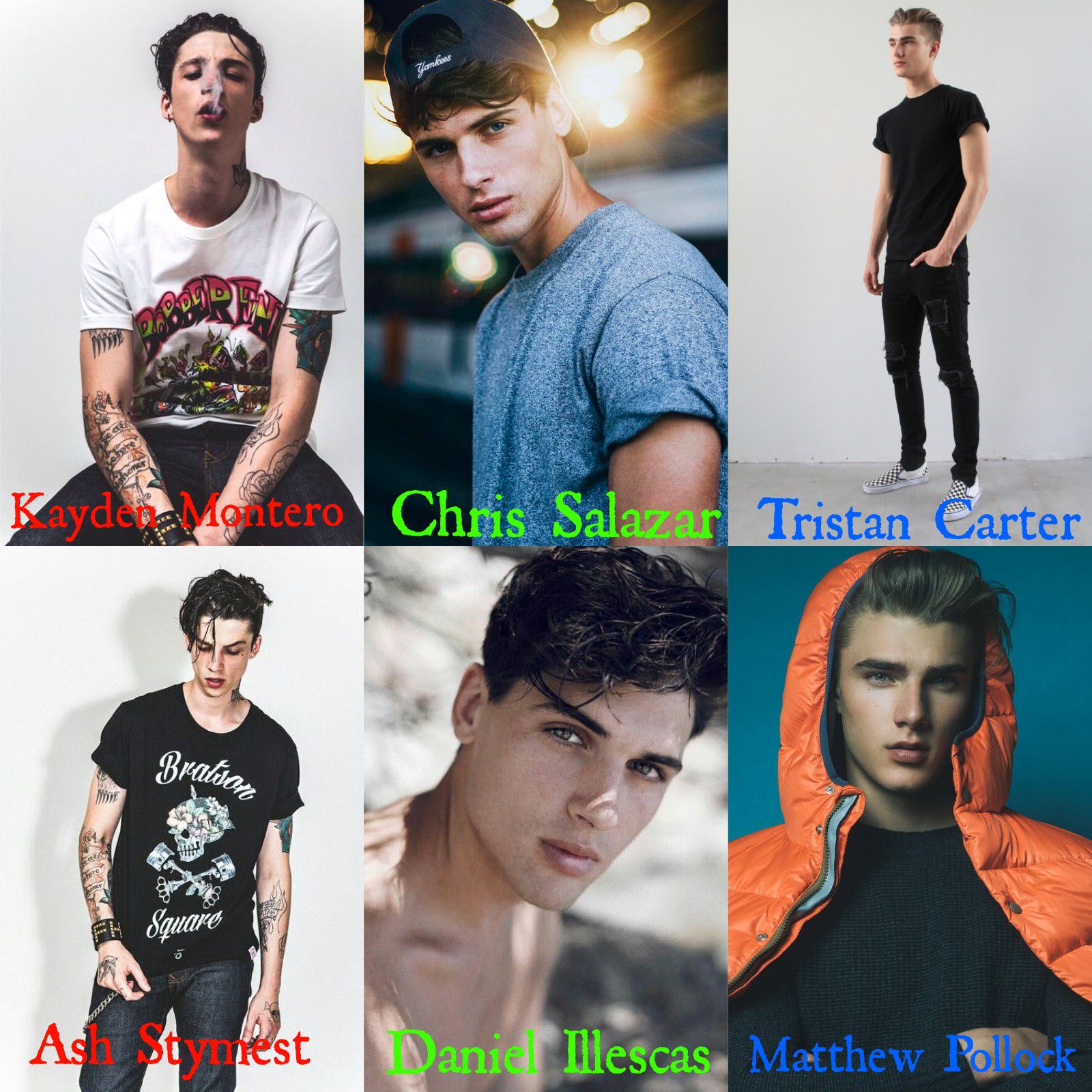 I walked past them, releasing a breath I didn’t know I was holding in, I reached the table-Alex and Reid were already eating.

“What took you so long?” my brother asked,

“And who’s shirt is that?” Reid asked

“I bumped into this guy and spilled my smoothie on myself, he felt really bad so he gave me his flannel to change into.”
Reid nodded, “Did you get his name?”
“Tristan, I didn’t get his last name but he was with two other guys, Chris and Kayden.” Reid frowned, his jaw clenched at the mention of their names.
“Hey, Adelyn.” Speak of the devil,
I turned to look at Kayden.
“You forgot your food, T was too embarrassed to face you again so here I am.” He chuckled, I thanked him, taking the bag.
“See you around,” he winked, smirking at Reid before walking away.
“God I hate that guy,” Reid grumbled as he stood up, throwing his trash away.
“Who is he?” Alex asked once Reid came back.
“The school fuckboy, him and his friends are bad news Adelyn. I wouldn’t make friends with them if I were you.”
And that was that no more was said about the guys, I decided to shrug it off and continue with my day.
-
-
-
“What about this?” Alex asked, showing me the ugliest sweater I’d ever seen.
“It’s the first day of school, I’m not going to a convent.” I frowned as I tugged at the itchy material of the dark blue turtle neck sweater.
My brother mumbled curses as he basically threw the sweater back on a rack.
“I can pick my own clothes Alex, I’m going to Forever 21, I’ll meet you guys by the Ice cream stand in an hour.
He nodded and I left Hollister, heading towards Forever 21, I looked through the racks of jeans looking for my size.
“Maybe you should try on a few, see how you like them.” A familiar voice spoke, I smiled slightly as I turned to look at Chris.
“You guys following me?” I asked, morning towards Kayden and Tristan who were messing around with the women’s sun hats.
“Nope, you just have great taste.” He chuckled, I smiled, shaking my head as I turned my attention back to the jeans.
“So you go to North Hill?” He asked I shook my head.
“No not yet, I just moved here and tomorrow is my first day.” I took a few off the rack and moved to the shorts.
“That’s cool, where did you move here from?”
“Illinois,”
“Damn that’s a change, how are you liking Portland?”
“The views are amazing. ” I smiled.
“I bet my view is better,” I turned to look at Kayden who had shamelessly been staring at the fit of my skinny jeans.
“Don’t be disgusting you animal,” Tristan punched Kayden’s side, only to receive a slap from Kayden.
“You guys are really nice to each other.” I laughed.
They all exchanged looks of defeat, Kayden winked at Chris, who nodded at Tristan, Tristan shook his head but Chris and Kayden ignored him.
“So, Adelyn here is starting school tomorrow, she moved here from Illinois.
why don’t we show her around?” Chris suggested.
“I can’t, my brother and Reid are probably waiting for me.”
“Aw, your boyfriend gonna get jealous?” Kayden asked, making a pouty face.
“We’re nothing more than friends,” I stated, though it felt wrong to say it.
“I don’t believe you but come on, who better to show you around than some locals?” Chris asked.

“She said no,” I jumped slightly as Reid’s voice interrupted Chris, I looked over at my brother who simply shrugged, just as confused as I was.

“Adelyn, why don’t you and Alex head to the ice cream place, I need to talk to Kayden for a second.”

I decided not to argue and paid for my clothes before I followed Alex out of the store,

“What is he saying to them? why was he so mad?” I had hundreds of questions, it was now apparent to me that Reid and Kayden had some sort of problem with each other.

“I don’t know, it seemed like a personal problem...now what flavor?” my brother asked as we stood in front of the bright green counter with pink polka dots.

Eventually, Reid joined us again, avoiding any questions I had about Kayden or about what problems he had with the guys.

“I just don’t understand what made you so mad, what did he do to yo-”

“Enough Adelyn, okay? I don’t want to talk about it.” he snapped at me, frustration laced his words.

I decided to keep my mouth shut the rest of the way home, Reid and Alex continued to converse awkwardly trying to fill in the silence. As soon as the car was parked I went inside and to my room.

I checked my phone and saw I had a missing call from Jade, I clicked on her face and belly-flopped onto my bed as the phone rang, eventually she picked up.

“Hey, Jade!” I smiled, happy to see my best friend.

“Hey girly, how you settling in?”
“Well, I’ve only been here a day and already managed to embarrass myself in front of a really cute guy so... nothing new.” I laughed, Jade, joining in.
“Wow, you’re still as awkward as ever,” she joked, I shook my head, rolling my eyes.
“How are Nate and Eli?”
“They’re good, Eli is loving living in your old house, he doesn’t have to deal with his brothers,”
“My mom hasn’t come back yet?”
She shook her head, “I’m sure she won’t be much longer.”
“You’re probably right,”
I heard the sound of her doorbell.
“That’s probably Nate and Eli now, we were going to the movies.” She took me with her, for a few seconds I only saw her purple hair, eventually, two other voices were heard and their faces appeared, Jade in the middle as if she were taking a selfie.
“Hey, guys!”
“Hey Adelyn, How’s Portland treating you?” Nate asked.
“Make any new friends?” Eli asked.
“It’s beautiful and sadly no, but I’m starting school tomorrow.” I was nervous to start school already a quarter into the first semester.
“They’ll love you, don’t worry Addy,” Jade reassured me.
I nodded, “Okay, well I’ll let you guys get to your movie. Love you guys.”
We said our goodbyes and I hung up, I groaned into my pillow.
I turned on my back and stared at the ceiling, eventually falling asleep.
*
*
I woke up when my phone dinged. I grabbed it and opened a text from an unknown number.
‘You hate me now?’ -R 9:56 pm
It was from Reid, I typed a reply.
‘No, I don’t’- A 9:57 pm
‘Good, cause I’m outside with a picnic basket, like in that dumb movie about high school you love so much,’- R 9:57 pm
I smiled as I read the text,
‘You mean High School Musical?’
’Yeah, with Roy and Daniella,”
I laughed as I got up, walking outside to my balcony.
“It’s Troy and Gabriella,” I said as I looked down at Reid.
“Whatever, you gonna let me feed you chocolate covered strawberries or what?”
I shook my head but smiled as he threw me a rope that was attached to the basket, I pulled it up and then he climbed the tree until he landed on the balcony, making no sound whatsoever.
-
-
-
“I’m sorry for snapping at you, those dudes just drive me crazy.” He mumbled, reaching for another cookie.
“Who are they anyway?” I asked he finished his cookie before he continued.
“Tristan Carter is a senior, he’s a complete genius, 4.2 GPA and our class valedictorian for when we graduate.”
I couldn’t help but let out a “wow.” As he explained to me all of Tristan’s achievements.
“Christopher Salazar, 3 sport athlete, Soccer, Basketball, and Football. Full ride to whatever’s Uni he wants on an athlete’s scholarship as soon as he graduates.”
“And Kayden Montero, barely passing probably, heard he’s joining the marines but there’s nothing too special about him, he’s just a total fuckboy.” I frowned slightly as he got to Kayden, it seemed like there was more to him than just the stereotypical ‘bad boy’ every school has.
I nodded though, not wanting to upset him again.
“They’re all the same Adelyn, they’re no good.”
Somehow I found that hard to believe but then again, I always want to fix people that are broken.

Song for this chapter: Friends by Marshmello ft. Anne-Marie