Crimson Petals would love your feedback! Got a few minutes to write a review?
Write a Review

They were hungry...but they had already ate a feast of flesh.

The beasts sat in the shadows....their thoughts not far from the darkness that surrounded them. The sharp cutting smell of pine and rotted mulch offended and agitated them as much as the healthy, willowy canopy all around them seemed to irritate them. Branches and thin sticks that trembled in the soft cool wind.

The slight almost musical twinkle of the pine needles tumbling to the forest floor, seemed to disturb the hidden hunters making them even more jumpy and angry then they were normally.

As though they were unfamiliar with such a thing as falling leaves or healthy air, their bodies twitched and saliva gathered at the edges of their mouths as they became more hot and bothered by the passing hour.

But though clearly angered by their surroundings the beasts sat as still as sentinels in the night. Poised on the balls of their clawed feet.

And although the pungent scent of horse intestines and blood wafted up from the shapeless pile of shattered bones and horsey hamburger sitting before them, nothing seemed to please the beasts and they only grew more and more agitated as the moments passed by.

The gummy, watery, smacks of teeth and flesh meeting and grinding filled the night air....but this was not what they needed to do and the beasts knew it.

Even though the equine blood and feces were good as they ran down their gullets....the beasts needed to find their target.

The hunters had searched for their prey for many many moons now. They had smelled its blood in the air, followed it to this forest, but now the beasts were uncertain what to do to capture their target.

But there were too many Shape Changers for them to fight all alone... and that was the only thing that had kept the target out of their grasp for so long.

One of the beasts had already tasted one of the Shape Changers blood only a few nights ago. It had been angry blood. Delicious blood. Strong blood.

And all around the beasts the smell of prey lurked....the smell of Shape Changers lingered. A mountain of scents that made the deadly hunters crave to shred and rend and tear everything in their paths until they had gorged themselves on the carnage.....but the beasts knew in a primitive part of their minds that this would bring them trouble.

Their Master told them to seek. Their Master had bade them to hunt....and kill. To capture!

And there! Suddenly standing in the window was their target!

With eyes blind, because all of their kind stalked with senses other than sight, they simply sensed him moving in the cave. Sensed their targets energy...like a roaring flame...or sunlight. Their target glowed to them, his power called to them. There he was.

With a chittering, chocked bark, the beasts lost what little train of thought they had managed to sustain. They raced each other towards the figure standing in the glass.

Their Master had sent them to find.....and now they would capture.

A sharp pinch of apprehension shot down Brandon’s spine. He felt dread rising, as he placed a gloved hand to the window pane and peered into the unfamiliar darkness outside of the Shifters home. Something shot across the shadowed fields beyond the window. Brandon swallowed in shock, but he didn’t move.

He thought to himself in an attempt to stave off the darker....less unpleasant thoughts. The thoughts that told him that something terrible was about to transpire.

Brandon’s eyes strained to make out the large shape of what was approaching, but in the cloudy moonlight there was nothing for his eyes to focus on. Then suddenly...for a few seconds the clouds shifted and a dull white beams of light blanketed the fields just in front of the house.

And instantly Brandon realized that the large shadow was in fact two, long bodies moving towards him. Eyes...teeth. And outlines far too large to be men...and too misshapen to be any animals.

It was something else....something that ate men and devoured everything else.

Brandon thought, but it was already too late and he knew it. The moonlight faded, but the Shadows stalked closer, and slammed right into the side of the house.

The glass shattered and cut into his face. Long claws attached to abnormally long arms and fingers just barely missed him as Brandon jumped back, tripped over the coffee table and slammed into the carpet on the other side of the wood. Chattering, broken yelps and cackles....and snarls clawed into the world, as the long lean arms chopped and slammed into the walls beside the window....as the beasts outside fought not only themselves, but geometry as they tried to force their way into the candle lit room. A cold spike of shock shot deep into Brandon’s soul. Paralyzing him for a few precious seconds until he mentally slapped himself into movement.

He screamed at himself as an oily unpleasant scent washed over him. The smell of excrement and urine. A scent that haunted Brandon’s senses.

They’re goona will kill everyone in this house...But if I leave, maybe they’ll follow me!

I’ve got to lead them away from here!

Not even taking the time to worry about the blood gushing down his cheek, or the glass shattering loudly behind him, Brandon scrambled slightly as he rolled onto his stomach and shot onto his feet. Barely breathing, he sprinted out of the room, turned right, and slammed right into a group of big bodies. But the chest that he found himself rammed against just then was attached to a pair of bright blue eyes. Brandon only had a second to glance around the hall, and catch a glimpse of Ezekiel, Walter and Lander before the urgency was clawing at him again to run.

To keep the beasts from attacking the Shifters somehow. To lead them away.

And yet the three Shifters blocked the hall, preventing Brandon from shoving past them and each of them were staring down at him with expressions of varying levels of worry on their faces.

Brandon ignored them all. He could barely think past the numb fear in his heart. He brought his hands up and shoved on Ezekiels chest. Trying to manhandle him out of his way, but it was like moving a wall and instead of moving back Ezekiel grabbed his wrists and stepped closer.

“Hey! What happened? We heard you screaming......How did you cut yourself!? ” Ezekiel rumbled against him as he grabbed Brandon’s arms and held him back so that he could look at his face.

His bright blue eyes locked onto the bloody gashes in Brandon’s face, but before he could say another word the sound of whooping howls and snarls crawled out of the doorway behind them. All of three of the brothers snapped to attention, like dogs on alert.

“Let me go!” Brandon nearly shouted a second later, as he tried to break away from Ezekiels hold. “They’re gonna come through the window!”

But Ezekiel wasn’t even looking at him anymore. There was thrum of deadly energy as each of the brother cast enraged, slit eyes towards the sounds of attack and intruders. But none of the energy took his breath like Ezekiels.

Like a slap of hot water it expanded around him too dense, to angry, to blood thirsty.

“Take him!” He growled, like gravel was in his throat.

With a sharp hiss he pushed Brandon into his eldest brother’s arms and shot down the hall and towards the monsters that Brandon had just ran from. Walters left arm locked around Brandon’s shoulders as he turned him around, completely unfazed by Brandon’s struggles to pull away from him. And without another word Ezekiel and Lander raced down the hall, their faces and teeth dissolving into something a little less handsome and a little more beastly as they disappeared around the corner.

For a second Brandon hesitated. Everything in his body told him to push the wall of meat and stone that was Walter, out of his way and get as far away from the Leopards lands as his feet could carry him. But a part of him wanted to follow the brothers, help them....protect them.

And in that one moment of hesitation the chance to disappear out into the night was taken away from him.

“Well!? Don’t just stand there. Come on!” Walter growled as he snatched Brandon by the back of his neck and nearly yanked him down the hall beside him. Hopelessly unable to break his hold Brandon stumbled back down the hall, listening to the growing sounds of battle pouring out of the day room ahead of them.

Hisses, snarls, whooping cackling laughter, shattering furniture.....and roaring. Once Walter reached the doorway he released Brandon and with a snarl unlike anything Brandon could remember. Walters’s large frame rushed into the room, leaving Brandon in the hall. Torn between watching...and running.

Brandon knew that the longer that he stayed there the more he endangered lives. The way was clear now. The brothers would be more then busy fighting the monsters that had come for him. With no one watching him Brandon could usurp Mantilo’s Lock down, sneak away and be miles out of the forest before the last Shifter in that house was slaughtered......but.....but he just couldn’t do it.

He didn’t know why....but he felt that he had to help.

So with a mouth full of curses, Brandon forced himself to sprint into the room and as he came in on the heels of the Guardians his first instinct was to look for Ezekiel.

But seeing the monsters in the full warm candle light of the day room is what rooted him to the spot.

Two snarling, six foot whooping, growling, giants stood in the now decimated left side of dayroom opposite Ezekiel and Lander, Walter and the door way. The left side of room where the monsters had clawed their way in; now held a ripped up arm chair and two smashed tables. Various other broken things litter the space, pieces that the beasts had seemed to destroy out of pure homicidal rage. And this time Brandon saw them with perfect clarity. As he had never hoped to see them again....Ghouls. Beasts.

Oily skinned beasts, with thick flesh the color of dead leaves, long lean limbs with talons and heads shaped like equine. All these seemingly unnatural appendages were perfectly fused with the bodies of men, with slightly elongated snouts and thin waists and defined muscles. Pitch black, pupil-less eyes glared at the Shifters in the room, weeping a clear mucus, and leathery long oval ears laid flat against the sides of their misshapen skulls began twitching back and forth as the intruders stood still.

Growling aggressively and crouched slightly forward on the balls of their unnaturally long and dirty feet. Their lips drew back over jaws filled with needle sharp teeth, fangs dripping with saliva as dark and vile as their soulless eyes. 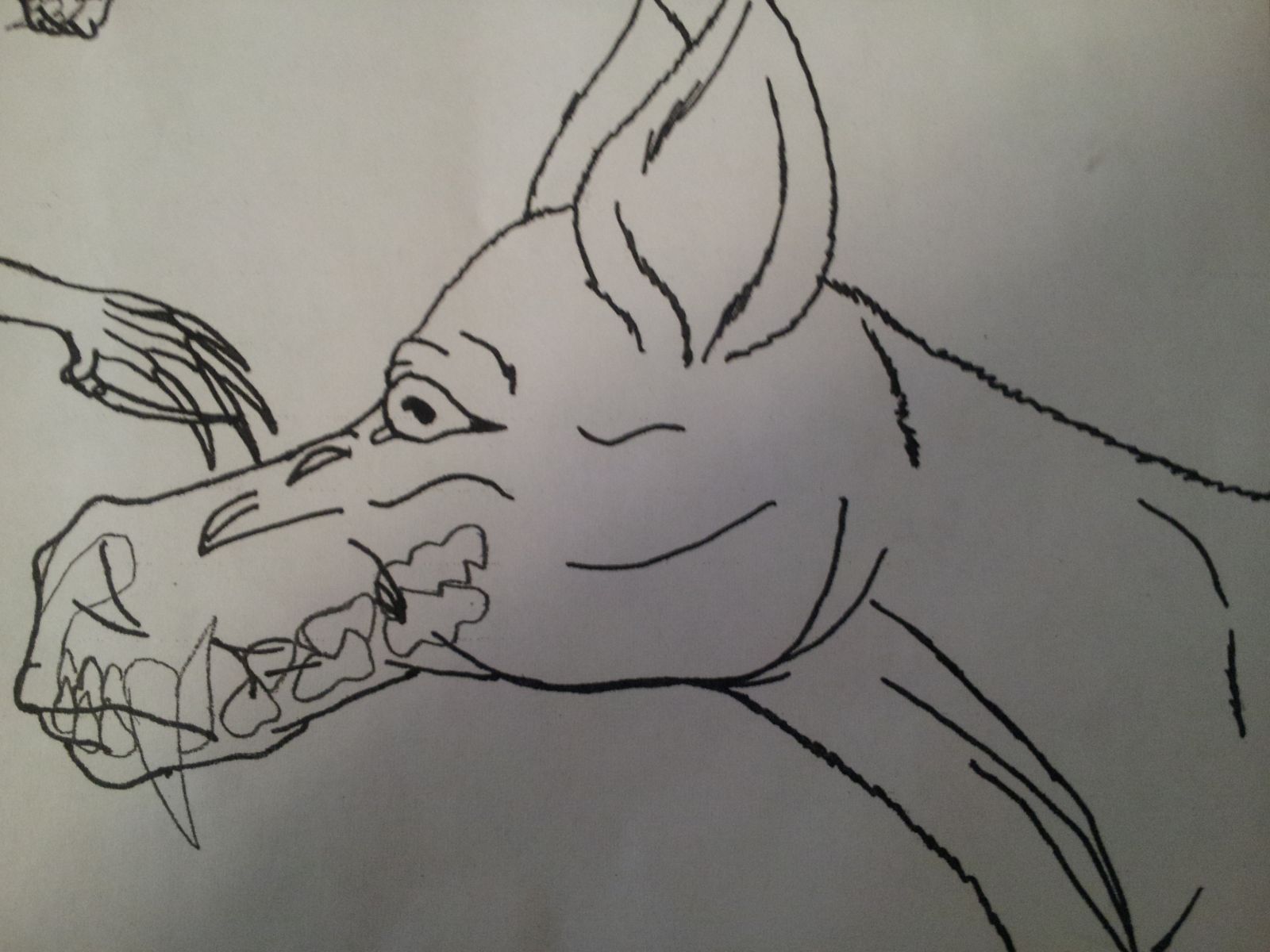