bailey would love your feedback! Got a few minutes to write a review?
Write a Review 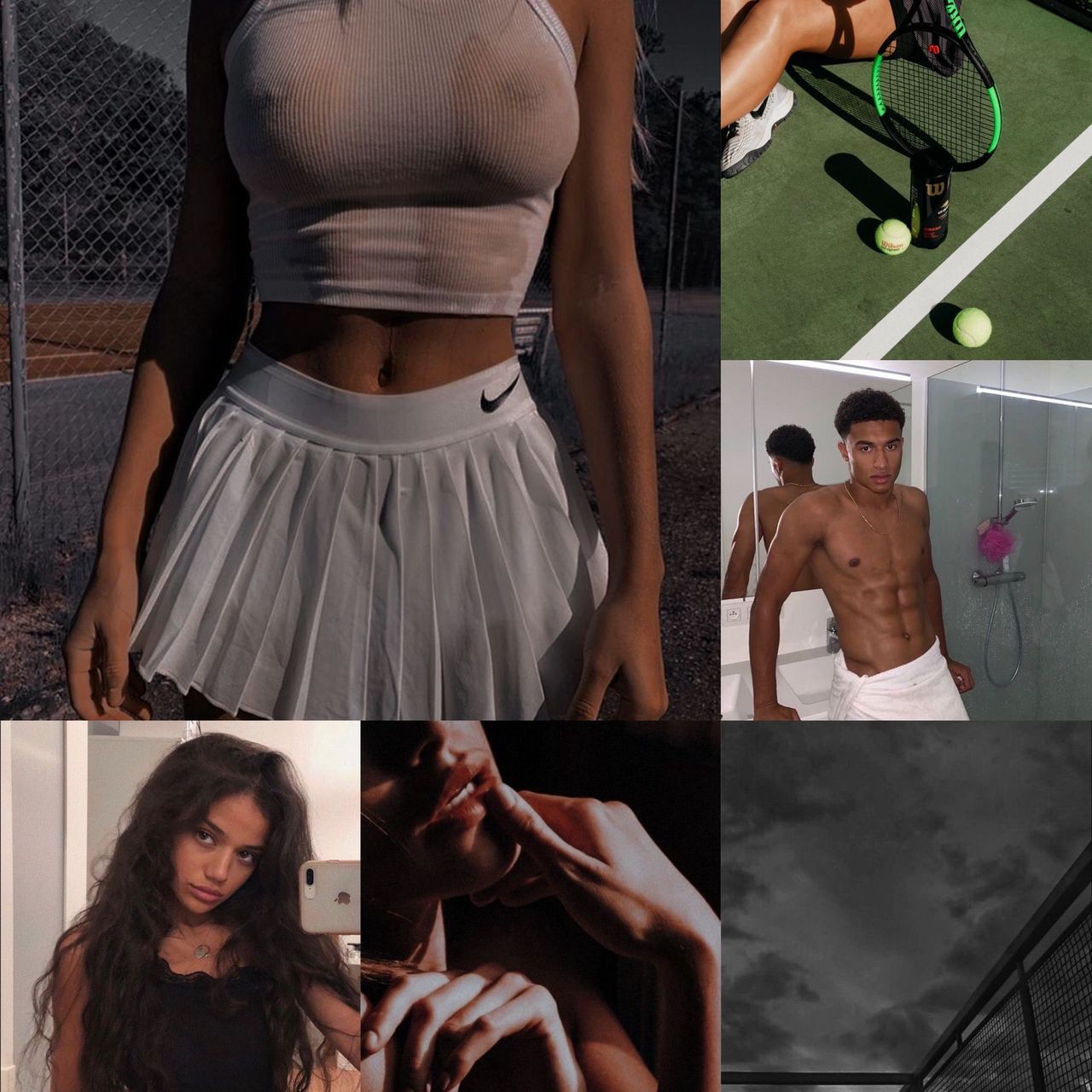 Willow was thrown out again. Even though it was her own house— her own life, somehow her parents got control over it.

Willow made a name for herself in the tennis world, with no help from her parents— yet they still had control over her. They had thrown her out of her own house, not that she minded. She had a ginormous backyard where she would play tennis and play in the pool until she got the courage to go back in.

The one problem was she was kicked out without anything on. She was in her room with her skirt and tank top on when her mother came in screaming. So now, Willow was stuck outside in the hot, summer day; sweating from playing tennis in her backyard.

Another strong hit after another against the wall, she practiced and practiced until her body was drenched with sweat and her shirt became see-through.

She was embarrassed to say the least but no one else could get into her yard, let alone see her so she didn’t mind.

All except Zion. He knew how to get in and out constantly, he would sneak into her soon some nights and show her a new world. One of love and immense pleasure.

Hit after hit, run after run, she was growing tired and out of breath. Sitting down her racket, she grabs a water bottle from her shack refrigerator and gulps it down.

“Wow, look at my little Willow.”

Her body freezes and a smile makes a way to her face. Quickly covering her tears and keeping her back faced to him she replies,

“Hello baby.” He husks as he trails his fingertips up and down her arms. He towered over her. He was a basketball player for the 76ers raged at 6"6. Willow was lean and a pretty, tall girl at 5"7 but he managed to make her feel so tiny.

“W-What are you doing here?” her breath ragged as she grows and nervous and excited.

“Am I not allowed to see my baby?” he teases.

“N-No! Y-You are b-but y-y-y-you only usually come at night.” She states trying to hide herself from him as he pulls her closer.

“I wanted to see you.” He whispers.

“I wanted to pleasure you and what are you doing? Hiding from me. Nothing I haven’t seen before little Willow.”

He prays her on the way and she inhaled cold air passes through her soaked shirt— and now her soaked panties.

“Look at you, hiding whats mine.” He chuckles.

“Not caring if the world sees it. Practicing out here, showing your nipples huh? Showing whats mine? We’re you waiting for me to show up? Weren’t you Willow?”

She sucks in a breath as her face turns bright red, She was embarrassed because yes, yes she was waiting for him. She was secretly putting on a show, purposely bending over and prouding her chest, purposely bouncing her breasts roughly and sexually, purposely letting the tennis ball ever so often hit her nipple as she let out a moan. She was too embarrassed to admit, for it was embarrassing— who plays tennis while thinking about a man touching them.

He grabs her boobs in his large hands. His hands were so big he could almost fit all of them in his hand.

She gasped at his warm hands on her and she pants a uneven pace. He skillfully brushes his finger tips against them and she turns her face to him.

Meeting his eyes, she sees he is hungry. Hungry as always. Boldly she takes his dick in her hand though his pants and squeezes. Zion throws his head back and grunts. Not wasting any time he rips her shirt in half and trails his eyes on her big globes. They were beautiful.

His hand slides up her skirt and down her folds.

“Hm, so wet little Willow.” He hums and collects her juices, spreading them and preparing her for his cock.

After coating her pussy and his fingers with her arousal he brings them up to her lips.

“Suck.” He commands and eagerly she takes his fingers. Sucking gently and swirling her tongue, teasing him.

Picking her up and wrapping her legs around his waist he latches his warm mouth on her nipples.

Letting out a cry, she throws her head back and unconsciously her pussy grinds on his covered cock. Grinding like a maniac as he works his tongue, she feels the tension build up and up.

He bites on her bud and she lets go, releasing it all over his shorts.

Her face blushes and without warning he shoves a finger into her hole. He lays her down on the shack table and relentlessly pounds his finger into her.

“No.” He growled as he took out his drenched finger. She whimpers at the feeling of his warmth leaving her, but her heart beat rapidly when she saw him take off his pants and shirt. She gazed at him in awe. He was the most beautiful man she has ever seen. Not that she had seen many men in her years.

She quickly sat up and tried reaching for the large tent in his tight boxers. He had a huge bump in the middle of his tight black boxers— the width of a tennis ball, and she knew from previous times that the length was outrageous as well.

Before reaching what she desired he slammed her back against the table.

“No, no little Willow. Not yet.” He tsked watching her ginormous mounds jiggle as her back met the table.

He lets her lay there while he pins her hands above her head. He watched her from above as his other hand gently took off her thong.

Again Willow was too afraid to admit it but she wore no bra and a thing with a skirt because she knew, eventually he would come visit her. And the past two nights all they did was talk over the phone. Just talk. And she didn’t want to just talk this time when he visited her.

“So naughty little Willow.” He taunted.

His words always awoke her insides and she squirmed with the need to be touched by him. She dripped down her leg and when he pulled her thong in his hand he could feel the wetness as he smirked.

“Oh little Willow.” He chuckled as he sunk down and glided his tongue on her clit, his scruff slightly touching her lips making her body shutter.

He sucked on her clit as he slowly entered a finger into her. Sucking in a breath she moaned and closed her eyes trying to stop the tears from gathering and falling.

Gliding his finger in and out she shuttered and shook as she tried to contain herself.

“Look at me Willow.” He growled as he stood up towering over her laying form. She obeyed and met his dark gaze.

He focused his eyes on her standing buds and captured them. He moaned as she cummed again and a tear escaped her eyes.

His dick was sore and hard as he watched her.

“Please Zion. Please.” She begged and her tears were streaming down her face.

“What do you want Willow?” He husks as he kisses her neck.

But before she can finish he rams into her. She cries out a scream as the tears leave her eyes. He kisses them away, every time he was in her she never got used to it. I could’ve been the fact that he was abnormally big and thick and she was as tight as a rubber band.

“Look at you-” He mocks as her body vibrates in pleasure. Sobbing at the pleasure that rushed into her.

“What do you see little Willow?” He taunts. He always did this— it made her feel wet and red and he loved it.

It was like trying to teach her to talk for the first time and he thought it arousing.

“Hmm what about my cock baby?”

“It’s big and thick and veiny and Ahhhh it- it feels good and ahhh ahhh ahhh it’s- it’s stretching me out!” She cries as he chuckles.

“Hmm god baby and what is your pussy doing?”

Seeing stars, she cries and he wipes her tears smiling down at his girl.

“I love you little Willow.”

She breathlessly smiles in a daze, his face blurry as she is about to pass out. But the thought pops in her head.

“Zion you didn’t use a condom.” She smiles.

He chuckles and smiles at the thought of them having a newborn.

Pamela: I loved everything with the story especially the way I held you so interested to see how it ended!

Esma Avril: I just read Aston's and Anna's story and just had to give a review. That story is on point. When you reach that age you have to decide what's important to you at that stage of the journey called life. I loved that after the advice their friends and family gave her, she was able to face her fears ...

Kumkum : Amazing story and very well written. I am loving it. It's good to have such writers. You are fabulous.

Read Now
The Good Girl next Door by Heidi Mae

Read Now
The Bet and The Popular Boy by jenniferpetras

glorykengonzi: Perfect book i really loved it soo much enjoyed it alot

Carolyn Russell: I love the mix of romance and action in the story. It makes the story more interesting. The characters were very well thought out and the details made them seem very realistic.

Blanche: Very good. I turned a boo g eye to the errors as the storyline was very interesting. Love the conclusion.

sonia: Omg like seriously that's crazy he's not dead but he's alive so sad tho at least they can be a family again I hope the 2 find their mates soon !!

melindajordaan: Love this stories very much.