I closed my eyes in the hope of seeing those two beautiful green orbs and perfect strawberry blonde hair again. The memories of her gorgeous smile invaded my mind so much that I could imagine her next to me, her sweet feminine scent making my senses go haywire. What did that girl do to me? We only spent a few hours together but I could not get her out of my mind.

What was even crazier was that I found myself thinking about her every so often and yet, I knew she was not my mate. She couldn’t be- she was human and I was a bear shifter, and shifters only mated within their own kind.

On top of that, my mating text, the one that every shifter had appearing somewhere on their skin once they had touched their mate for the first time, appeared on my lower abs after we returned from the rescue mission down south, so I must have met my mate amongst the shifter that we released from Markolf’s mansion after the cambion had kidnapped Natalia Macalister. I just needed to figure out who it was...and to stop thinking about Riley’s stunning best friend.

One thing was sure- whoever my mate was, she was no shy wallflower. I was certain of that because the text, which revealed what I would hear my mate say around me so that I could recognise her, told me that she was more than equipped to handle my boldness. I lifted the hem of my shirt a little and ran my fingers across the words etched on my skin.

“I scratch and bite.”

Yes, she was certainly one hell of a ballsy character.

“Goddess, Callum, you need to get laid, mate.” My Beta Jack rolled his eyes as he gave me a pitiful look from the other side of the desk. “You look more like a lovesick teddy bear than a fierce Alpha. If any of the idiotic members in our sleuth get wind of your current state, they will waste no time in challenging you for the position.”

Jack was a mountain of a man and my right-hand ever since I won the Alpha position from the previous Alpha thirteen years ago. His bulky body and tattoos, coupled with his usually sturdy look, gave the impression that he was a tough man but I knew better than anyone how loyal he was and what a big softie lived underneath the hard exterior.

“Come on, you deserve to have some fun after the battle against Markolf,” Jack continued to push, while his expression took on a devilish smile.

His face changed in a matter of seconds, the jokey mood giving way to genuine surprise. “You met your mate and you are only just telling me that now? What the hell, Callum? I thought we were friends!”

His statement was half-joke, half-serious but I was once again too lost in my thoughts to really indulge him with a proper reaction.

“Well, I have no bloody clue who she is, so we are more or less back to square one. All I know is that it happened while I was down in London.”

“That’s what this is all about?” His mocking snort earned him a low growl from my side. “Callum, you are my Alpha and I respect you enormously but sometimes you really are a stupid prick. If the Sun Goddess had picked that woman for you, whoever she may be, then you are fated to meet. So, relax- it will all work out. “Confidence oozed from him as he tried to reassure me, even if I was having difficulties in believing him on this matter.

I pressed my lips in a slight grimace, as I felt the sinking feeling in my stomach. “Yeah, that’s cool and all, but why the hell am I only able to think about a certain human instead?”

My mind was getting tired of the constant internal conflict that I had been battling for the past few days. Fantasising about someone else was not supposed to happen once you found your mate, although I had still not actually discovered who my mate was. Even so, our touch, whenever it had happened earlier that day, had triggered the appearance of mating text and with that came the mating pull that was going to draw us together until we finally found each other and mated.

My Beta’s eyes widened and I could feel his sudden unease. “Please tell me that you are not talking about Riley Moreau- you know, the human with two mates.”

It was my turn to be all shocked and surprised by his statement. Riley and I had our fun when she came to Scotland but we both always knew that fun was all that it was.

“What?! Of course not. What the hell do you have me for? I don’t want to steal anyone’s mate.”

“Thank the Goddess for that because you are a mean fucker but you would have still found it difficult to fight a wolf AND a dragon.”

He was right. Riley’s mates, Aiden and Rafe, were dragon and wolf shifters, and both of them Alphas. I was just as strong as them but taking on both of them would not have been a good idea.

They were certainly not thrilled about my closeness with their mate, that was clear, but they also knew that whatever had happened between us was before they all discovered they were mates and they knew that they could always count on me whenever the three of them needed help. Something that all of us were sure of after having worked together to take down Markolf, the cambion who tried to destroy the shifter world by stealing the life force of shifters- our animal spirits.

“Aiden could probably have been reasoned with but Rafe Macalister would have been a lost case,” I chuckled as I remembered Rafe’s reaction when he saw me with Riley at the Macalister gala weeks ago. Not that he hadn’t just fucked that desperate she-wolf waitress but I was pretty sure that neither he, nor Riley knew that they were mates at that point.

Jack laughed but despite his seemingly jokey mood, he narrowed his eyes at me, trying his best to figure me out at that very moment. “So, who is the mysterious human then?”

My thoughts immediately drifted back to Scarlett. Her feistiness when we first met impressed and amused me in equal measures. She nearly knocked me out with a vase because she thought that I was an intruder, even if I was a mean fucker, as Jack had put it. Of course, she did not know that I was a shifter, let alone the bear Alpha of my sleuth. We spent the evening chatting and laughing, although I badly wanted to pull her in my arms and kiss those luscious lips of hers. Yet, that would have been reckless on my side- she was Riley’s best friend and I would not have wanted to ghost her, but there would not have really been anything more than that night. We were too different, our lives worlds apart. If only my stupid brain finally grasped that too instead of making me think about her.

“It doesn’t matter. She is human and you know shifters mate with their own kind. So my mate must be one of the bear shifters we rescued that day.”

His eyebrow cocked up, making it clear that Jack was not convinced. “Well, Riley is human and she has two different shifters as her mates.”

“First of all, Riley used to be a wolf shifter- having a mate was something that was most likely decided when she was born. Secondly, her triad is rather unusual and, from what I understood, it also had a lot do with their destiny related to Markolf.” I was not even sure why I had to explain to Jack that even the mere suggestion that he was making was absurd and impossible in our world. “Can we close the topic? Not like I would ever bump into Scarlett anyway. And we have more urgent matters to discuss.”

My voice came out more annoyed than I had wanted it to which only amused Jack. I loved the guy but he really knew how to push my buttons sometimes.

“Scarlett, aey? Now that’s a pretty name.” He twisted his grin into a smirk as her name rolled off his tongue, which pissed the hell out of me. I didn’t let it show, though. I had no right to get territorial with a human that I had just met, especially not when my mate was out there and I needed to find her. “Anyway, I won’t fuck with you on this matter but you should know that many in the sleuth are getting anxious, Callum.”

“Well, the sleuth needs a Luna and the fact that you don’t have one after all these years is making some bears wonder whether there would ever be one. Some are even attempting to cause trouble by claiming that the Sun Goddess may not have granted you one because you are not worthy of a mate. And they are using that to spread rumours that you are not worthy of being an Alpha either.”

Anger churned in my chest. All the bears knew how sacred our destined mates were and that meeting your mate was up to fate and the Sun Goddess. It was not something you could rush or choose when to happen. Whoever was spreading these rumours did not care about that though. Their goal was different and I knew it- the Alpha position.

“Easy there, pal,” Jack’s words brought me back to reality as he tried to calm me. “Everything is under control for the moment. Our sleuth loves and respects you as the Alpha, Callum. But you should know that the longer there is no Luna, the more the doubts that are being seeded may set roots. And you know that a strong sleuth needs its Alpha pair.”

My bear growled, neither of us happy with the situation. “They want Luna? I’ll give them a Luna,” I barked and grabbed my jacket as I headed out of my office in a rush.

“Where are you going?” I heard my Beta shout after me while I walked out of the door.

These two will be so much fun to write about but I hope you will bear with me(😂🙈) as the next chapters set the scene.

Let me know in the comments what you think so far and don’t forget to vote if you liked the chapter.

Feeling lost about what Callum is talking about in this chapter? If you are new to the series, don’t forget to check out Stronger as One (Book 1) first.

Hope you will all be back for Chapter 3 tomorrow.

P.s. Here is a quick reminder what Jack looks like in my head 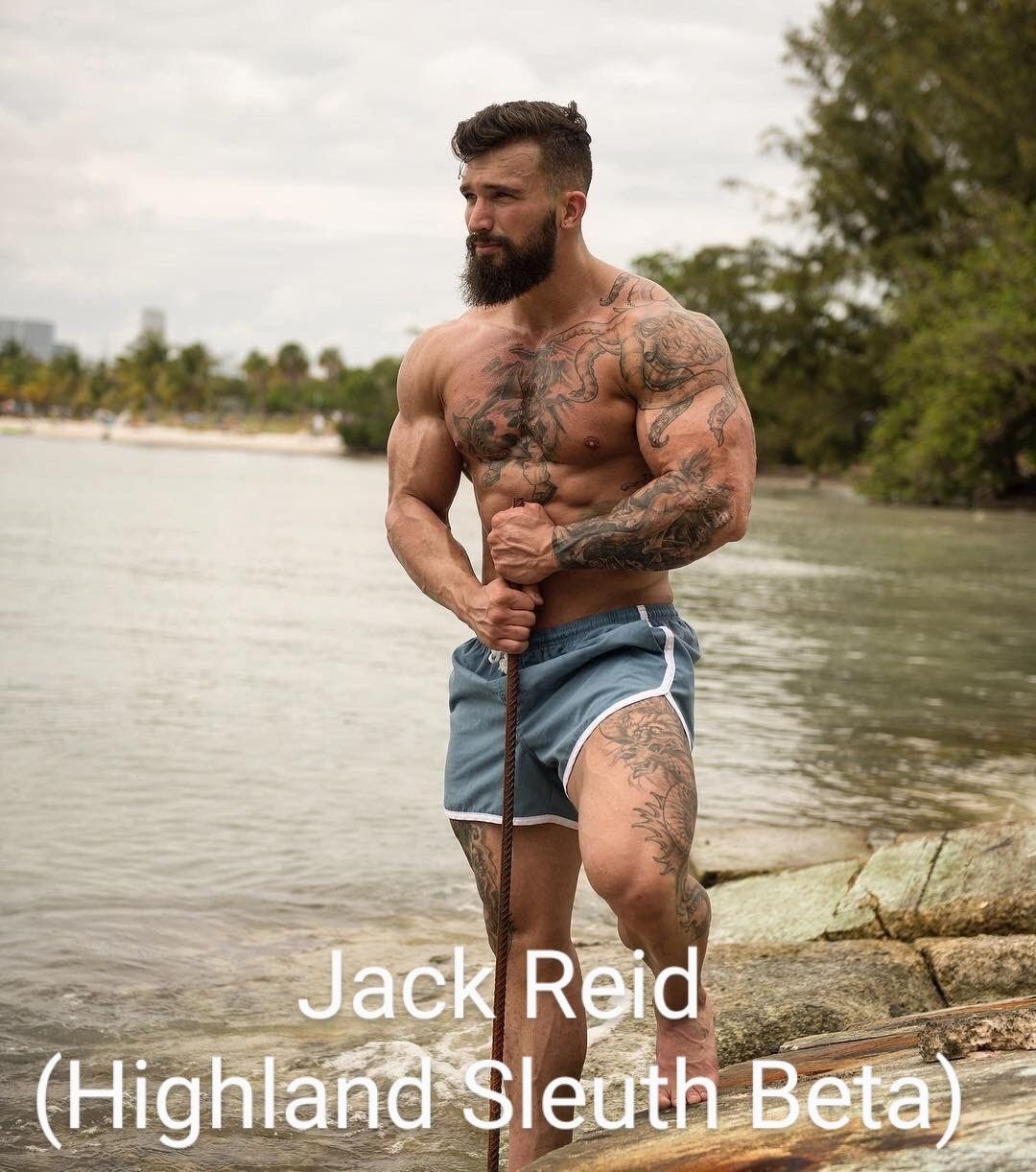