I was not sure if I was more shocked or pleased with the turn of events. The attraction and fascination that I had felt towards her made complete sense now that I knew that she was my mate, and I was certainly happy to have found her and, on top of that, that it was Flame. She definitely was fire, and both Mahon and I were excited about having her by our side once we were mated.

Yet, I also couldn’t deny my surprise in discovering that my mate was human. I couldn’t care less what she was- the Sun Goddess had matched us together and that meant that we were perfect for each other- but it was something extremely unusual in our world, unheard of even. Well, until her best friend ended up mated to a wolf and a dragon.

Of course, Scarlett running out like that was not ideal, but I decided against going after her as I needed to give her space. Not to mention that I also had to figure out how I was going to explain everything to her.

Mate, Mahon roared once again in my head, rising to the surface and wanting to take over so that we could find her. But I knew that would only backfire- if she got freaked out by the mating text, she was certainly not going to be more thrilled to discover that she was mated to a shifter. A bear shifter, a being of whose existence she knew nothing about.

I pushed him back, calming him enough for him to stop pacing anxiously, even though he wasn’t exactly thrilled that I had denied him the opportunity to get to our mate. Getting back to the sleuth was a bit of a blur thanks to the adrenaline that was coursing through my veins but I was content to find Jack waiting for me on the veranda.

“There you are! Where on Earth did you go, Callum?” His eyebrow pulled together in question before his forehead creased with concern. Only then did I remember how I had stormed out because of the rumours that Jack had shared with me. I set out to get more information from Aiden that would have helped me track down my mate but clearly, the Goddess had it all planned already.

My hand landed on Jack’s shoulder as I patted his back with a smile. “I found her, Jack.” My tone did nothing to hide the elation in my voice.

He whipped his head around to look at me. His eyes widened, and his mouth slackened. “What do you mean? You know who she is?”

Jack’s brows furrowed in confusion while he listened to me. He was evidently trying to put the puzzle together with the pieces that I was giving him.

“I don’t get it. There are no other sleuths close by and you haven’t been gone for that long, so where did you find the she-bear that is your mate?”

“She is a friend of Riley’s,” I stated matter-of-factly as I walked past him along my veranda. An amused expression quirked up the side of my mouth when I stopped to study Jack’s reaction.

His head whipped around so fast that I could have sworn that I heard a crack. “Moreau? Hold on, is she a wolf?”

I chuckled heartily- this was a fun game. “No.”

“No.” My grin grew wider the more his eyes bulged out with every guess.

“Wait a minute, are you trying to tell me that your mate is a human? Goddess!” He sounded more astounded by this than opposed to it, so that was a good start.

No one could ever change my mind about my mate but it certainly made my life easier if my Beta and, of course, the rest of the sleuth accepted her without me needing to persuade them. Not that it would have been difficult- my Flame was stunning, funny, feisty and, underneath all that bravado of hers, there was a kind and caring person. Yes, she was the perfect mate for a bear like me.

Jack cleared his throat and I snapped back to the present.

“I guess congratulations are in order then. It’s bloody surprising that she is human, not going to lie, but who I am to question what the Sun Goddess had in mind,” he said as he pulled me in for a bear hug. “So, when do we get to meet her?”

My fingers rubbed the base of my neck as I awkwardly looked at him because the truth was that I was not sure how to answer. Yes, I knew that she was my mate but we were nowhere closer to being mates than hours earlier. There were so many secrets between us already and I did not like that one bit.

I looked around at the peaceful forest surrounding my Alpha cabin. The sleuth was based in one of the most stunning forests in the area, and something told that if I convinced Flame to give me a chance, to fall for me and the sleuth without knowing of our bond and our destiny, there was no way that she would turn us down.

I just needed to figure out how to do it.

Despite my best efforts to get some sleep, my mind seemed to have other plans as I spent the whole night tossing and turning while going over what happened at the restaurant over and over again.

My gut and my brain were in a constant fight ever since I ditched Callum at the fish and chips place. One was trying to convince me that the whole situation was extremely creepy, while the other one argued that there was a reasonable explanation for everything. And then there was my body which longed to be near to Callum again. It was like he had put a spell on me that beckoned me to him. Yet, I couldn’t also deny how well we got on. Every conversation, every gesture felt like I had known him forever. Like he understood me on a level that no one else had before. Almost like we were connected.

My skin burnt hot under the touch of my fingertips as I traced the words on my skin.

You’ll crawl and beg too

The sensation that spread from my arm and across my whole body brought to the surface the lust for the living Adonis that I was trying to bury deep down in my memories because I was too scared to admit the intense feelings that man sparked in me. Jesus, I did want to beg. I wanted to beg for him to kiss me breathless. To explore my body with his strong hands. To take me and have his way with me until we were both sated and spent.

This is madness- I barely even know the man and I am sitting here, fantasising about him.

Not to mention that I was not really here for a holiday. I needed to keep a low profile until it was time for the trial but once my shady ex-boss and his associates were sent to jail, I was going to return to London and continue with my life. Maybe I was going to reconsider that plan if I happened to find the man of my life but I knew that the guy who got me to tattoo some kinky text on my arm was not going to be the one. No, he was the type of guy who your friends would rather tell you to run from and that was exactly what I was planning to do here- stay the fuck away from Callum Andrews.

Then again, there was no harm in indulging in some fantasies.

As if with a mind of their own, my hands slipped underneath the thin top and shorts that I was sleeping in, looking for contact with my skin. My nipples hardened as my palm cupped my breast and pinched one, while my other hand moved along my stomach until it reached the hem of my lace panties.

On cue, Callum popped up in my mind in all his glory, and very much without his shirt.

This is my fantasy, after all.

His seductive smile alone was enough to make me all hot and bothered but the thought of his hands on my body instead of my own had me biting my lip as my core clenched with desire. I imagined him guiding my every move as I pulled the lacey fabric enough for my fingers to find my pulsing clit. I ran the pad of my digit over it, caressing it in a teasing way. My touch was so gentle that it was as if I barely even did anything, yet my body was so tense from my desire and lust for Callum that I found myself shaking as a result of the contact.

Desperate for more, I repeated the motion, picturing the muscular hottie between my legs, his tongue replacing my digit. As I indulged further into my hot fantasy, my fingers entered my wet core and began thrusting at an ever-increasing pace until they were moving with a frantic need. My other hand, meanwhile, focused on my clit, rubbing and stroking it. My moans and panting could probably be heard in half of the castle but I didn’t give a damn, even if I had not been alone. Heat began pooling deep inside me until I reached the brink and fell over the edge, my rapture spreading through me in rolling waves of pleasure.

My head sank into the soft pillow below me while I tried to catch my breath. Slowly, my mind started to clear as the orgasm-induced brain fogginess began to disperse. I lay in the bed, feeling way more relaxed, physically, than I was minutes earlier. But the relief was only temporary because no matter whether I wanted to admit it or not, the reality was that this man that I barely knew anything about- the one I was fantasising about and yet I was trying to stay away from- had an inexplicable hold on me and that made him dangerous.

One thing was clear- I needed to stay the hell away from him.

I hope you enjoyed the double POV, lovelies!

These two are going to be such trouble and I can’t wait for next week to show you a bit more of their dynamic. In the meantime, we get to find a bit more about Callum and his sleuth on Friday so I hope you are excited to learn more about our favourite bear Alpha.

But most importantly, how are you finding Bear with Me so far? I am dying to know what you think as it so such a different experience for me in comparison to SaO that I am really not sure if I am getting it right...😬🙈🙏🤞

Enjoy the rest of the week in the meantime. 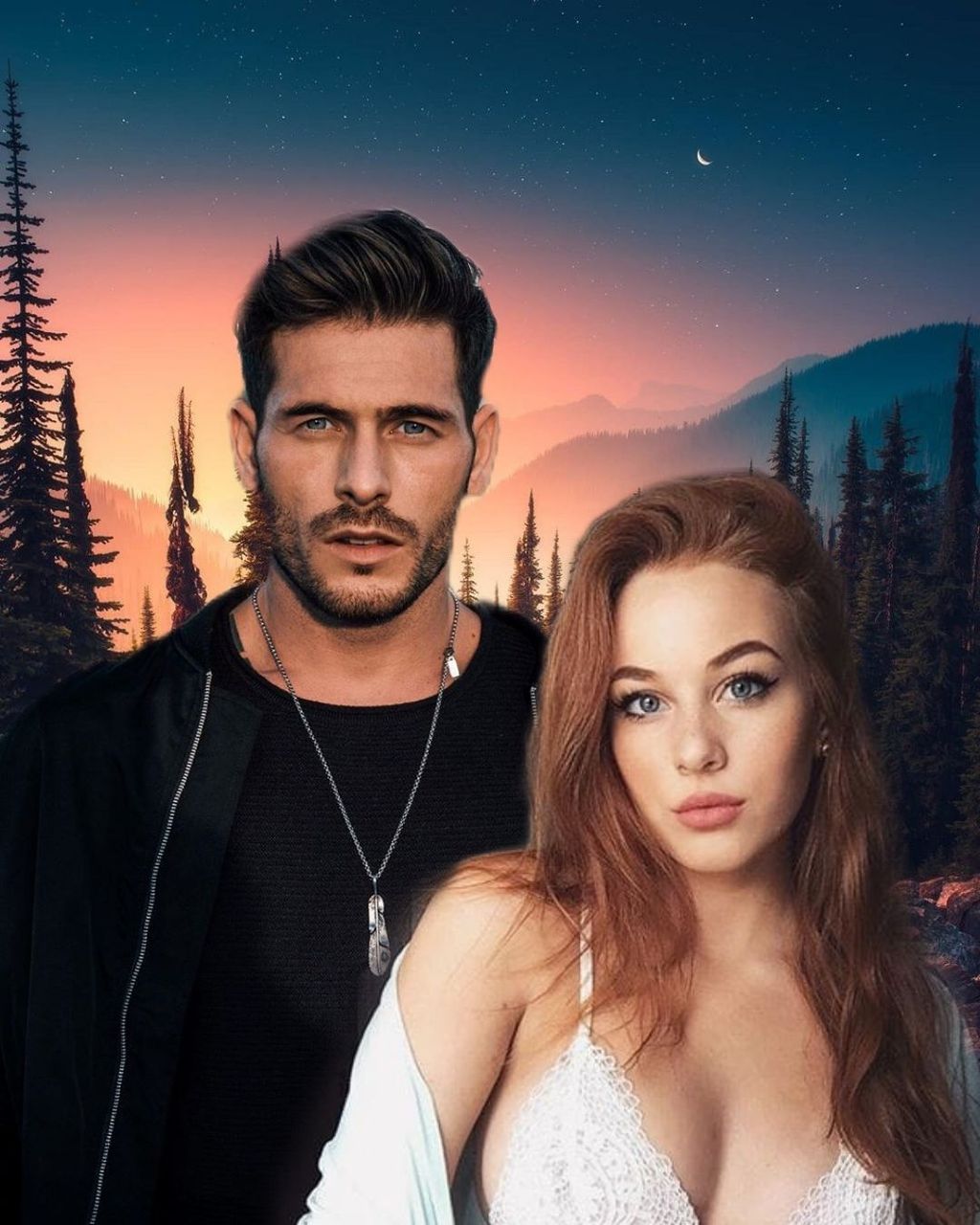