I scanned the location as we got out of the car and couldn’t believe that this was what Flame had in mind when she mentioned that she was picking what we were going to do next. The Alpha in me never backed down from any challenge but this activity was certainly not something that came naturally to a bear shifter. We very much preferred to have our feet on the ground than to be hanging off trees.

“Don’t tell me you’re scared,” my fiery mate snickered. “Or are you worried that you can’t keep up with me, big boy?”

Her eyes twinkled with daring sparks, clearly feeling confident that she was teaching me a lesson but she had no idea about the fire that she was playing with- I was going to paint that perky butt of hers a beautiful shade of red once we were mated. Yet, I had to admit that I did get a kick out of her ballsiness. If anything, it made me appreciate her even more.

As the mate of an Alpha- and especially as a human- there were always going to be others that were going to try to challenge her, to push her into a corner, and if I stepped in to protect her, it was going to be seen as a sign of weakness on our part. But seeing her like this, ready to not only not take shit from anyone but also be the one challenging the other side, I knew that she had what it took to be a formidable leader of our sleuth together with me. And either way, I did not want a submissive mate but someone who wanted us to be a team and who pushed me to be better, just like I was going to do with her. Yet in the bedroom, all bets were off.

“Go Ape? That’s what you had in mind?” I looked again at the treetop ropes courses ahead of us.

I was all up for outdoor adventure experiences but not so much for ones in the air. Tackling dangling obstacles and flying around on multiple ziplines from various heights was not my definition of fun.

We can’t chicken out, Callum, Mahon pointed out through our mind link. I will not allow our mate to think that we are weak.

He had a point there and I was certainly not going to back out, the very least because of my pride.

“Oh, come on- it will be fun.” Scarlett was glowing with excitement, itching to get started with the course.

Seeing her like this crushed any doubt that I still had about the whole thing. It was natural for a shifter to want to make their mate happy but I also couldn’t shake off this feeling I had since meeting Scarlett again here in Scotland that behind all her smiles, there was also something troubling her. She needed this- to be carefree for a while and to enjoy herself.

And it could also work out in my favour.

“Alright, alright. We are doing this but-”

Her beautiful face scrunched up in confusion. “But?”

“But we need to do this properly. A little competition, what do you say? If I win, I will take you for drinks after this.”

Seeing her relax again reassured me that she was not completely opposed to the idea. A touch of anxiety still crept up in my mind as I waited for her response while she pondered the idea for a bit before she replied.

“It’s on.” Gathering her strawberry blonde mane into a messy bunch, she pulled her hair up in a high ponytail that made her look more determined, more fierce. Like a warrior about to go into a battle. “Shall we then?”

Fifteen minutes later, we were strapped into our harnesses and ready to go, much to my relief. The safety briefing that we had to go through tested all my patience when the annoying instructor was low-key flirting with my mate. I had to keep cool for the whole thing because neither of them would have understood why Mahon and I were growling and roaring on the inside.

The afternoon sun shined brightly in the sky when we stood at the start of the track. I looked down from the wooden platform at the seemingly endless zip wire that we were going to start with. The view of the forest below us was stunning and it reminded me how lucky we were to call this area home. The smell of the pine trees in the air alone was enough to energize me for this little competition with my unsuspecting mate.

“I have to warn you, Callum- I can be very competitive.” I turned around to look at Flame, attaching her harness to the zip wire, ready to go.

An impish smile made my lips twitch as I pressed them together to suppress a grin.

“I would expect nothing less.” My words reached her just before we both jumped.

The adrenaline kicked in while we zipped down the wire, but I still managed to take a second to appreciate the sight of the roaring, tumbling waterfall on the way.

As soon as we landed on the other side, we both rushed to get through the series of five stations that we had to get through with lines to scramble across, logs to traverse and nets to swing into. Bear shifters did not have super speed like wolf shifters or fox shifters’ agility, but I was still a shifter and an Alpha, so the obstacles were not too much of a challenge.

What was surprising was how much I found myself enjoying the track, undoubtedly because of the company as well, even if we were competing against each other. Scarlett was somewhat of a hidden athlete, keeping up with me for the whole course to the point that I wondered if she was actually going to win.

After a couple of hours, we were finally at the final stretch and the finish line right in our view. All we needed to do was get there from the final station via the suspended rope bridge. If I managed to beat Scarlett to the bridge, my victory was going to be certain.

My gaze shifted to my mate, who was going through the final obstacles next to me. Her determination was admirable and impressive, and it filled me up with pride. I wanted to take her for that drink really badly. I wished for nothing else than to spend more time with her but I also wanted to give her this win because she deserved it. Mahon and I agreed on that.

Without raising any suspicion, I slowed down just a notch so that Scarlett could push further ahead and cross the bridge without me. Soon enough, she sped past me and made it onto the wooden platform of the final station. But before she went any further, she stumbled over something and dropped on the floor, allowing me to catch up with her.

I heard my bear chuckle in my head. She is a terrible faker.

He was right- there was nothing that she could have tripped on and her fall was way too elegant to be genuine. I smiled to myself as I reached her, knowing what this meant.

“Are you okay?” I offered her my hand to help her back up. “What happened?” Even if I knew the answer, I was curious to see what she was going to come up with.

My question got her all flustered and a warm girlish blush pinked her cheeks.

“I...I guess there was something and I tripped,” she mumbled and dusted herself off. She looked me straight in the eyes and I returned her gaze, the intensity of the moment escalating until she spoke up again. “Thank you.”

“It’s a shame you...tripped. You were on track to win this.” I tried to put on my most sympathetic face, even if underneath I was grinning like an idiot.

“I was, wasn’t I? What a shame.” Her deep sigh of regret sounded just as authentic as her fall.

“What if we cross the finish line together?”

The twinkle in her eyes made my heart flutter. “I would like that.”

We both took a step towards a bridge until I felt her place her hand on my chest, stopping me in my tracks.

“Wait, what about our deal? Would you still get your drinks?” The slight hesitation in her voice was subtle, yet I didn’t miss it.

I could see the wheels in her head spinning as she stood in front of me, chewing on her cheek nervously.

“Well, I guess it’s a tie, so the drinks can still be on. What do you think?” I asked, cool as a cucumber but, in my head, I was praying that she would say yes.

“That would only be fair.” A beautiful smile broke through her lips and I found myself thinking how sweet they would taste when I finally got to kiss her. “ Let’s cross that finish line then.”

I am squealing here 😍 How adorable are these two? 🥰🥰

Not to mention that I am so jealous that they did GoApe! It looks amazing (have a look on https://www.youtube.com/watch?v=qlc27XnYAcM) ☺️

Will their drinks at the pub be as fun as their outdoor adventure?

We get to find out on Tuesday but if you are falling in love with Callum and Scar, I can promise you that it won’t disappoint. Plus, what could go wrong? It’s a pub, after all...

I look forward to your comments, my lovelies- they are my favourite part about posting chapters.

Don’t forget to click on Like or to leave a review if you are enjoying the book so far (note that you can always update your review as the book progresses but they help the book get discovered by more readers at this stage0.

Have a lovely weekend,
Iveto xx 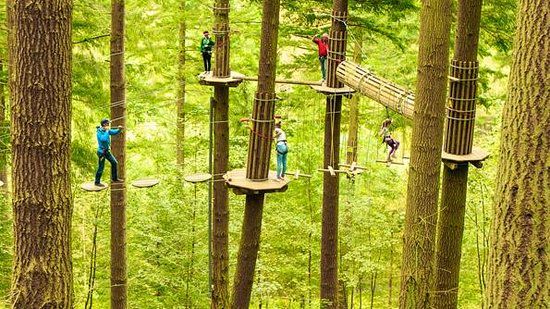