prismdreams would love your feedback! Got a few minutes to write a review?
Write a Review 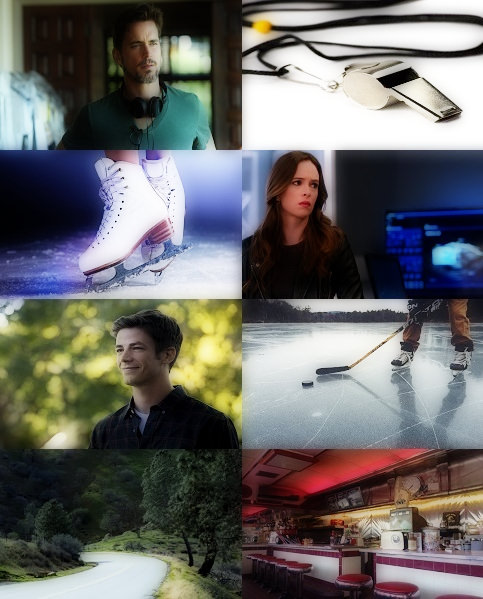 Caitlin Snow huffed as she took off her skate breaks and skated in fury away from the drama. She was mad and this time she wasn’t going to let off. This new coach wasn’t working, there was no way they were going to move forehead with his ego stepping over her carefully crafted routine.

“Caitlin, hello? Am I speaking another language? Just do the routine this w—”

“Whatever, just leave me alone. Get a real job.” Caitlin shouted over her shoulder, aware of her limp but still did her warm up exercises.

Jack sighed deeply, on his last leg of patience. “Caitlin, you know how you get. Why won’t you just listen me?! Now start over.”

She glared at him, refusing to move. He had hit a nerve and she wanted him to feel what she was, if he ever felt anything.

“You know what, screw this, this is just the last straw Snow.” He shouted, feeling relieved that he finally said what he wanted to, only this time it felt different.

He had no intention of going back, this was it.

She heard loud stomping and a heavy door slam shut. She flinched and brought her toe pick stop to pause her skating. Was he right? She shook her head. He can’t be.

She moved on the ice rink, swirling around as if she didn’t care. She stopped abruptly when she heard an alert on her phone. Knowing it was probably him she ignored it for a moment. Instead she found herself gritting her teeth and charged for her mobile.

Even though she told herself to remain calm what she read on the screen made her worry.

It’s not a joke Caitlin, this time I’m not coming back.
-Jack

She swallowed and tried to push her fear away but she sunk down on the bench wondering what she was going to do now. She had 8 weeks to prepare for nationals and she was fucked. Jack had threatened to quit before, many times, but he always came back because he needed this just as much as she did. Winning was everything to her. Skating was her life, without the competitions she was nothing, a small time, a girl who didn’t fit the mold.

She wiped her eyes and took a deep breath. It was never going to be the same. This was the second coach she’s had since she left home and gave her all to climbing the ranks of the competitive world of figure skating. She needed her abrasive attitude to get things done. She realized a long time ago that no one was going to give her any handouts. She knew nobody in the industry and no one to help her achieve her dreams.

Going at this alone was what she was best at. She looked up to Tonya Harding, someone from her elk, someone who understood where she belonged. As she lit her cigarette she felt slightly better. She sucked on the smoke long and hard as she thought about her next plan. She briefly looked at the exit just to make sure if he came back but rolled her eyes at her bad luck.

“Maybe he was serious this time...” she trailed off taking another long drag of smoke, “What the fuck am I doing to do now?”

She shook when the lights around the rink were shut off.

Looking around she spotted the maintenance guy shrugging. “They told me everyone left, sorry.”

He turned them back on when he saw Caitlin’s eyes shoot daggers his way. She rubbed her eyes, feeling the ridges of puffiness under her lids. She had forgotten if she had any make up on but it didn’t matter, she didn’t care how she looked.

She turned her bud around and threw it on the ground, stomping it out with the sharp end of her toe pick.

It was then she realized for the first time of her life she was scared it won’t get any better from here. She took off her skates voraciously and stood up, only to fall down on her ankle again. The pain came back and before she knew it, she let out a yelp as if anyone would hear her cry out.

“How’s my golden boy?” Barry Allen’s dad asked his son, a couple of days after their last conversation.

“Fine dad, how’s everything back home? Any updates?”

“Oh I’m sure there will be time to tell all those stories when you come back from winning the championships. Your mother can’t wait.”

“I’m sure,” Barry smiled, thinking of his mom’s face the moment he came back from his busy life. “I miss her, how is she?”

Barry checked the calendar for his schedule, tensing his eyes at the amount of training he’d be doing for the championships.

“Well I’m gonna see you guys really soon. I’ll be on TV before you know it.”

“That’s my boy. Take some time for yourself though, I know how tough it can get there on the ice.”

“Yeah, I know.” He checked the time and winced, “Hey dad, sorry to cut this one short I gotta go. I gotta run some errands then I’ll do some workout training on my off time.”

With that he hung up, puffing his cheeks out from all the sentiment he felt speaking with his parents. He looked at his itinerary and realized he had an hour to kill before getting started. Knowing him, he would probably jump into it, but he wanted to take a breather.

Barry plopped himself on the couch of his new apartment that he recently bought during the recess of the hockey game season. For the first time he breathed a contented sigh that permeated throughout his body. Things were going well for him, for the first time in his life. He grabbed the remote control and turned on a random channel. During this time of day the soap operas were on so he opted for the many movie channels that had the recent releases. When there was nothing good on, he gave up on that too.

Randomly he went through his phone, scrolling at the various phone numbers listed, some he hadn’t bothered to use in months. He lost count of how many names he saw and threw his phone down on the cushions. Too many people needed him and he only needed his family and coach. He knew fame was an ugly monster but he had to deal with it as long as he played hockey to the best of his ability.

But right now, he didn’t want to think about hockey, as much as he loved it, it was too much of a good thing. He wanted to be anonymous, for as long as he could. Going out was an option but he was too lazy, unless he needed a good reason to.

His phone rang again, he wanted to avoid it but it could be important. The better half of him won as he grabbed it up.

“Yeah? No way, right now? Oh man, I’m a little busy. I don’t know just—what? No, I’m enjoying my break now. I haven’t since years ago. Alright, I’ll get back to you. OK, bye.” Barry hung up the phone without hearing a bye on the other end.

Turned out some people cannot live without him. If he was going to remain completely anonymous then he would have to try harder. By turning off his phone for one and going to chill at his favorite diner in the countryside. Nobody cared who you were there.

He grabbed his jacket and wallet and didn’t look back, not even at the blank screen of his phone sitting on his couch.

Liv : This author is a new favorite of mine by far! The writing and plot were excellent. Any less than five stars would not be right for this story.

Melissa Laymon: This was a fun book to read. It's the written story I have read in awhile. Thank you

World of: This was a amazing story, I loved the character development.💕💕

kelleybarnett1963: Absolutely love these books. Can't wait to read the next one.

swankyhel: Loving all this series