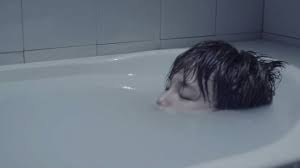 The sound of the machine beeping momentarily counts second the line continues to rise and fall and the only thing that could determine fighting spirit. Hanseok waited until he loses water from his bottle that may cause dehydration. After hours and the counted day and nights. He couldn’t stop caring for his hyung.

As if his hyung is his only family, where his life depends on him too. He sat beside his hyung’s hospital bed, with his elbow rested on the edge of the bed, balancing the weight of his head. His eyes wore off as he tried to blink away his tiredness. After days of changing schedules with Jeongin and So-jung’s mom, Hanseok got tired and weary. Hanseok begun talking his eyes glued to his hyung’s pale and limp body.

“What comes into your mind? Why would you try to kill yourself hyung?” the young one asked, his arm soon got weary and felt like jelly from the heavy weight, he leans in to get a closer look of his hyung reaching for So-jung’s excess brown hair that blocked So-jung’s lovely face. Hanseok look deeply as his eyes started to close. Hanseok and So-jung sleep serenely while Hanseok’s face is mere inches apart from So-jung’s. It was peaceful and the cold night lingers into the homes, the big round light that we called the moon hangs up the sky lonely and alone in the night sky.

The night goes thoroughly without anything bothering Hanseok and So-jung’s peaceful sleep. The morning wakes the birds and cicadas that started illuminating the peaceful surroundings. In a hint of the sun rise hitting Hanseok’s eyes waking him awake from his deep sleep, as he opened his eyes his breath hitched as his face is close to his hyung’s pale lips.

He diverted upwards rubbing the sleep from his eyes as he stretched his body, he could feel all the back pain and his legs hurt from the coldness and it feels like it has been sprained. As he tried to move his leg the pins and needles started to attack his leg from the inside.

“Ugh. That hurts. Please go away.” He started to stomp his feet on the tiled floor minimizing the pain at it drew away. He sighed in relief as he leaned back to a backless chair falling back from the chair and making a loud thud. He grunts from the pain as he sat from his ass, he saw So-jung staring at him in a confused and worried expression.

Hanseok quickly got to his feet in realization that his hyung has awaken. A smile form on his face looking at his conscious hyung across the room. “What happened to you?” So-jung asked reaching for Hanseok. His dongsaeng jolted to his hyung. “Yeah, Hyung perfectly fine.” Hanseok replied with a grumpy smile while his smile hides all the pain that he felt from falling from his ass. “Good. Anyways, where am I?” So-jung murmured in a hardly horrific voice. taking in his surroundings.

“You’re in the hospital, obviously.” Hanseok responded staring at his hyung as So-jung glanced from left to right. “Why am I here?” So-jung protests, his voice cracked. Hanseok diverted his look at his hyung in a concerned look on his face. “You don’t remember?” Hanseok asked. “I remember looking upon the horizon.” So-jung respond with his hoarsely voice. “Hyung, please don’t do it again. You got everyone shocked and scared.” Hanseok begged with a shaky voice. “Why wouldn’t I?” So-jung’s harsh voice made Hanseok breakdown into tears. His hyung can’t do anything but watch his dongsaeng cried.

After they had that conversation, soon after So-jung was released from the hospital. After two weeks, had passed everyone gave So-jung attention. And So-jing felt happy feeling wanted and loved.

This feeling that he had felt when Chin-hae was with him, unfortunately Chin-hae left So-jung leaving him depressed and unwanted. The day he left leave scars, only a mask could cover it up for me. So-jung always say that to himself, every time he felt down. He wanted a normal life... but his only fate is to die in his own pain and despair.

But from this day, that won’t happen... “I’ll try.” So-jung muttered to himself taking the last bite on his food, he looked around him, it made him smile...seeing his mother smile, everyone is happy, happy faces with painful stories, laughs behind the crying self, jokes under those painful words...everyone is always faking, lying to each other...than facing the truth, and caring for one’s self. So-jung smile behind his painful past.

He laughs for the people caring for him. He wanted this day would never end like his nightmares. Momentarily a voice invaded his clouded thoughts.

“Hyung” Jeongin softly tapped his hyung’s shoulder. “Are you done with your food?” His dongsaeng asked, So-jung shrugged his shoulders. “I’ll wash the dishes.” So-jung offered standing up and started gathering the plates.

“Hyung. It’s okay. I can do it.” Jeongin insisted. “I’m fine. Jeongin.” So-jung asserted. Placing the dishes down the sink. “At least let me help you.” Jeongin said not wanting his hyung struggle. “Fine, I just wanted to help out chores, you always do the chores.” His hyung said running the tap add washing the plates himself. “Hyung, people in this house cared for you, you know that right?” Jeongin muttered placing the plates to their rightful place. He glanced at his hyung.

“I know that. It’s just you don’t know what I feel.” So-jung turned to face his dongsaeng. “Right.” Jeongin left speechless. “Thank you for caring.” So-jung hugged his dongsaeng, pouring his tears to the one’s he could trust. “You can always open up to me hyung.” Jeongin patted his hyung’s back.

So-jung silently sat at the pavement, staring at the horizon yearning for love and forgiveness. “Didn’t you love me? Doesn’t it hurt when you left? Will you ever come back?” He muttered under his breath, taking a long sigh before he stood up and started walking to the pavilion as the ocean water touched the rocks softly while So-jung sang a soft melody, a melody that Chin-hae wrote for him. “Hyung!” So-jung turned to face his dongsaeng.

“You’ll catch cold. Here, wear this.” Hanseok wrapped a soft caramel scarf around So-jung’s neck as he warms himself up. “Thanks” the older one patted the young one’s head. “Hyung, can I join? You seem to do this every day, at least tell me why.” Hanseok asked lifting his from the pavement hovering himself up as he tried to balance himself from the steep concrete slab.

“It calms my mind, helps me concentrate and remember the remaining happy memories, and it also helps me from thinking of any other way to end all this.” His hyung spread his arms as the young one mimics along. Hanseok never felt comfort from this level, and how the wind gashes between you, how the ocean smell it calms his mind, like what his hyung had said. Hanseok smiled.

“I like keeping it this way.” Hanseok murmured under his breath as he followed his hyung from the edge of the pavement. “Where everything is fine.” He muttered before he could run after So-jung he found himself staring dearly at So-jung who run happily. Since kids he never seen his hyung this happy, he could even run maybe just for a short time, after that Hanseok started chasing his hyung.

I wish to come back to the summer sea where we are all alone.