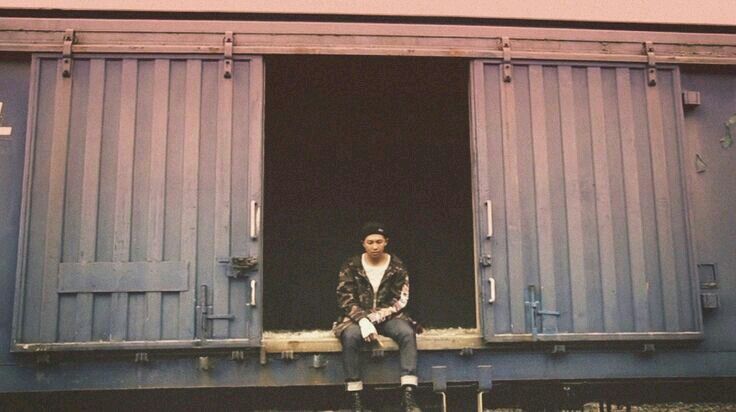 Yoon woke up early today, he said he’ll be needing to talk to his friend Joon and Chin-hae is left to make his breakfast before going into the bathroom. He ate his breakfast while he held one of So-jung’s letter. He kept it in case he might break down again, he needed the letter for his saneness. After he finished his food, he placed it on the sink, taking his lighter to his bathroom playing with the lighter in hand as he waited for the water to fill up the bathtub. He wasn’t thinking to do it again however, the way he is feeling today, he felt it again, and hoping to cope with the words written on the letter, as the words written on it would make him stay in sanity. As soon as the tub is filled, he sank in with his white shirt, that shirt has been So-jung’s favorite and became so important to him too. And soaking it in the water for comfort and to finally let go, however soaking the scent and everything in it gives sadness to his flaring past. To keep his sanity, he had to read the words written on the letter repeatedly. Looking back from all his memories and bad deeds, it doesn’t make him feel good, reading the words in his mind. ‘I’m proud of you, don’t attempt suicide again, it hurts the people that loves you.’ Those words, his voice, his innocent and pure eyes looking back at Chin-hae. He remembers every bit of So-jung and soaking the shirt that So-jung always wear, and washing the remains of So-jung’s memory is the start, Chin-hae is starting to let go of the past and burning the silly letter is the second step of letting go... so he has no longer connection. Chin-hae grabs his lighter reading the words once again before he lit the paper into ashes. “I’m sorry, I love you, forgive me.” Chin-hae held up the paper as the fire devoured the paper into dust of ashes, he waited for it to eat up the whole paper before setting it down on the wet tiled floor. He stared at his hands shivering from the cold water his lips quiver as tears begun to pour out of his eyes, he waited for something to happen as he sat there silently taking himself in the water where he could see the shallow water just between his eyes and nose, shutting his eyes as held in his breathing under the freezing water. ‘Please stay alive for me’ in the middle of him taking his life he heard So-jung begging for Chin-hae’s life. Chin-hae held out for any support as he pulled himself out of the tub. “Please....save me... save the me who’s being punished!” He pleads cussing as he whimpered at the tub. “Ughh! Ssibal!” Chin-hae threw his arms splashing the water out the tub.

After an hour or less, he takes himself out shivering on the cold tiled floor as the tap continues to flow down the tub behind him. Yoon returned home to witness Chin-hae on the floor curled up in to a ball as he shivers down. “What happened?” Yoon asked getting a spare clean towel for Chin-hae wrapping it around the poor boy. “I should’ve stayed here.” Yoon swore carrying Chin-hae to his bed before he settles Chin-hae to his bed Yoon whispered something to Chin-hae. “Don’t let go of my hand forever... I won’t let go of you again either.” He placed a soft kiss on Chin-hae’s forehead in act of concern and love before he could settle Chin-hae down. Yoon stayed by Chin-hae’s side falling asleep together, Yoon wrapped his arms around Chin-hae’s waist as he snuggles into his love’s scent. “Please love me back.” Yoon whispered his eyes swollen from all the crying and now his still pouring his sadness towards Chin-hae’s limp body next to him. “I love you...” Yoon’s voice shake from all the crying his heart got weaker when Chin-hae shift to face Yoon, his eyes close, Yoon wrapped himself under Chin-hae’s touch as they both sleep peacefully. After sleeping for an hour Chin-hae woke up without Yoon beside him. “Maybe he’s cooking lunch.” Chin-hae muttered under his breath crawling out their bed Chin-hae glanced at the bathroom, Yoon would never leaves the bathroom lights on cause he’s conscious about the electricity bills. However, Chin-hae grew more curious when the tap inside the bathroom is running viciously. He slowly walks towards the bathroom in horror he found Yoon laying on the floor unconscious. Reminiscent of Yoon’s past records Chin-hae forgot that Yoon had asthma, he rushes in the bathroom to check on Yoon’s pulse, thankfully he’s still alive. Chin-hae dragged Yoon to their bedroom as he tried to calm himself trying to find ways to get help. He took Yoon’s phone and one number that Yoon had recently been calling is Joonie, dialing Joon for help.

“This is Chin-hae. I-I need your help- please- call an ambulance?”

Chin-hae held Yoon’s head up his lap stroking his pale face tears streaming down his eyes continuously. “Please don’t leave me.” Chin-hae stammered staring deeply in Yoon’s unconscious state. Chin-hae pursed his lips holding off his tears, he stayed on his position as ten minutes had passed, hearing Joon’s footsteps in the porch, soon the door clicked open. “We’ll bring him to the hospital.” Joon approached the two, carry Yoon while Chin-hae followed behind as they approached the car. Joonie started the engine and drove to the nearest hospital where they usually come and go. After two days in the hospital, Yoon stayed silent since he doesn’t want to talk to Chin-hae. After a couple of hours, Yoon was finally released from the hospital. Joonie suggested that Yoon should have a fresh air in the beach, the two agreed. Momentarily, Joonie had to drive them both to the shore where there are tents that sells soju nearby. They had to walk to the nearest shore where Yoon scolded Joonie not to give Chin-hae some soju. Unfortunately, in the worst-case scenario, So-jung and Hanseok left to buy a few meats and they had to leap from shore to shore to have less time. To take So-jung’s attention, Hanseok started pointing at things that aren’t what they’re really called. “Hyung! Look at those geese!” Hanseok exclaimed shocking mostly of the costumers while pointing at the chickens. So-jung looked around in second-hand embarrassment, taking Hanseok’s hand in a short period escaping that embarrassment at the edge of his sight he spotted that Yoon guy and that Joonie guy between them is a short guy with blonde mopped hair. He stopped in his tracks, staring from across the crowd. “Hyung, what’s wrong?” Hanseok asked. So-jung stayed silent eyeing Chin-hae from afar. “Oh! Look at those pigeons!” Hanseok grabbed So-jung’s arms as they both got closer to Chin-hae, his heart flutters as their eyes met. To his surprise, Chin-hae didn’t even flinch and continued walking. “He’s not wearing his glasses.” So-jung muttered as he got dragged further by Hanseok. I missed him, So-jung thought, as Hanseok tapped his hyung’s shoulder. “You’ve been quiet all this time, hyung. Is something bothering you?” the young one asked, curious of what might be invading his hyung’s thought. “Nothing, I just saw someone familiar.” So-jung responded.