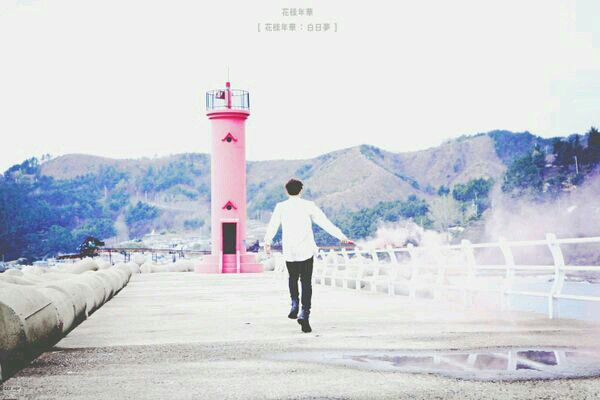 Chin-hae swallowed an imaginary lump on his throat as it forms unstoppable as he let his gaze wonders in curiosity So-jung? Chin-hae, thought as he rubbed his blurry eyes upon seeing nothingness around, he could see from his peripheral vision Yoon’s mint green hair while forcefully squinting his eyes glaring from right to left, hoping to see a glimpse of So-jung’s features from afar.

Unfortunately, Chin-hae asked Yoon. “H-how do you know him?” Chin-hae stammered in complete confusion trying to utter a word, Yoon on the other hand looking down at Chin-hae’s fragile form.

“I told you he helped me.” Yoon replied with agitated irritation as he scratches the back of his head in frustration. “Anyone could have helped you.” Chin-hae mouthed his teeth greeted while his hot breath touch Yoon’s bare skin. “He said only a few knew this place. What if no one helped me? Then I won’t be able to find you here. You know I care for you.” Yoon’s eye pleads with concern hoping Chin-hae would see it in him. He reaches for his love’s hair brushing it before pulling Chin-hae to a hug.

So-jung? Why would he help Yoon? And how did Yoon found So-jung in the first place?

Chin-hae’s mind is filled with his uncontrollable thoughts, he forced to close his eyes letting a deep sigh escape his mouth.

Yoon interrupt him with a question. “Chin-hae, do you want to go home?” Yoon asked the small one pulling away from Chin-hae’s touch as he cupped the small one’s face. “Okay.” Chin-hae’s response was dull and solemnly full of sadness and despair as Yoon took it as a yes, nodding as pushed himself up as he regains his balance from the weariness.

“Can you walk?” Yoon asked with concern. Chin-hae nodded in response. Yoon pulled Chin-hae up as they both walk to the exit, Chin-hae took a last glance at the room over his shoulders before stepping out of the place. In the most unexpected circumstances, there So-jung leaning on the wall obviously waiting for the two to come out, his head tilted upwards thinking thoroughly to the day afterwards.

Chin-hae stopped on his tracks once he saw So-jung before him. I never thought my heart would flutter again. Chin-hae blinked twice as he shakes his head furiously. Am I hallucinating? Chin-hae rubbed his eyes once again as phosphenes (a/n phosphenes meaning: (n.) The colors of “stars” you see when you rub your eyes) appeared in Chin-hae’s sight blocking his sense of seeing while his head started to ache.

“Chin, you okay?” Yoon’s faint voice interrupted Chin-hae’s thoughts before darkness started to illuminating his surroundings. The small one fainted unexpectedly, landing on Yoon’s arms. So-jung was shocked from his place while Yoon shake Chin-hae awake, one of So-jung’s experience with losing consciousness, So-jung crouch down beside Chin-hae, checking the blonde boy’s pulse So-jung spoke.

“He’s still breathing and going to the hospital on foot right now won’t help.” said So-jung as he explained furthermore.

“Do you really think it’s a good idea, hyung?” Jeongin asked from behind So-jung while the younger one clenched onto So-jung’s shirt like a five-year-old kid. “They’ll be staying here for the night, you sleep with me in my room.” So-jung muttered as they approach the house. Jeongin followed behind hiding behind his hyung as they arrived at the front door.

“Do you think your mom would like this idea of yours?” Jeongin hides crouching down as the door opens. “Firstly, this is not my idea okay this is unexpected. Secondly, the hospital is far away from here.” So-jung replied. “And the third reason?” Jeongin asked peeking from his hyung’s back as So-jung’s mother came out.

“I’m worried about them.” So-jung replied. After a small argument occurred on So-jung’s family, So-jung’s mother couldn’t do anything but to let the two individuals stay for the night. “Young man, have you eaten yet?” So-jung’s mom asked Yoon who sat at the living room his head down probably worried about Chin-hae’s condition. Yoon smiled and answered. “Not yet, Mrs. Kim.” Yoon replied standing up to bow at Mrs. Kim, So-jung’s mom, while on the other end of the dining table, So-jung shoves his food in his mouth. Hanseok glances at his hyung occasionally.

“Yah hyung~” Hanseok sang waving his hand in front of his hyung’s sight.

“Are you okay hyung?” Hanseok asked once his hyung turned to look at him.

“I’m fine. Now continue eating.” So-jung ordered as he glared at the guy sitting beside Hanseok. “Here hyung.” Jihoon handed the rice to Yoon. “Thanks.” Yoon bowed as he takes the rice from Jihoon’s grasp. The rest of the dinner was not friendly as it filled with silence and awkward gestures.

Until Hanseok breaks the silence out of blue.

“Hyung how did you meet?” Hansol asked dumbfounded, So-jung glared at him, obviously Hansol avoided the sight of his hyung giving him a death glare. Yoon sat straight and cleared his throat awkwardly. “Uh. I’ve been Chin-hae’s friend for a long time. His parents asked me a favor to take care of Chin-hae.” Yoon respond smiling forcefully at them.

“Oh. How come I never saw you here before?” Hansol asked taking a sip of his water. While Jeongin is obviously giving signals at Hansol to stop asking. “Uh-” Yoon got interrupted by So-jung standing up taking his dish at the sink as he walked in his room.

“Excuse me.” Hanseok excused himself as he put his plate on the sink as he entered on So-jung’s room. “Hyung?” Hanseok whispered as he entered in his hyung’s dark room, he tried to grab the light switch on the walls. As soon as he opened the light, he spotted his hyung’s brown hair on the edge of his bed. As Hanseok approached his hyung he heard a faint sound a faint light on his hyung’s cellphone.

His hyung wore his earphones, listening to music, his head resting on the mattress while both of his eyes are closed. Hanseok sat beside his hyung while they both enjoyed the silence. As the night went by, the rest had already slept. Unfortunately, Yoon and Jihoon had some fun times drinking coffee outside while sitting on the porch with blankets over their shoulders.

“Hyung, what happened to your friend Chin-hae?” Jihoon asked in a serious tone. “He fainted as if he was trying to wake himself up.” Yoon replied leaning on the wooden post next to him as the wooden floor boards clicked. “Why does So-jung seems isolated?” Yoon asked in curiosity, Jihoon turned to face the older one. “Mrs. Kim never mentioned. But I noticed it when we were young, his mother never lets him to play and run around.” Jihoon said sitting comfortably on the wooden floor.

“And why is that? Do you have a theory?” Yoon asked his voice filled with confusion as he leaned in, interested, at the said isolation. “When we were on a road trip, he used to bring this little machine with breathing apparatus with it. I never saw him used that thing, but it seems pretty important.” Said Jihoon doesn’t even care to tell information to the stranger. “Yeah, anyways do you know where’s they sell the best soju around here?” Yoon asked changing the said topic.

Occasionally, Jihoon’s eyes lit up with happiness. “I’ll show you where!” Jihoon whisper-yelled as the two left without permission. So-jung sat silently on the floor he’s no longer had the earphones plucked in his ears. He could see the shadow of the two-reckless individuals leaving his property. It gives So-jung an opportunity to check on Chin-hae.

“Hyung?” Hanseok woke from the sound of the door clicking as it was closed behind So-jung. Hanseok stayed on the bed as he slept silently, unbothered.

On the other hand, So-jung walks towards the other room, twisting the door knob as it clicks open, So-jung peeks in to see Chin-hae laid on the bed uncomfortably. The tall one entered the room, his eyes fixed on Chin-hae’s thin form before him. As he was about to take another step the lamp flicks open releaving Chin-hae’s confused look as he stares at So-jung’s silhouette.

“Yoon?” Chin-hae muttered, he rubbed his eyes as it widens in shock.

“S-So-jung?” Chin-hae’s mouth agape. But soon recovered, the tall one approached him.

“Why are you here?” Chin-hae asked sitting up to reach So-jung’s eye level. “I should ask you that first.” So-jung respond sitting at the edge of the bed, Chin-hae, sigh. “Yoon just got released from the hospital earlier, Joon suggested this place in the most cleanest air around Busan.” Chin-hae traced the bed sheets crumpled part.

While So-jung reached to touch the small one’s hand. “No So-jung, we’re ill-fated in many ways.” Chin-hae pulled back his hands looking down at his hands as his cheeks started to burn as So-jung stood leaving, just before So-jung could open the door, Yoon came in with Jihoon supporting him.