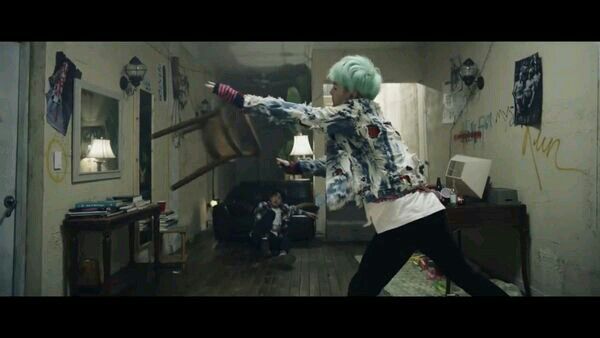 As So-jung was about to leave, looking over his shoulders a smile appeared on his face and his eyes began to tear up, with a mix of sadness and rage.

Surprisingly, it’s also the time when the door clicks from the outside. Two enthusiastic voices chattering outside, mostly all grumpy and plummy in a very bad way, broke the silence building between Chin-hae and So-jung. Interrupting their shameless memory moment. Once So-jung realizes it’s Yoon and Jihoon whom opens the door, I guess it’s time for me to leave, but where? So-jung thought.

Before it opens, an odd tone left Yoon’s mouth and filled the blonde one’s ear. Chin-hae started panicking in his place, his pupils shaking from nervousness as his breathing got heavier in the thought that Yoon might start a fight.

But before Yoon could enter, Chin-hae had already have something in mind, with heavy breathing, he still managed to briefly tell that So-jung must hide. However, his voice was too low, that even panicked So-jung can’t hear.

“H-hide!” Chin-hae whisper-yelled his voice wobbly as if he’s afraid of something. So-jung turned to face Chin-hae hearing what the blonde one just said. He was confused at first, but soon gets it, the tall one dash in the closet effortless, just before Yoon entered tumbling forward from drunkenness.

Jihoon laughed but then left without a word. After tumbling on the ground, Yoon grunts, as he peeked from left to right, as soon as he caught the presence of the small one, pushing himself up with his forearm on the floor supporting his weak form.

As he hovered himself from the wooden floor beneath him, Chin-hae glance where So-jung hid. Afraid that Yoon might spot the black-haired guy hiding in the closet.

“Come here, sleep.” Chin hae pats the space on the bed. While on the back of his mind, he’s trying to control his racing heart. Yoon never told him that he loves him in person, however Chin-hae knew Yoon, just loves him as a friend.

As Yoon crawled in, while Chin-hae tucked Yoon in bed, Chin-hae stole glances at the closet, he could feel So-jung staring at them. Kinda creepy though.


“Chin” moaned Yoon. “Sleep, you’re drunk.” said Chin-hae whom wore a white sweatshirt, his thick (hella thicc) thighs enveloped Yoon’s. “No. You~” Yoon’s monotoned voice sang. “You didn’t get what I said earlier hiccup I love you Chin~” Yoon added with droopy and weary state while hiccupping every ten seconds.

Chin-hae stayed quiet while his heart is ass-loud. “There’s no point of talking to you right now, you won’t remember a thing after this.” Chin replied his voice cold and dry. “Dongsaeng.” Yoon called out voice low but clear. Chin-hae got confused. “Yoon never mentioned that he has a brother before.” Chin-hae wondered tapping his index finger on his chin recalling their memories.

Awful memories, not everything is awful... though. Reminiscent of our history together, it was fun times before anxiety attacks me, it started when I was young...young kids bully me for being fat. However, it drove away when Yoon came in my life, unfortunately not everything went smoothly between us.

That’s when I started cutting myself, drowning my sorrows, crying my weak ass and dealing with my anxiety. Amidst the sadness, I feel it every time I look at my reflection in the mirror. I used to have a habit of smashing every windows or things that reflects myself and use the shattered pieces to cut myself.

It was a bad habit, Yoon helped me getting rid of that bad habit of mine. Recalling the day Yoon found me in the bathtub in a pool of blood, I can see his worried and concerned state while his hands shivered from nervousness.

Most of my memories with him is fading like brume in the winter’s night. Unexpectedly, when Yoon and I came here, it’s like we’re fated to meet at the same day So-jung started dating me.

That day when Yoon tried to take me away from So-jung’s grasp, my heart shattered into a million pieces when Yoon cussed on So-jung before turning away with tears in his eyes. But before taking his first step, Yoon turn his heels asking So-jung a favor.

“Take care of him, his too fragile...and” Yoon paused his eyes diverted to mine. “Chin-hae you always have a spot in my heart. I know you choose him over me...but you’re always welcome to come back.” I shiver from his said words.

I, myself, am not sure what my feelings are. Chin-hae thought. Looking back at the closet, he wonders.

Chin-hae hanged his legs on the edge of the bed, in tip-toes he knocked at the closet door.

“So-jung!” He whisper-shouts behind the door as it creak opens, So-jung sat on the cold floor his back against the wall while his head down. Chin-hae reached for the black-haired guy before him. “Yah~ So-jung ah!” Chin once called out shaking the tall one.

This time So-jung flinched diverting his gaze on Chin-hae’s small form crouch down in front of him, a smile formed in his lips as he slowly crawled out the closet door. On So-jung’s half way out the closet, a deep voice interrupted the two individuals sneaking their way out.

“What the hell.” said Yoon fluttered and shocked at the same time. “Yoon, it’s not what it looks like.” So-jung remained silent as he listens to their raging argument.

“I’ve seen enough. I didn’t drink too much, Chin. And you’re taking advantage to spend your time with that asshole.” Yoon almost exclaimed referring to So-jung, keeping his voice low as he doesn’t want anyone to wake up and witness the intense drama they ever seen in their life.

“I-” the mint green haired guy interrupted the blonde one. “We need to talk. Privately.” Yoon said in a deep serious voice while So-jung silenced himself not wanting to get involved. Yoon glared at So-jung signaling So-jung to leave.

“I thought we talked about this.” Before So-jung could close the door behind him Yoon’s voice illuminate his ears. “I’ve caused too much trouble.” So-jung whispered to himself. Sliding his back against the wall as he silently chanted.

“It’s not your fault So-jung.” He repeated it while covering his ears, however he could still hear them both yelling at each other.

“I tried to keep myself sane! But after this...I don’t know Chin... this isn’t right! You left him, you came back to me...for what then? To accompany yourself? To make me suffer every time you think of killing yourself because of you regretting and blaming yourself! I don’t know what has gotten into you. You never seen my efforts! Is that what he told you to do? Ugh! Chin. I can’t deal with this...Let’s separate ways.” Yoon said his voice filled with rage as he stomped his feet on the wooden floor.

“Yoon! No! I need you.” Yoon turned his heels to face Chin-hae’s crying and fragile form. Walking his way back, he extends his arms while Chin-hae ran to his arms staining his shirt with Chin-hae’s sad tears.

“I-I’m sorry, I never meant to hurt you. I’m so sorry, Chin.” Yoon embraced the small one, holding Chin-hae to his chest as he sniffs the scent of Chin-hae’s sweet scent. Chin-hae sniffed tightening his grasp on Yoon’s waist.

“Just...stay away from him if you don’t want to get hurt again.” Yoon whispered to the small one’s ear.

Behind the door, So-jung sat there on the floor, tears flowing his face.

“I’m cursed.” So-jung murmured sniffing pushing himself up as he headed outside his house.

“There’s only one way to end this curse.” He muttered under his breath, hot breath escaping his parted lips.

His feet lead him to the pavement. The weather was cold, the sea breeze smells, the darkness implicit his emotions.

He breathes out hot breath. Looking back once as he spreads his arms.