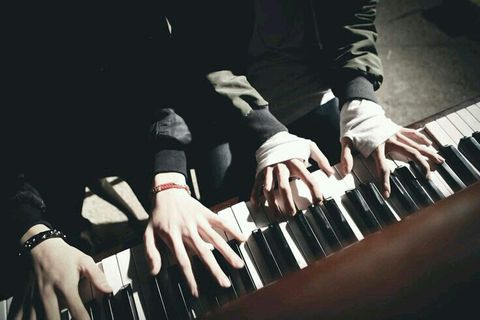 “Don’t come back here ever again.” The tall one spoke with rage in his eyes. Just before of letting go of Chin-hae’s arms, he glared at Yoon one last time, the mint green-haired guy nodded in reply while So-jung turned his heels as he diverted his longing eyes on Hanseok’s pure eyes, he felt his heart broke into million pieces when Hanseok flashed him a sad smile. And soon diverting his gaze to his family, his eyes blinked away the sorrow glaring at his family’s pitiful eyes, he lowered his gaze as he walks away with both eyes on the ground.

Face red, eyes puffed, tears momentarily flowing against his already stained cheeks. At this moment of parting, he could only hear his labored breathing, with his lips quivering, unable to breathe normally, his voice raspy probably dehydration.

His hand, unsteady, as well as his shaking knees. While he mumbled things under his breath. Never thought I’d do this again. Whilst none suspecting something, Hanseok with his occupied mind, Jeongin and his innocent mind, meanwhile Chin-hae has left hours ago.

So-jung sat across his room holding one of Chin-hae’s belongings. sniffing his sorrow as he endures the pain. Pain that has been inside him a long time ago, he wanted to be happy like other kids too, play with his friends, sleep overs and other fun stuffs too. And just because of his disorder, he’s been isolated from the reality, that when his adolescence reaches he has no knowledge about the harsh world.

Since he has been home schooled and unfortunately met Chin-hae just when he got to that hospital. He remembered everything Chin-hae had said, done and every memory of his love hurts him a lot more. Like the feeling of being hanged in someone else’s sand castle, unable to break free from the tight grip, one single move can end your life easily.

So-jung’s life was like that. One thing he wanted to do is to cure himself, yet in scientific terms, there’s no cure, just a prevention and to help him live just a little more. His ventilator that has been with him till then, giving him life and saving him too.

Like Chin-hae saved him from his depressed state. But So-jung was even more hurt when Yoon has to comeback and ruin everything. Unfortunately, So-jung didn’t really know why Chin-hae left him.

He was sure there’s more deeper meaning that Chin-hae has kept until now. But there is something So-jung has always asked himself.

“Why would Chin-hae leave him because of his disorder, when Chin-hae have known it for many years, and had endure it with him? What are the other reasons Chin-hae have left him for? Is there something to dig up? Does anyone of his family are involved? What are other reasons?” While So-jung grasps the thing on his hand, someone knock on his door, interrupting his thoughts.

“Hyung?” That voice, So-jung thought, butterflies started to form in his stomach like dandelion flowers erupting in his fragile form despite his confused feelings, there was still a hint of happiness lingering inside him, not noticing a smile forming on his face as he opened the door.

“Hanseok. What are you doing here?” So-jung asked his hand behind him holding Chin-hae’s photos. There’s always a hint of sadness in his voice, hoping Hanseok was Chin-hae.

He kept thinking about the things he did with Chin-hae, which leads to his voice to shake. He didn’t even notice Hanseok has embracing him. He was curious at first, but then hearing Hanseok’s voice is so comforting to So-jung. He braced the young one hearing himself sighed.

“I’m fine Hanseok.” he replied, tightening the grip as tears started to fall from his eyes.

“It’s okay to cry hyung, I’m here for you.” Hanseok’s soothing voice calmed the tall one’s breathing as his embrace loosen. “Thank you Hanseok.” So-jung replied. Wiping his tears while the young one handed him the photos of Chin-hae, he then looks into the young one’s broken smile.

“You shouldn’t have let him go hyung.” Hanseok’s voice cracked but he still managed to smile for his hyung. but this time, Hanseok’s heart broke with its scattered pieces along with his desperation to get So-jung’s attention, together with the thought of hopelessness, he accepts that his hyung needs Chin-hae more than him.

But hyung... I was never fine. Hanseok thought staring at his hyung’s shivering hands as he looks at Chin-hae’s photos.

“The way you reacted at his voice, smile, gestures, those little things that often people don’t notice... you notice all of them. While the me who’s craving for your attention... I love you hyung... please notice me.” Hanseok’s pleading voice rang silently in his ears. It was eerie.

A very piercing silence rang throughout the empty room. Hanseok had his knees close to his chest with his arms wrapped around them while he chanted So-jung’s name. “So-jung hyung.” Hanseok mumbled. Tearing one of Chin-hae’s photos.

“Hanseok? What are you doing?” Hanseok looked up there Jeongin standing at the door frame. “Uh. I was just-this is nothing. Don’t mind me.” Hanseok quickly kept the teared photo behind him while sweating nervously.

Jeongin crouched down in front of Hanseok handling an envelope that says ‘To Hanseok’.

“So-jung hyung left with his belongings, I wonder why.” Jeongin said. Eyeing Hanseok with his arms crossed over his chest.

“What did you do Hanseok?”

“Hanseok. You shouldn’t have said that. Do you know what Yoon hyung would do if he finds out hyung followed them?” Jeongin said disappointment and anger filled his voice. “Let’s just hope nothing goes wrong.” Jeongin spoke giving Hanseok one last look before standing up, leaving Hanseok in his room full of regrets.

“I shouldn’t have said that.” Hanseok chanted while Jeongin on the other side of the wall crying while he held an envelope that said