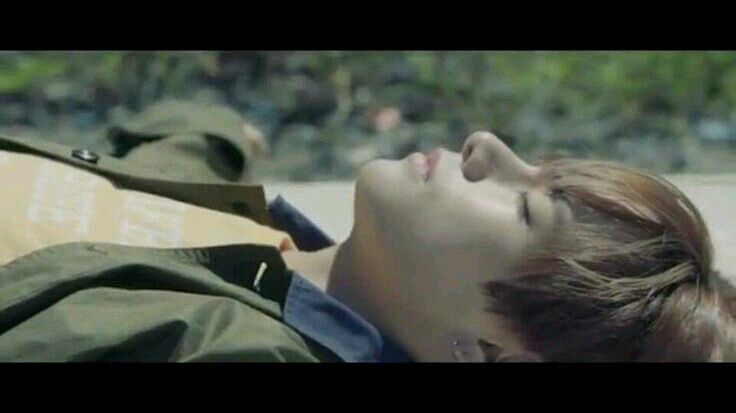 “Hyung!” The rest chorus at the background as So-jung dove in the ocean. He swam in as he reached his hands out, Hanseok had his eyes closed as he sank deep down the darkness of the ocean. So-jung swam deeper as he finally caught Hanseok’s hand as he rises with him. Unfortunately, after they have risen, everything turned to winter as he looked around he saw himself floating in the freezing water.

In a matter of seconds, he came back to his senses to meet the blue sky in front of him a distant voice calls for him as it got clearer, he found out it wasn’t his name that was being called, it was Hanseok’s name who lied beside him unconscious. So-jung lifts himself up without any support nor assistance as he dashes in and started doing CPR. “Hyung, what do we do now?” Jeongin asked. So-jung started pumping Hanseok’s chest counting to twelve as he gave air to Hanseok. “We didn’t know this would happen.” Jihoon spoke almost in tears. “Just shut up, this is all unexpected don’t blame yourselves.” So-jung said in between giving breaths.

Few moments later, Hanseok started to cough up ocean water from his lungs as he struggled breathing, he met a pair of pure innocent eyes that made his heart beat pace faster. “H-hyung?” Hanseok said a smile appeared on his face as he breathes in relief. “Yah! What are you smiling about? You almost died you ass!” Hansol exclaimed. The rest laughed as So-jung helped Hanseok on his feet as they started packing their things. “Where to?” Hansol asked as he hopped in the drivers sit. They hopped in the car and Hansol started driving to nowhere. However, So-jung remembered something unforgettable.

He remembered Chin-hae, attempting to kill himself. It hurts him seeing someone end their lives, especially Hanseok and the rest of his dongsaengs. He doesn’t want them to feel pain or unwanted, that’s why he gave all his attention to the younger ones. Making them feel safe and wanted. That feeling, So-jung had experienced when his father died, where no one was there to protect him, he felt unwanted by everyone, until his mother decided to take him home. And this time, he is going to make his dongsaeng’s happy even though he never felt the same. “Hyung, you’re dozing off while sitting, do you want to lay down? Here lay on my lap.” Jeongin offered patting his lap as So-jung laid vertically at the back of the pick-up truck.

Hanseok laid some comfortable blanket on So-jung as the older sleeps. Jeongin started talking. “Hyung saved you.” Jeongin begun, however Hanseok interrupts him. “No, he is still saving me.” Hanseok replied. “What does that mean?” Jeongin asked close to bursting out of laughter. “They say, you don’t drown by jumping in the water, you drown by staying there, and that’s what I did. I expect for you to leave me to drown, I wanted to die after all. But hyung... came for me, I didn’t expect it. I felt like I’m still drowning.” Hanseok said, Jeongin stayed silent for a while until he spoke. “Is that why hyung is still saving you?” Jeongin asked he seems to understand Hanseok’s situation as he had felt the same way too.

“Yah! But you’re here now. Breathing, and I’m proud of you.” Jeongin applaud Hanseok as he gave Hanseok a hug patting his back for comfort. “Yah! Don’t get so emotional out there!” Jihoon exclaimed from inside. “Yah! Where are we going anyways?” Jeongin exclaimed back from the loud wind on the background. “Home I guess?” Hansol spoke up concentrating on the road. “But, we’ll be stopping by a gas station, the fuel’s almost out.” The long road passed on as the sun started to go down.

After half an hour, they’ve stopped at the gas station where Joonie works. In an abrupt coincidence, a mint green haired guy started to cuss on Joonie as they approached the gas station. The guy threw his bottle, breaking it into pieces. It was an unexpected conflict where a drunkard started to mess everything up. So-jung tried to ease the tension, holding the drunkard down.

“Yah! Calm down!” He yelled at the mint green haired guy. “Chin-hae!” The guy exclaimed breaking from So-jung’s grip falling to the ground, crying. So-jung’s eyes widen as Jeongin came to him. “Hyung what’s wrong?” So-jung growled as he tackles the guy on the ground. “How do you know Chin-hae!?” So-jung yelled lifting his fist as the guy dodged it swiftly. “Fuck off!” The guy yelled. “Yoon! Stop this okay.” Joonie stood between So-jung and the guy. So-jung glared at the Yoon guy who does the same. “Should I be the one asking you that?” The Yoon guy said shooting me a death glare.

So-jung clenched his fist controlling his rage against this guy. At that time the tension was hot amongst the two. “Hyung, let’s go home.” Jeongin grips his hyung’s arms pulling him to the truck. Unexpectedly, So-jung shoved Jeongin’s arms as he glared at the guy. “I’ve known Chin-hae longer than you. Stay away from him.” So-jung shoved the guy, it caused more emotion when Yoon yelled the hurtful words which made So-jung broke into tears. “Hyung! What’s wrong?” Hanseok crouched down beside his hyung.

“How dare you!?” So-jung shouted pointing at the guy. “Guys, keep it down, the customers are looking at you.” Joonie tried to hold the guy as he tried to attack So-jung. “Yoon! Stop it! Go home now!” Joonie pushed Yoon away as the mint green haired guy left raising a middle finger at So-jung. “Hyung, we need to go home now.” Hanseok hugged So-jung on his arms as So-jung whimpered on the ground tears staining the concrete floor beneath. “Joonie, we’re really sorry for this commotion.” Jeongin apologized. “H-he shouldn’t say those things.” So-jung said in a low-adjective voice, tears streaming down his eyes. He never broke down like that before in front of someone except Chin-hae.