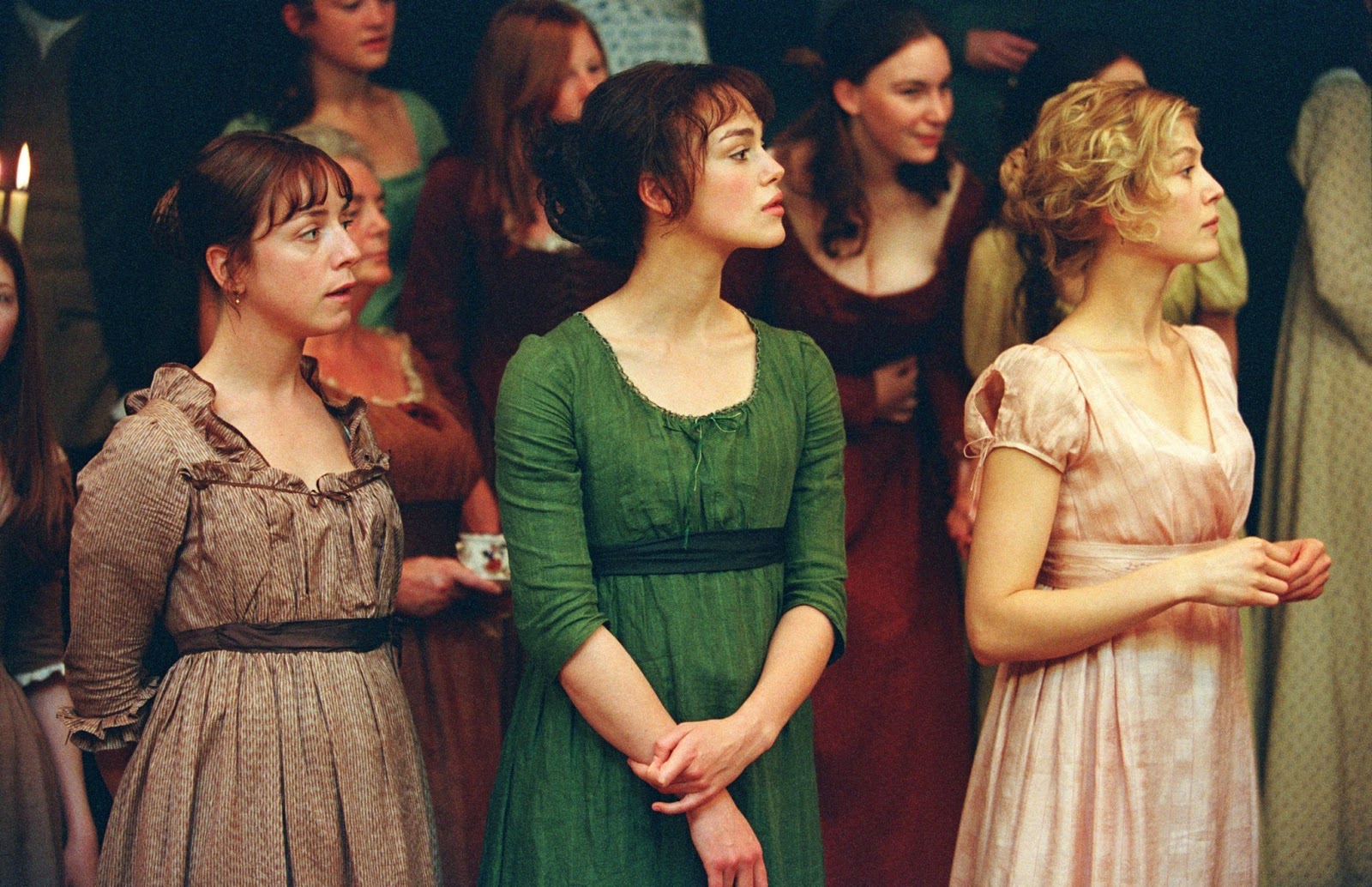 "To be fond of dancing was a certain step towards falling in love." - Jane Austen

Awkwardly, I tried to dance and managed to make myself into a bigger fool as Caroline Bingley gossiped behind her fan about my lack of dancing skill and my apparent lack of everything. I knew that I was not making any good impressions as I stepped on my partners' toes. I found myself glad that Mr. Darcy was not there. First impressions counted highly for him, and I could not help but feel that I would have failed him in every shape, way, and form. How many different ways could I fail Mr. Darcy? I could likely write an entire novel about that. Shall I consider some of the ways? Luckily, I did not have time to produce such a list of my failings. But, Caroline Bingley could have given anyone a play-by-play account.

On the way to the punch bowl, I overheard Caroline Bingley gossiping to anyone that was willing to listen. "I believe Miss Elizabeth Bennet is not an accomplished woman. She has several failings that even I am ashamed to admit for fear of ruining her chances."

"Did you see her pitiful attempt at the quadrille?" Her acquaintance smirked as she held her fan to her face to block her lips from being read. I called this person acquaintance because I did not think Caroline had any real friends.

Caroline laughed haughtily, "To call it a weak attempt is as polite as one can get."

Another acquaintance chided, "Come now, Caroline since when is politeness your forte."

Caroline narrowed her eyes at the woman, "I merely speak the truth. If you had seen her dance," Caroline nodded to her first acquaintance, "then you would have formed an entirely different opinion about her."

"And," the second acquaintance simpered, "since when are first impressions infallible to the character of an individual?"

The second acquaintance turned around to see me right behind them. She smiled at me and looked back at Caroline, "I believe you now have the opportunity."

Caroline's forehead creased, "What opportunity are you discussing?"

The acquaintance motioned her hand towards me, "To tell Miss Elizabeth what you think of her."

Her face went pale as she turned around to face me. We stared at one another. I am sure Caroline was wondering if I was going to say something. If she were in my world, I would have told her who's the boss! Still, she looked embarrassed, and that was solace enough for the time being. She bowed, and I bowed in kind then she walked away as fast as she could manage. As per usual, her acquaintances started to gossip about her. I continued my walk to the refreshment table and saw that Jane and Mr. Bingley were dancing together. I smiled to myself. Finally, something was going right. I walked towards them as the song ended.

"How light on your feet you are, Mr. Bingley!" I commented on his dancing skills.

"Oh, I promise you," I admitted, "my attempt at the quadrille is excessively clumsy."

Mr. Bingley smiled sheepishly, "It could have been far worse."

Bingley smiled down at Jane and for a moment they forget that I was still there. They truly are in love; I thought to myself. After two dances, I could venture to say that Bingley might very well monopolize Jane's dance card or perhaps the rest of her life. I could rejoice that despite having me in the story, these two were still able to find one another. Here's hoping the story works itself out!

I cleared my throat to get the attention of the lovebirds. "Caroline had a few choice words to say about my dancing ability."

Bingley sighed, "I am sorry to discover this."

"I know," Bingley considerately remarked, "but my relation to her has me seeking your clemency."

"Not kind," he laughed, "I am only seeking your forgiveness for her misgivings."

"Well then, you are forgiven Mr. Bingley."

The rest of the ball went by without any troubles. When the ball ended, Mr. Bingley felt disappointed that it had shut down so early and suggested throwing one at Netherfield. He had proven himself as an affable man and everyone desired to know him. People gossiped and talked about Bingley as though he was chattel to be sold to the highest bidder. He had become, in one night, the sworn property of all the mothers with eligible daughters. Matrimony was an ugly business and so far, the business had become his suitability and his five thousand pounds a year. At the helm of this business plan was none other than Mrs. Bennet. In her mind, his attention to Jane trumped everything and because of this detail, she felt that Mr. Bingley was owned by her family and her family alone.

As soon as we got out of the carriage, I emitted a sigh of relief. Lydia talked the whole ride about regiments this and regiments that. None of us could get a word in edgewise. I wished I could tell her that it was best to stay far away from soldiers. But, I could not influence her. Jane Austen wrote the novel a certain way, and I had to follow the script.

Mr. Bennet was still up reading a book. However, I think he stayed up to hear the events of the evening. I think he was hoping to find Mrs. Bennet dejected with the idea of Bingley. He was hoping to find her irritated. Boy was he mistaken. Everyone was buzzing with delight, especially Mrs. Bennet, who told him every detail of the party and every nuance of every guest as though he cared! He finally had to tell her to stop and so she chose a new topic - the weather.

Jane and I walked upstairs to our shared room. We tried to sleep but could not, as we were too excited. That blissful feeling of anticipating an epic event had washed over this entire family. I was starting to feel the same way myself.

"Elizabeth, do you know him?" Jane inquired, "How?"

I wished I could tell her how intimately I knew everyone in the house and town. But, how could I? I was Elizabeth Bennet, so it seemed and I had no way to get back. I should probably see if any of the mirrors in the house work. Only, I didn't desire to leave until I met Mr. Darcy. Did that make me sad and pathetic?

"I have read about him."

"What did they say?" Jane inquired, "Why did you not show me the letters?"

"For one thing," I laughed nervously as I avoided her last question, "he's never been sick!" Then, I tried my best to justify my statement with a little white lie, "When everyone in Pemberley had a cold; he developed a slight headache."

Jane sighed and said, "Mr. Bingley is exactly what a young man ought to be. Levelheaded, good-natured, spirited and he is so cheerful! I have never met anyone as cheerful as he!"

"You forgot handsome!" I laughed.

"Oh, Lizzy," Jane stared at the ceiling; an idyllic grin on her features, "he asked me to dance twice. I was so shocked and flattered. I did not anticipate it."

"Why not?" I remarked, "You were the prettiest girl at the ball. He is pleasant, I'll grant you that." I grinned and said one of my favorite lines from the book, "You have liked many a stupider person."

"You see the good in everyone, Jane. You never speak badly about anyone."

"I do not wish to make a rushed criticism of anybody. But, I do say what I think."

"That makes you the wonder. You really do take the good, make it better, and say nothing about the bad. What about Bingley's sister? Her manners are most decidedly not equal to his."

"I'm certain there is good in her. Everyone has some good in their heart."

I smiled, wishing that I could tell Jane not to worry and that she would end up with him. However, I hardly knew if the story would be different from what I had read and the end all be all was throwing me into the equation.

"Do you think he will propose?"

I placed a comforting hand upon Jane's shoulder, "It is too soon to tell."

Jane smiled with the glow of a woman that was already in love.