Taebae🐯 would love your feedback! Got a few minutes to write a review?
Write a Review

I turn my body on my side, feeling something silky and soft underneath me. I also feel something next to me, believing that it was a pillow, I wrap my arms and legs around it. Warmth and comfort immediately surround me as I felt an a pair of arms wrap around me, one on my back and the other on the back of my head, stroking it.

′ So warm’ I thought to myself, wanting to never leave this warmth, I wiggle my head closer to it afraid that if I don’t, it would disappear.

“Y/n that tickles” I hear someone speak out of no where and I quickly move my head away to look at the owner of the voice. My eyes widen seeing him so close to me, then it hit me that it wasn’t a pillow that I was cuddling with, it was....

“T-taehyung” I stutter out his name in shock and then quickly moving away from him, practically jumping towards the other side of the bed. He slowly sits up, rubbing his hair and yawning.

“Sleep well?” He asks me now making eye contact with me while starching his stomach under his shirt still half asleep.

“What are we doing the same bed together?” I asked him, continuing to look at him in confusion.

“Well isn’t it obvious that we slept together?” He said like it was something normal between us

“W-WHAT?!” I yell standing up but soon lose my balance since my vision blurs for a moment due to my sudden movements. I close my eyes waiting for the impact of me falling onto the floor hard but it never came so I open my eyes only to come to face to face with a worried Taehyung.

“Are you all right?” He asks me while looking into my eyes but I didn’t reply back to him since I was stuck looking into his eyes and then his nose, his lips....well all of his facial features. I can’t help but stare at him (A/N: I MEAN come on it is KIM TAEHUNG!)

“Y/n?” He calls out making me snap back to reality as he seats me back onto the bed. I shake my head side to side trying to maintain my composure.

“No? Are you hurt anywhere?”

“OH! No I’m fine don’t worry!” I quickly reply back to him waving my hands in the air and also shaking my head back and forth as well

‘Why am I suddenly feeling a giddy?’

I look down trying to hide my blushing face, not noticing that Taehyung was smiling the whole time while watching me

‘A-anyway you going to answer my question?’

I ask him trying to change the subject, looking up at him, hoping that I was no longer blushing

Taeyhung fakes coughs and then starches the back of his neck, avoiding eye contact with me. “Well.....”

“Well what?” I raise an eyebrow at him waiting for an answer but he just stays silent.

A few minutes pass or what felt like a few minutes and I was just getting impatient which is unusual but I felt that I needed an answer. So I grab the collar of his shirt and pull my close to my face making him gulp and say to him in a demanding tone.

He sighs and removes my hand from his collar and sits back into his original position on the bed “What's the last thing you remember?”

“What?” Taehyung gave me a look saying “are you serious?”

“Well....okay” He clears his throat “wait....was that's seriously the last thing you remember?”

Taehyung looked at me in disbelief and then shakes his head “Ok, why do I get the feeling that your just messing with me right now”

I giggle “dang it, I was hoping you wouldn’t notice”

He looked up at me and smiled at me once more seeing my giggling and my silliness. But then his expression became serious

“Y/n” He called my name in a really deep voice that it startled me a bit since I’ve never heard his voice so deep before.

I stop giggling and look at him, noticing his serious expression “What's wrong?” I ask him feeling a nervous for some reason

“Answer me” He cuts me off with a stern voice

“I was taking a short cut on my home which happened to right in front of the forest and then a red looking wolf appeared, we stared at each other for a little bit and then the wolf chased me into the forest. I trip while running and the wolf was about to attack me but-” I pause thinking back to the memory of the black wolf coming to save me

“But?” Taehyung asks noticing that my facial expression, my eyebrows furrowed in confusion, I look at him “but nothing, you would think I’m weird” I said looking down and playing with my hands on my lap since I was sitting on the bed cross leg

‘Why do I feel like I need to obey him?’ I thought to myself while looking at him

“I would never think your weird or anything of it, if anything you haven’t seen how weird I could possibly get” He said then made a goofy face which made me laugh 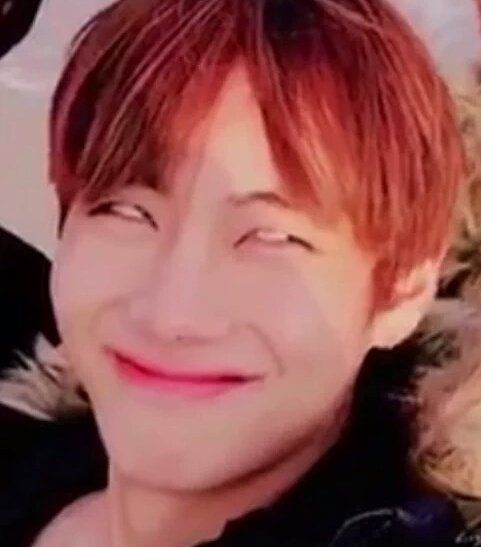 Oops! This image does not follow our content guidelines. To continue publishing, please remove it or upload a different image.

“Anyway you going to finish your story?” He asks me as he stopped laughing and so did I, I just look down again

“well....” I explain the rest of the story to him, he maintained a serious expression through out my entire explanation. After I finish, I ask him “So don’t you think its weird that a wolf out of no where started to protect me from the other ones?”

He cups my face in his hands and makes me look up at him “I mean yea, it’s weird but not totally impossible...so don’t worry about it all right?”

I just nod, instantly feeling relaxed from his touch “good” he says as he moves away from me which makes me miss his touch.

“Are you hungry?” He asks me with his boxy smile

“Come downstairs with me, I’ll make you something to eat” He says getting off from the bed, I nod and try to get up from the bed as well but the minute I try to stand up.

My body starts to fall and since Taehyung was next to me I automatically grab onto his arm hoping he would stabilize me but only to make him fall.....fall on top of me in fact.

I expected to feel some pain on my head so I close my eyes ready for impact but I didn’t feel a thing.

“Ouch that hurt, are you good Y/n?” I hear Taehyung’s voice directly above me, so I open my eyes and notice that Taehyung caught my head with one of his hand and his left arm was supporting himself from being completely on top of me.

“Yea, you managed to protect my head at the last minute, though I was hoping you would have caught me before we hit the ground” I say giggling but he just rolls his eyes, catching onto my sarcasm.

“HEY ALPHA IS THE HUMAN AWAKE YET?!” A random male comes barging into the room but pauses when he sees the position we are in and then smirks.

“Sorry Alpha, didn’t mean to disturb your time messing with your new toy” The man says walking out of the room before Taehyung or me could say anything.

He gets off of me and apologized for what just happened while helping me stand up from the ground. I dust myself off, then turn my head in his direction raising an eyebrow “new toy?”

He gave a sigh of relief as if he was happy about something but then he quickly looks away and rubs his neck feeling awkward realizing that what just happened along with his actions.

I cross my arms over my chest and give him a death glare waiting for an explanation.

“Well? Am I a new toy for you KIM TAEHYUNG?”

Suddenly I feel myself being pinned to the wall, I gasp due to the impact. I feel both of my hands being held by the side of my head. My vision focuses, only to meet with an angry look Taehyung. The look in his eyes sends chills down my spine.

His eyes had a hint go gold in them and also anger?

“Tell me” His voice deep almost like a growl

”Do you believe that you’re my toy?”

“I-i” I had a hard time answering him, feeling a little afraid of the way he’s acting

“ANSWER ME!” he yelled in my face, causing me to flinch but I couldn’t still answer him

he smirked at me and brought his face close to me, his eyes look down to my lips and then back to my eyes causing me to gulp. He opened his mouth

“If you want to be my toy, then I’ll gladly make you one”