Teanna Byerts would love your feedback! Got a few minutes to write a review?
Write a Review

To Fury of Broken Wheel Ranch, who started it all when I was four.

And Lor, who taught me about real mustangs. 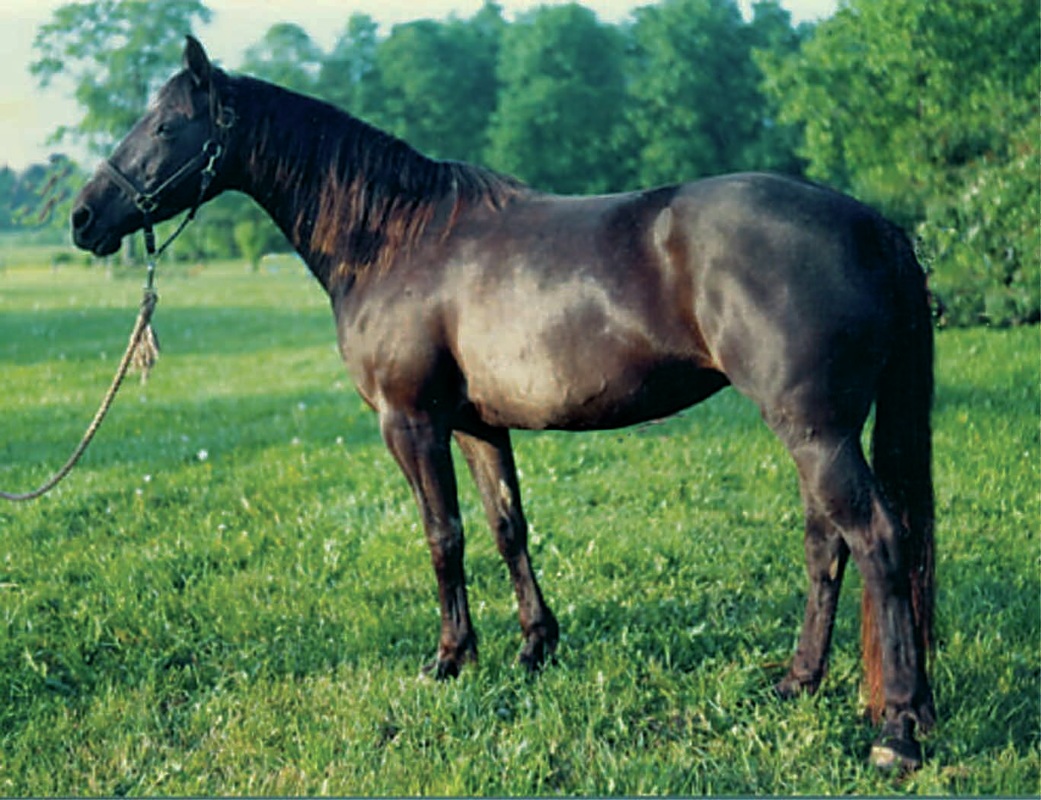 The Elvish Way With All Good Beasts

"A smaller and lighter horse, but restive and fiery was brought to Legolas. Arod was his name. But Legolas asked them to take off saddle and rein, 'I need them not.' he said, and leaped lightly up, and to their wonder Arod was tame and willing beneath him, moving here and there with but a spoken word; such was the elvish way with all good beasts." 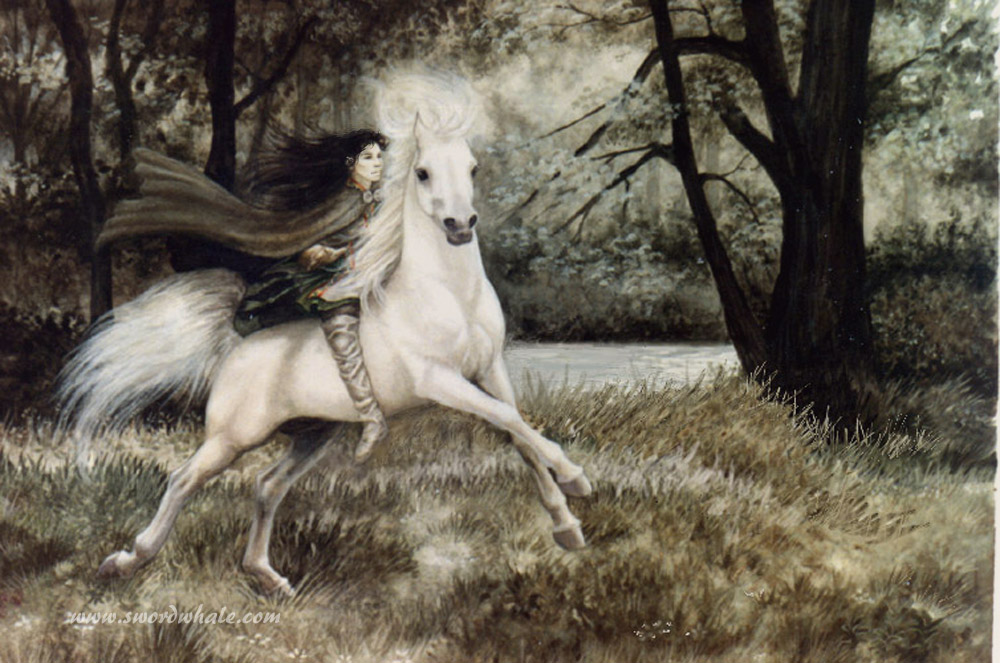 The Grey Horse of Rohan

"How did you escape our sight? Are You Elvish folk?"

The words had been dark with suspicion and fear as an old oak is with moss and tangling vines. They still stung the heart of Legolas, as did the Rohirrim leader's sharp words about the Lady of the Golden Wood.

"Few escape her nets..." Eomer had continued, with eyes as hard as the distant mountains.

Then Gimli had leaped impulsively to the defense of the Lady, and the Elf had found it necessary to leap to the defense of the bloody minded, stiff-necked, and completely tactless Dwarf (despite the thicket of one hundred and five spears pointed at their hearts, spears Legolas had personally counted five leagues ago).

Aragorn had intervened in a most noble and diplomatic fashion, but none of this had been forgotten by the Riders of Rohan in the last few minutes. Tension rode the air like lightning waiting to burst forth in a storm.

Doubtful glances passed among the Riders as the three spare horses were brought forth. Eomer himself handed the reins of the tallest to Aragorn, a gesture full of grace and dignity, despite the dark looks of some of his eored. The Dunadan, who had ridden in cavalries across Middle-earth, even among the Rohirrim, and who had learned his first skills from the Elves of Imladris, mounted with ease. Legolas felt some of the tension evaporate: indeed, the Rohirrim could see that here was the heir of Elendil, a possible strength to the sons of Eorl. A Man much like themselves.

"...who has heard of a horse of the Mark being given to a Dwarf?" Eothain's voice was just short of derisive.

Legolas would rethink the impulsive decision that followed many times in the weeks to follow, though he would never tell Gimli; "...you shall sit behind me..." Why, why did I not think of this! A mail-clad Dwarf clanking at my back will be worse than a mail-clad Dwarf in a boat. Ai, too late now. And despite Gimli's stone-hard toughness and determination, he lacked the necessary skills to handle one of these tall, strong warhorses by himself.

The Riders holding the remaining two spare horses exchanged glances, then looked doubtfully to Eomer. One horse was tall, white with age, battle-scarred and calm. Too calm, tired worn with battle. Legolas could feel it, and the big mare's back was long and sunken slightly, not strong enough for two riders, not on the long road ahead. The other was smaller, with a short back and lighter bone. But light like the talons of a falcon, like Legolas' own hands; slender and hard and strong, a fine gelding, and if the Rohirrim gelded such as this, then their stallions must be very great indeed. He was dappled like leaflight on forest floor; maybe four years old, maybe less. He danced at the end of the reins, the experienced Rider moving with him, but frowning, barely containing him. It was not, Legolas could see, a dance of joy.

Eomer considered the two horses for a moment, then glanced at Legolas, the look in his eyes was not the look of wonder he'd given Aragorn. Those eyes the color of open sky held dark doubt, still, about this stranger from a distant realm. One who had lately been as close as the twitch of a finger to releasing an arrow into his heart. One not of his race, one of the mysterious Elder Folk, who might, for all he knew, wield dangerous magic.

Legolas met his sky-eyes; I forget how quickly the sons of Men change. Our folk knew each other once. It has been but a few ripples in the stream of time since then. Since your folk were the Eotheod, and lived between Mirkwood and the Misty Mountains. But you remember it not.

Eomer reached for the reins of the smaller horse, and led him to Legolas, "I think this one may serve you better, Arod is his name, and the only Man he ever loved is fallen." he said. He did not long hold Legolas' sea-grey gaze but his slight bow, and his graceful gesture with the reins, had the courtesy of Kings.

Legolas nodded, and thanked him in the noble language that had been graven in his head since before Eomer's grandfather's grandfather had ridden his first hobby-horse. He took the reins.

The grey horse snorted and spun sideways in a circle around him. Behind him he heard Gimli grumble something about walking. Riders shifted in their saddles, some standing in their stirrups for a better look. Legolas could hear a few mutter softly in their own tongue. He did not know that tongue, but he could feel some of the intent behind the words; anticipation of something disastrous, or at least amusing. They knew nothing of his folk, Elves were barely more than a legend to them, but the Riders were sure of their own place as Horsemasters. They were sure things were going to get interesting.

To Legolas, the whole scene began to look somehow familiar...

Autumn: I couldn't put it down. It was well written and the author is really great at building suspense. I would definitely read a second book of this story

Cara: I like we're wolves there is some bad grammarBut overall I love the story

Brittany: It’s pretty good I like it so far just wondering if it’s a bit going for me but I will definitely finish it and let you know my thoughts. Great plot!

christienjordaan5: Joh, the Authour of this book is good!! Exellant, well done!!

Cristal Bollinger: It's a different twist to the mating scene for sure.

Audrey Soto: This is a very sweet and short story but I still love it! 💕 Some grammar errors but very enjoyable and interesting.

Relic6_3: It is a pleasure to find an engaging series like this. Well written with a story line that keeps you reading.