On Friday afternoon, Mr. Aizawa ordered us to meet in the 1A Alliance’s courtyard. He was accompanied by All Might, who announced that he was insisting on hosting an American Christmas Eve party.
“I want to show you all how we celebrated Christmas in the United States!” He stated before Mr. Aizawa chimed in.
“And the dress code will be semi-formal. Boys are required to wear a suit and the girls must wear a dress, whether a cocktail or an evening dress is your choice.” Mr. Aizawa explained before dismissing us.
“Oh yay! I’ve been needing an excuse to wear this cute little dress I bought awhile back.” Uraraka exclaimed to Mina Ashido.
“Awh, I don’t have anything to wear. Tsu, do you want to go shopping with me?” Ashido asked.
“Sure!” She answered back, smiling sweetly.
“Can I come with? I need a new dress.” Hagakure chirped excitedly.
“Me too! All of my other dresses are so outdated.” Momo Yaoyorozu chimed in.
The girls hastily left, giggling and chatting, leaving us guys behind to stare amongst each other. Some of us dumbfounded and some excited.
“Yes! I have plenty of suits to pick from.” Iida expressed.
“Same!” Kirishima replied, a big smile gleaming on his face.
Hmm, I have a suit but I’ll have to dig it out of my closet. Hopefully it still fits. It might be a little tight. I haven’t worn it since before I started training, so my arms may not fit well. Wait, do I even have a tie? While my mind was spaced out, I abruptly noticed I was staring in the direction of Shoto. He was staring back, a subtle smile formed on the corner of his lips. I forcefully yanked my eyesight away while heat flushed through my face. Oh no, Shoto is going to be in a suit too. My face reddened to a tomato as these vivid images flashed through my mind. I wonder how good he’ll look.
“Bakugo, are you going to have to get a suit?” Kirishima inquired.
“Hell no, I’m not going.” He responded with his arms folded.
“Awh, c’mon man! So you’re telling me you’re going to stay cooped up in your room all night?”
“Yes, and don’t any of you dare bother me.”
“But it’ll be fun!”
“Like hell it will. It’s fucking torture.” Kacchan scoffed.
“Please! There will be food to eat and I’ll bring my headphones to tune everybody out! Oh, and we can talk shit about people.” Kirishima threw his arm around Kacchan’s shoulder, beaming a lively smile at him.
”Ugh, fine.” He rolled his eyes and shrugged Kirishima’s arm off of him.

The common area was decorated from the floor to the ceiling in traditional American Christmas lights, ornaments and garland. Toasty hot chocolate filled the kitchen with a sweet scent while the warmth from the fireplace kept the atmosphere snugly and cheerful.
There were several varying dishes of American finger foods and snacks scattered about on the table. A couple of the ones I recognized were ‘pigs-in-a-blanket’ and pinwheels stuffed with ham and cheese. On the other table there were peppermint patties, chocolate chip cookies and chocolate fudge adorned upon a platter.
As I scanned through the relatively empty room, I noticed Present Mic installed a DJ stand with a few hefty speakers and a giant subwoofer. Of course he would be in charge of that. Kaminari, Shoji and Tokoyami were relaxing on the couches, talking and laughing. Then there was Mr. Aizawa watching All Might dress up a fourteen foot Christmas tree and placing it at the entrance. He was muttering something about going overboard to All Might, but All Might denied it.
I plopped down in one of the chairs in the dining hall, sighing heavily and roughly tugging on my black sleeves. They are way too tight. The material was squeezing my biceps and my emerald tie was nearly choking me. I certainly outgrew this suit. While loosening my tie, a group of footsteps pounded against the stairs as Iida and Shoto strolled into the room.
I gulped, hard. Shoto’s ebony blazer was perfectly fitted against his body. The white shirt contrasted with his cobalt blue tie, complimenting his alluring eyes. I bit my lip pleasingly, he looks better than I imagined. How is that possible? As he came closer, he caught me staring and slyly winked at me. 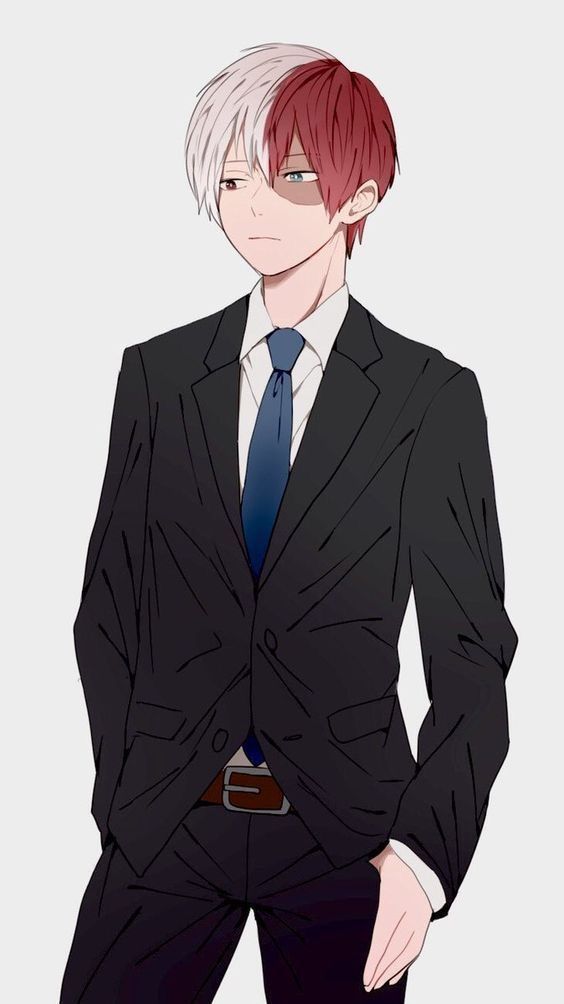 I adverted my eyes promptly while my heart was thudding violently against my rib cage. Dammit, he saw me looking. The breeze flowed against my body as Iida and Shoto passed me. I side-eyed them from over my shoulder, catching Shoto still looking at me. I flinched forward as I became even more flustered. He silently laughed to himself.
“I can’t believe you are dragging me to this lame ass party.” Kacchan muttered to Kirishima as they climbed down the stairs.
“Trust me, it’ll be fun!”
Kirishima’s tight black unbuttoned blazer revealed his pressed white shirt with his sleek black tie. Kacchan’s suit was reversed in colors. The open white blazer showed off his form-fitting black shirt, unbuttoned at the collar. He was already loosening his white shiny tie and staring angrily at Kirishima. 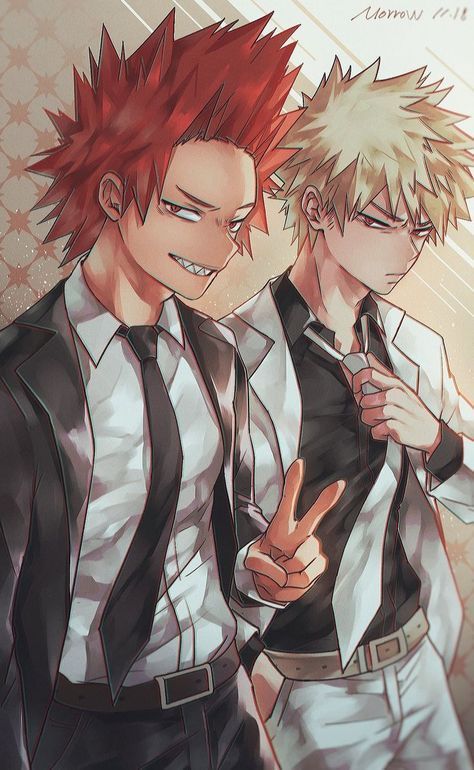