All of us changed quickly into our training uniforms and met on the dirt-covered field.
“Everybody, go to the left side.” Mr. Aizawa commanded.
As we started to do as we were told, he interrupted us, “ah, not you four. Go on the right side.”
“This is bullshit” Kacchan muttered as the four of us crossed over into the area Mr. Aizawa designated.
“Todoroki against Bakugo and Midoriya against Kirishima. I’ll give you fifteen minutes to fight and then you’ll be switching up opponents. I expect you all to fight hard, but don’t severely injure anybody, okay?” His eyes locked onto a scowling Kacchan.
“Yes sir.” We answered.
“Stretch first and then I’ll be back to initiate the fight.” Mr. Aizawa stated as he walked away, taking heavy steps due to his annoyance with us. Today was a bad day to get on his nerves.
“Sorry everyone, it was my fault I got us into trouble. I should have paid more attention.” Kirishima explained sincerely.
“Fuck that shit.” Kacchan sneered, snatching Kirishima by his collar and yanking him into an aggressive kiss.
“I’ll kiss you whenever the fuck I want in front of whoever the fuck I want and I won’t be sorry for it.” Kacchan released his collar and shoved him forward before stomping away. The three of us exchanged glances to each other, not slightly surprised at Kacchan’s actions.
I awkwardly stepped over to an empty spot in an attempt to get away from everybody, but Kirishima stuck close by me.
”Sooo,” Kirishima started as he stretched out his back muscles, “tell me how yesterday went.”
“Oh um,” my mind flipped through the memories of last night. The many thoughts formed a grin across my face.
“Must have been good to make you smile like that. Did you guys do it?”
“What?! No!” I broke eye contact and stared at the ground.
“Ah damn. I’m sure you will soon enough.” What the hell, Kirishima? You can’t just ask that! And what makes you so sure? Is it normal to have sex so early in a relationship?
“Well, what did you guys do then?” He asked.
“We went to Kikko and ate. That’s it.”
“Oh c’mon. Don’t spare the details!” He nudged my arm.
“That’s all we did. We went there after class and then came back. It was late when we got back, so I kept falling asleep. Shoto had to carry me to my bed.”
“Seriously?! That’s so fucking cute!” Kirishima exclaimed.
“I-I don’t remember much. I was tired and out of it. I do remember asking him to stay with me because I didn’t want him to go.”
“Did he?”
“Yeah.”
“Awh! So, you guys slept together but didn’t sleep together.”
“No, we didn’t. Why do you want to know about that anyway?”
He expressed disappointment, “we’re friends, aren’t we?”
“Yes.” I answered firmly.
“Don’t friends tell each other everything?”
I hesitated, “I guess so.” He’s right, but I don’t know how to be so open about personal stuff like that. I can hardly manage being open with Shoto. Hmm, it’s probably best I change the subject. “What’s going on with you and Kacchan?”
“Oh, we’re dating now.” He flashed a huge smile.
“Really? What about all the stuff you said awhile ago? About not knowing his intentions?”
“We talked about it. I told him what I was worried about and he said he truly had an interest in me from the start. He also said he’d prove it by openly dating me.”
“Oh, well I’m happy for you two.” I reinforced my words with a kind smile.
“Thanks! It became official yesterday. We haven’t stopped kissing since. It’s been so great.”
That was unnecessary information. “Oh hey, I found out tomorrow is Shoto’s birthday. I figured we could have everybody hang out in the lounge together to celebrate. Do you want to join in?”
“Hell yeah!” He exclaimed, “oh uh, do you mind if I invite Bakugo too?”
“I don’t mind.” I answered.
Kacchan told Shoto he would stop fighting over me. So, it shouldn’t hurt for Kacchan to be there, right?
“Awesome.” He responded as he stretched his arms up.
I trailed my eyes over to Shoto, who was bent down on his left knee and stretching his right leg out. I hope he won’t mind.
Mr. Aizawa reapproached us, “okay. Midoriya and Kirishima, over there. Todoroki and Bakugo, there. You’ll be fighting at the same time. Absolutely no crossfire. I’m not dealing with that today. Go ahead and get in position.”

“Mmhm.” I fluttered my eyes open. The overwhelming bright light dilated my eyes abruptly, causing a shooting pain through my head. I leaned forward and rubbed my eyes with my fists. I think I’m in the nurse’s room.
“Izuku, you’re awake.”
I squinted towards the voice. The silhouette of Shoto stood beside the bed I was tucked in. He folded his arms around my neck and hugged me.
“I’m so sorry. I’m so sorry. I’m so sorry.” He continously repeated in my ear.
“I-I’m o-okay.” Although I said it, I wasn’t truly sure if I was or not. The pain in my head was excruciating, but the trembling in Shoto’s voice bothered me more. All I wanted to do was comfort him.
“W-What happened?” I mumbled.
He sniffled, “You hit your head on the ground and got a serious concussion with some internal bleeding. Recovery Girl healed it to the best of her abilities. She said you’ll be fine, but you’re going to have a migraine for awhile.”
“Oh.” That explains the severe pain.
“I’m so sorry, Izuku.” His grieving tone ripped me to pieces.
“It’s okay. It was an accident.” I consoled.
“You don’t understand. I could have killed you. If you had only hit your head a few centimeters to the right the rocks would have cracked the base of your skull... Hic.. Hic." His arms tensed around me as his sobbing tears fell onto my bare shoulder.
“Shoto, please stop crying. I’m okay.” My heart ached for him. He’s so upset. Watching him built up stinging tears in my own eyes.
“I’m sorry.” He choked.
I reached up and glided my hand through his soft hair. My poor Shoto. The tears overflowed and dripped down my cheeks.
Shoto pulled back as he realized my discomposure. I stared at him through my watery eyes. His face was puffy and so distraught, causing more of my tears to flood out.
“A-Are you hurting?” He stuttered.
I nodded my head, “yes, because you are. I can’t stand to see you so upset.”
“Fuck Izuku,” he bit his lip, “I’m the one who nearly killed you, yet you’re crying because I’m crying. What logic is that?” He wiped his fingers over my teary face.
“The logic of sharing the pain you feel.”
He hesitated for awhile, pondering through his rattled mind. Finally, he sighed and licked his anxiously chewed lips, “I don’t fucking deserve you.” He kissed my forehead very gently as more of his tears fell.
“Shoto,” I clutched his hand, “It’s my fault too. I-I didn’t want to fight you. I was so scared I’d hurt you like I hurt Kirishima.” I admitted through a shaky voice.
“Stop.” He spoke softly, “it isn’t your fault. I saw you freeze up at the start. I didn’t want to fight you either. I tried to end it early, but I knew what that would mean for us. I understood why you kept fighting. You don’t have to explain anything.”
I sighed and slanted forward, pressing my forehead against his lower chest.
“Mm!” Shoto winced. I jumped back, startled at his reaction.
“I’m sorry!” I yelped.
“No no, it’s fine.” His eyes glistened from the tears. Why did he do that? I glided my hands under his shirt carefully, pulling it up to reveal a nasty purple bruise across his stomach.
“D-Did-did I do that?” I whimpered.
“N-No.” He answered.
“Then how?”
“Izuku, in any other circumstance, I would tell you without hesitation, but right now I don’t want to upset you any further.”
“Shoto.” I growled. I hate when he tries to keep things from me, “tell me. Now.” My face furrowed.
He swallowed, “okay, okay. Bakugo attacked me when he found out what happened. He slammed me into a wall and punched me in the stomach. He was pissed and I don’t blame him. I didn’t try to fight back or protect myself.”
“Kacchan did this?!”
“Hey stop, don’t get mad. I deserved every bit of it. He was worried about you. I promised him back when we were on house arrest that I would protect you. And I already failed. With my own hands at that.”
“It’s not your fault. It was an accident!” I snapped.
“Please calm down.” He propped himself up on the bed and scooted me inbetween his legs. He then laid me down onto his chest, concealing the pain as my weight pressed against his sore body. “Sleep. I’m not going anywhere.”
“I can’t sleep. My head hurts so bad.” I cried.
“I know, but please try. Recovery girl said to let you sleep.” He placed his cooled hand over my sweating forehead, “if I could, I would bear the pain for you, Izuku.”
He chilled the rest of his right side. Ice crystals formed everywhere underneath his clothes. The indirect contact with the ice gave me relief throughout my feverish body. I sighed comfortably and shut my eyes.
“Thank you.” I mumbled.
“Anything for you.”
I calmly breathed in and relaxed all of my tension. Shoto’s steady heartbeat thumped in my ear, slowly lulling me to sleep.
By the way, have I mentioned that I’ve already fallen in love with him at this point? I just don’t know it yet. 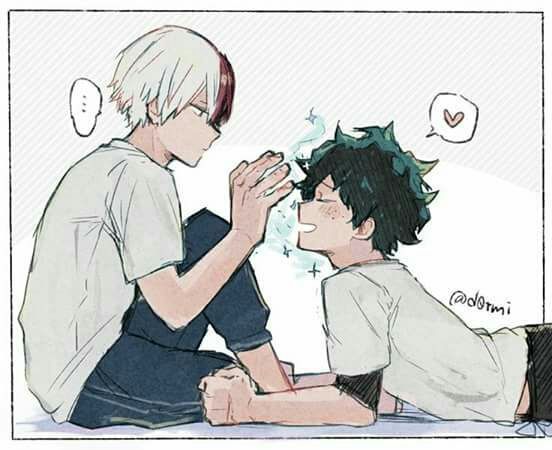