I’m hosting a new year party. It’s going to be crazy I hope . But finally a new year and new things to look forward to ,I wish .

I haven’t seen Draco since Boxing Day , we all left but Draco stayed behind to spend some quality time with his family by himself . Which is nice . I think dracos parents liked me . I hope they did .

I do wish I could see my mum for Christmas.

I think Draco is coming back for my New Years party . Noras and Theo are now together and Blaise and the girl from Ravenclaw which we all get to meet tonight. I’ve heard about her , he non stop talks about her , but he’s been messed around a few times hopefully this time she won’t hurt him. He was heartbroken when he had a little relationship with a Hufflepuff a few months ago . We all want the best girl to come along for him .

It was now time to get ready for the party I had a nice green dress to wear . 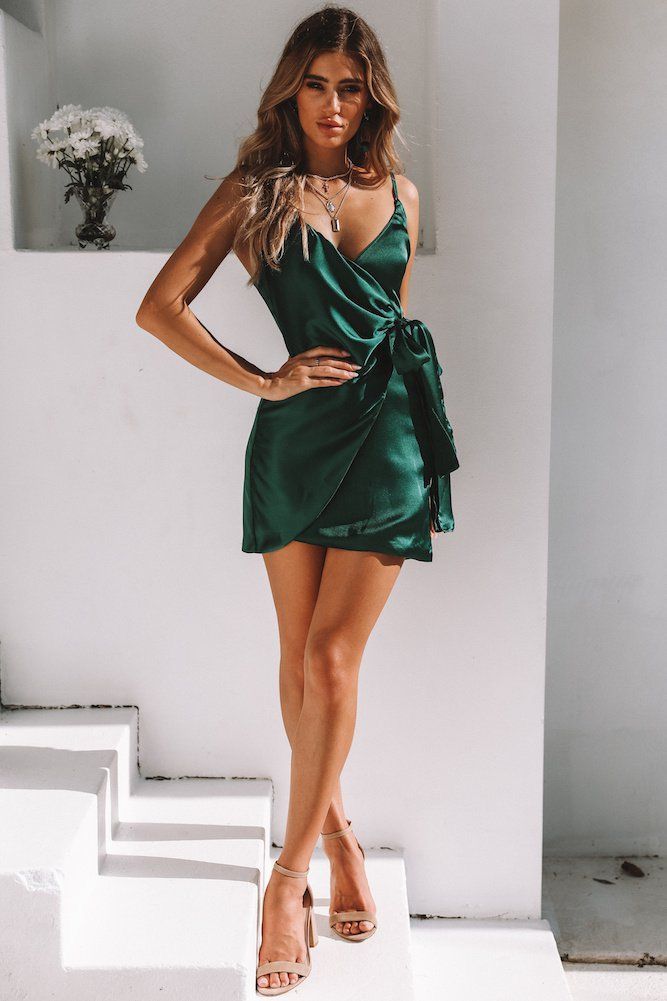 I wore everything in the picture and had my hair like that .

I curled my eyelashes and gently applied my eyeliner. It took a few tries but it soon was perfect . I placed some lip gloss on my lips and moved my lips in and out to make sure it was all on my lips .

Nora had the same dress as me but it was black .

Me and Nora arrived at the party. It had a couple of people there but people were still arriving . Nora wondered off to see if Theo had arrived .however I saw Hermione and smiled so I walked over to her “Hermione you came” I screeched

“Of course I came , why would I miss your New Years party” she returned with a smiled

I gave her a soft hug as I saw lots of people come in dancing and with tons of alcohol in their hands.

It was now a hour in and practically all years and houses were here draco wasn’t here yet .(8:00pm) I waited a little later till I got bored so I grabbed noras hand and I brought her into the crowd of people and started to dance together swaying our hips . As I noticed in the corner of my eye was a tall blonde haired boy wearing a full out black suite .

“Aww ,that’s cute you missed me” he mocked me “you didn’t miss me?” I quizzed him

“Of course I didn’t why would I miss you” fucking dick . I was so confused by what he had just said. Why did it sound so rude or was he joking . I gave him an annoyed head shake as he just walked over to the drink station .

I walked back over to the dance floor with Nora and started to dance .

“Y/n don’t worry about it it’s new year” she told me as I looked over to where Draco was and pansy fucking Parkinson was over their whispering in his ear . I wanted to hit her and ask him what he was saying but I don’t want to seem like a controlling girlfriend.

I walked over to Draco and grabbed his wrists and pulled him into the middle of the crowd . “Dance with me draco” I turned my back to his grinding up against him putting my hands in the air .

“Y/n let’s do some shots instead” he pulled me out of the crowd to the couches who had Nora who was sitting on Theo’s lap and Blaise who was sitting there by himself . Where was his girl? Draco sat in an arm chair and pulled my arm for me to sit on his lap.

“Blaise where’s your girl by the way” I asked as he didn’t look very happy. “she’s not coming” he hardly spoke but a few words could come out his mouth he sounded really sad which wasn’t good .

“We will randomly ask some of our own so I’ll go first ” Nora said, pouring the shots into shot glasses .

“You of course and probably Hermione Granger” everyone was shocked by his response .

“My turn” he shouted

“Y/n who’s the worst person you have slept with” he said, making me turn my head to him . I gave him a death stare .

“I think I’ll shot it” I reached over to the table and grabbed and shot and drowned the lot of it . When I finished the drink I leaned back into draco’s body he whispered in my ear “who” . “Draco that’s the point of the game I shot it if I don’t want to say it” I explained “is it me” he asked it honestly made me laugh .

“It might be” I joked as he got his hand and grabbed my ass. It was a rough grab as well Made me squeal .

“Draco I’m joking” I swiped his hand off my ass . As Nora shouted “DRACO your turn” he scoffed at her

“What is the most sexist thing about y/n”

Her ass ``″and tits” he spoke made me not shocked or surprised .

“Fair enough” Theo said Nora elbowed him in the chest, he whimpered we all laughed.

“Imma get a drink” I spoke, getting up I couldn’t stand up for a minute my feet were wobbly. Draco held me waist as I got stable and walked me over to the drinks .

“Thank me later in the bedroom” he winked and licked his lips looking me in the eyes his eyes were so beautiful .

“I shall don’t worry” I winked back and smiled .

“Let’s get drunk,” he said . I raised my eyebrows out of disbelief as he likes seeing me drunk . “Yep I mean it ,it’s New Years ” he said. I was so confused but oh well . I shrugged my shoulders and got a drink and downed it. Draco did the same. We got some shots for us two and did the cross armed drink thing .

He reached out and smashed his lips against mine as he was pushing me back . I wasn’t sure where but then my back hit the back of the wall he pushed me up against the wall and kissed me rough I liked it though . He used his tongue to lick the bottom of my lip for me to let him in . I let him enter .. our tongues were fighting like two pairs of swords . ‘I love you’ he whispered into the kiss .

I realised out of the kiss . “I love you two” shortly after I went back in . Kissing once agin our tongues fighting for dominance.

We both got some muggle herbs from Theo and Draco started to smoke it , then passed it to me. I took a puff and held it in for a few seconds and released it. It was good shit . We kept taking in turns to smoke it kissing in between.

the party was ragging, the music was blasting, everyone was still dancing and drinking . Everyone was either high or drunk or both . I however was both so was Draco . Our heads were spinning and we kept laughing at each other for nothing . I felt very euphoric .

“Omg their stoned haha” Nora looked at us, me sitting on his lap as we both giggled into each other’s faces .

“Least their having fun ” Theo responded to her giving her a little nudge .

“Guys come on it’s nearly 12” Nora tried to shout over the loud music . “Yesss mum” I shouted at Nora, completely stoned . I pulled Draco up “come on draco let’s go celebrate” he just nodded as he stood up we both couldn’t stand up very well tho we were everywhere .

I looked at Draco and he looked at me; we both kissed as it turned 12 and were still laughing.

We danced for a bit . Draco danced with me and he had good moves .

“Draco” I whispered into his ear

“Yes beautiful” he whispered back

" leaving so soon” Nora asked, winking at me I gave her a smile .

he couldn’t wait so he stopped me in the middle of the corridor and lifted me up , my legs wrapped around his torso and his hands on my ass holding me up . As he carried me to my room which was a few doors away from the common room he opened the door and threw me down on the bed as he slammed the door shut with his foot .

He walked over to me he unbuttoned his jacked and threw it on the floor then unbuttoned his t-shirt he was struggling so I got up and did it for him . He smiled at me and I unbuckled his belt pulled down his trousers. “Wait here i won’t be a sec” I said as I swayed my hips slightly “don’t be” he caught my arm before giving my ass a gentle slap . He let go of my arm as I headed off to my bathroom and shut the door .

I slipped my dress off and put on my new black / green set of lingerie. I slipped into it and I opened the door and leaned against the door as I saw Draco looking at me up and down . Practically googling .I chucked as I swayed back over to him as I climbed onto him . I gave him a kiss before I moved my kisses down his pale skin down to his boxers. I pulled them down off his feet as his huge length sprung up to his lower body . I gently grabbed it . Moving my hand up and down looking him in the eye “suck it” he demanded .

I obeyed and sucked it I put his huge length in my mouth pumping up and down slowly while looking at him in the eyes .

I could feel my pants starting to get wet as I was moving my mouth on his dick . I heard and felt the saliva on dracos hard dick as I heard him let out moans and groans . It was one of my favourite things to hear . I took my mouth off his dick as I sat up and put my legs either side of dracos waist and put the tip of his dick and swirled it around my entrance as I pushed it inside of me . I leg out a loud moan as I covered my mouth.

“Don’t you’d dare cover your mouth” he demanded again as he pushed my hand away as I moved forward as I kissed him . He was pumping inside of me . It felt amazing. “Fuck” I yelped out as Draco moved his body up and lifted me up and flipped so I was on the bottom . He started to pick up the pace.

“Your so fucking hot I can’t cope”

He shouted, putting his hand on the sheets, grabbing it .

Still trusting in and out , as my walls clench up around his dick . Us both letting out loud moans and groans

“Draco I’m gonna-′ I moaned out

“Not until I say so baby” he grinned, trusting harder .

I released as my eyes rolled to the back off my head as it was so good and intense.

He collapsed down beside me and tried to catch his breath .

I climbed into bed and snuggle into draco’s arms .

“Y/n that was amazing” he said and I nodded in agreement .