Coy.is.Katsukis.wife would love your feedback! Got a few minutes to write a review?
Write a Review

Bakugo looked at everyone and yelled “ALL YOU NERDS PAY ATTENTION”

You rolled your eyes “yeah,yeah whateva just go”😒
He stuck up his middle finger”shut up you damn nerd!”

You put your hands infront of your mouth as you laugh.

Bakugo threw the ball as far as possible including him using his quirk he got 1000.0m in his throwing distance

Katsuki rolled his neck and laughed “Whatever”

He smirked at you and winked

You punched his arm “eww nasty”

Katsuki laughed and went by karishma

Mr.Aizawastepped back infront of you guys okay next up Y/n L/n

You grabbed the ball activated your quirk and using the air segment of your quirk using half you managed to blast the ball 7,000.0 meters into the air

Everyone gawked and stared at you

You had that ‘whatever look on yo face’

You walked back to your spot and stood there waiting for the class to end.

he walked up next to you “so you did beat me huh”.

With a smirk you said “well duh I’ve always been stronger”.

He rolled his neck then shook his head and laughed “no I let you win all those times when we where younger”.

Kirishima walked up to you and Katsuki “hey I’m kirishima”

You akwardly stood their and just said “same”

Kirishima then said some that made the conversation even more akward “I never heard the name y/n before are you from Japan?”

Bakugo interrupted before the conversation could go any farther
“Hey shitty hair go help your girlfriend”.

You look at Bakugo

He rolled his eyes Trynna hide the fact he was blushing.

“what are you looking at nerd”

You looked at him and said while smirking “I know imma nerd smarter then you dumbass”.

he started tickling your stomach “take it back”

“Stop you son of a-.”
you start laughing and he kept tickling you so you punched him on his arm

You look at her “hey Uraraka I’m y/n”

Uraraka cheesed at you “your quirks really cool by the way”

Uraraka leaned all up in your face “what is it”?

Uraraka started getting excited “so you control the four elements?!”

Uraraka paused between words and yell all up by your ear “So..freakin...COOL”

you jumped a little because of how loud she screamed.

Uraraka rolled her eyes at bakugo waved And ran away towards midoriya and some dude who was yelling and chopping the air.

you smirked and playfully pushed bakugo’s shoulder “thanks again dumbass”

he laughed “no problem you got damn nerd”

You smiled and he looked at you while he was rubbing his neck “what”? he looked up “nothing nerd”.

Mr.aizawa: okay now that we finished that part of today’s training we are finishing up today’s class inside the gym increasing your quirk skills is that clear”

Everyone in unison said okay or sure in some way shape or form they let him know that he was clear.

he rolled his neck “Tsk whatever”

Everyone practiced and practiced.

And when you we’re practicing on trying to use more then two of your elements from your quirk at the same time someone came up from behind you “hey I’m mina i’m in the dorm next to yours!”

Mina smiled” oop my bad girl i didn’t mean to sneak up on you like that but me and a few of my friends including the angry pomeranian are having a movie night tonight you wanna come”?

You look at Bakugo ” why just why” you say shaking your head.

Another time skip: after school

He laughs while walking with Kirishima and kaminari then stops in front of you”you coming”?.

you roll your neck”I guess”

He stops walking with his friends and looks away holding his hand out for you to grab. “c’mon then”

You roll your eyes and reach for his hand “fine”

“you made me fall dumbass”

He laughed “my bad”

You guys walked back to the dorms together

You go to your dorm and shower,moisturize and get dressed wrapping your hair inna bun before leaving
You had this on with the bun: 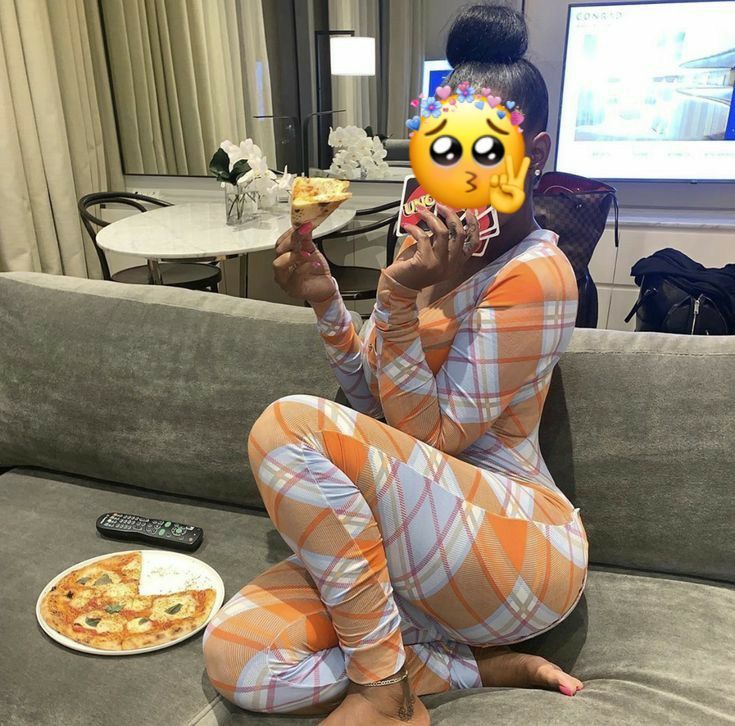 when you finally get done you meet the others in Mina’s dorm she introduced you to everyone “the boy who has the lightning bolt in his hair is Kaminari and the one with the red hair is my boyfriend kirishima the girl with the earphone jacks is Jirou and of course you know bakugo already”.

your not usually a people person but mina seems like the typa person you would hang around her vibes where sum different.

Bakugo was the one who walked into the room last he had grey sweats on and a black t-shirt he walked over to you saying “what’s up shitty nerd”.

You looked at him rolling your eyes and laughing “boyyyy shut that shit up,wassup though”

Mina got up to use the bathroom while Jirou,kirishima and kaminari where on their phones.

Bakugo sat down on the bean bag chair in the corner of Mina’s room, he punched your arm playfully and smirked”I’m surprised your introvert ass actually came out”

Bakugo looked at you with a ‘i know you fuckin lying look’. “shut the fuck up im not friendly”

You shook your head “whatever you say Blondie”

Mina had came back from the bathroom Bakugo had let your neck go when mina yelled “IM BACK”! kirishima and kaminari picked their head up from their phones “oh hey Bakubro hey y/n”

“STOP CALLING ME THAT” kirishima yelled at Bakugo

“WHO THE HELL ARE YOU YELLING AT SHITTY HAIR” you and mina both start laughing.

You and mina stop laughing after they keep going back and forth for a good minute and she yelled at them both “IF YOU BOTH DON’T SHUT THE FAWKK UP I SWEAR TO ALLMIGHT IMMA BEAT BOTH OF YALL Assess”.

You gasped making the ’🤭’face ” well damn she told you”

Bakugo got mad and went silent after

You smiled before you said “Back talk”?
Mina laughed and finished the rest”it’s quite ain’t no back talk” and you both laughed.

she went to Hulu and put on the movie ‘RUN’ you sat back and mina handed you a S/N {*Snack name*} you smiled “thanks girly” she looked at you “no problem”. Jirou you and mina where all sitting on a futon and the boys where spaced out kirishima on mina’s bed, bakugo on the floor laid out and kaminari laying at the foot of mina’s bed. Jirou pulled Gatorade’s out of her blanket she had sneaked them past the boy’s and gave them to you and mina she had one for herself.

y’all three sat there snacking when kaminari turned to see you guys drinking and eating “THEY HAVE GATORADE’S” he screamed and kirishima and bakugo turned to see you guys eating and one of you guys had your Gatorade on the floor. you,mina and Jirou all said “fuuuckk” in unison kirishima grabbed the chips from mina and said “can i get some my little pebble?” she rolled her eyes and said “Just have them” bakugo and kaminari ate the chips kirishima took from mina.

Everyone including you where knocked out you where laying across mina’s lap and Jirou was laying on your leg you here something fall and everyone jumps awake you see Uraraka with your phone in her hand you try calming your self down “Uraraka why The FAWK is my phone in your hands right now” you cup your hands together and put them in front of your lip. She looked at you and nervously rubbed the back of her neck “well-i uh..-well” you widen your eyes and snap your fingers “Hellooo speak bitch” she started stuttering “Lo-look y-y/n i-i-i-i’m s-o-sorry i needed the money i’m sorry” you rolled your eyes cupped you hands and let them swing as you bounced your leg back and forth {hopefully y’all know what i mean} “Uraraka you got 1.5 seconds to put my phone down and get the hell out” she rolled her eyes and had the nerve to try running with your phone.

Before she could reach the door you Usain Bolted after her yanking her backwards and slamming her then you started two piece combo-ing her and giving her dem Popeye biscuits{basically you was working her shit beating dat ass} she got a few hit in but they weren’t crucial bakugo, Jirou and mina used all their force to pull you off of Uraraka you snatched your phone “don’t ever fix your brain to think to steal from me again you doodle bob built bitch” she got up and cried running to her dorm.

The rest of the night was spent with jokes and y’all laughing, “that was very unmanly of - wait she’s a female so that was very unladylike of uraraka to try and steal from a fellow classmate” kirishima said while shaking his head.

mina&Jirou had told you “Girl don’t worry about uraraka she a lil um... broke” you all three broke into laughter Jirou had said “yeah i caught her picking pennies from the wishing fountain at the mall” you chimed in “damn she going out sad” you all three start laughing you where laughing so hard that you started sounding like a Windex bottle sksskdkskks {sum along those lines lmaao}

you where still tired and decided to go back to your dorm to get some sleep but before you left you six decided to play never have I ever it was hard convincing Bakugo to play but he eventually agreed. Mina was the first to ask someone “hmm never have I ever had feelings for someone close to me” mina laughed and rubbed her hands together.