She🌸/They✌️/Moon🖋️ would love your feedback! Got a few minutes to write a review?
Write a Review

★Y/N WAS BACK FROM A MISSION and she was more tired than anything in the world. She had just woken up and she had to be up and about of the five am shoplift for food, and it was heaven the holiday season. Since she was a child she never understood the meaning of having a giant piece of plastic with even more shit plastered on it for fun, never the joys of opening gifts with or without siblings or just simply to have anything that simply yours that won’t leave you but love you.

She lit a cigarette and looked out the window, she was back in the base, bored out of her mind. Shigaraki was on a mission with the rest of the league, including Dabi. Alone out and about in the league. She was blinded by all the Christmas lights twinkling from people’s houses, she hated it, she was so bitter and angry that she could not have it like that as a child. She instead thought about crimes of all kinds. Sitting there and just sulking to herself.

Suddenly she heads to the door, her cigarette still in her mouth and lighter in her pocket. She was hungry and decided to make a meal for herself. Noodles would do the job. That’s the cheapest alternative to ramen

It was so good!!! She never ate anything better. Slurping it up in minutes.

Dabi chuckled to himself as he entered, hearing the girls bicker.

“Missed me doll face,” Dabi asked slyly. Slithering his arms around her waist as he placed his head around her shoulder, giving her a peck on the neck

“You..” She said in an ice-cold tone, escaping her mouth. That was her pouting now. She was not happy that her alone time was finished and that the ugly rat and the burnt bacon boy were in her vicinity. She liked burnt bacon, the taste but not the smell...

“Go shower Dabi, you stink,” she said, making her way out of his grip to the sofa. He followed her, he had no problem being cuddly and claiming what was his everywhere at any time of the day or night.

“Ok, but I want to cuddle now, “He said pouting like a child who knows he will get whatever he wanted if asked for it nicely.

“Fine,” she replied, making space for him. He was already on top of her, nuzzling his face in the crook of her neck as she was already so tired she did not mind. As I said, she loves burnt bacon the way he is as he is, a pouty but dangerous mess of a man, her man.

We stayed that way for the remainder of the night. He was just pushing me more into his embrace as we switched places. He shifted us as he liked when I lay on his chest, not the other way around. He warmed me with his quirk as he purred like a kitten when he slept, just aww. He is not this cuddly around everyone, I mean I can’t complain when I love him when he is like this, just brings a smile to my face even when we have to keep it serious. Just can’t help it like I am falling for him all over again. I stare at him for a bit longer before falling asleep myself. 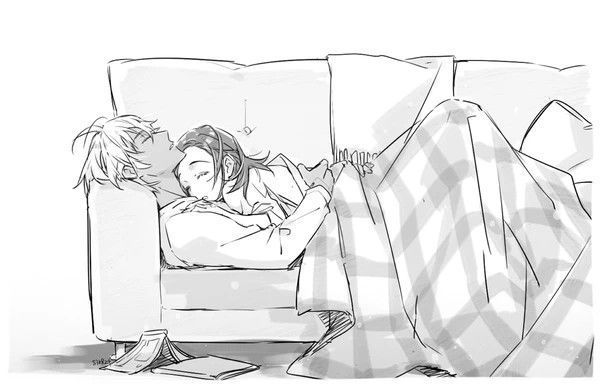 When I woke up I saw Y/N in my arms, we were close. She was sleeping peacefully like a kitten. Blessed to be in my arms of course (A/N- he is our Dabi). I lightly stroked her head with my left arm as my right supported her so she would not fall off me, she made herself comfortable on me. She had pure peace with her, and I was just lucky to share a bit when I was with her. She woke up, looked at me, and blushed a little

“Morning..” She said in a raspy yet clear morning voice. She looked well-rested for once in her life, can’t say that I was not glad

“A good morning better yet,” I said, my usual smirk on my face.

“Glad you’re back to your usual self Dabs,” she said. I was somewhat sad but couldn’t help but wonder why girls don’t like it when guys almost beg for attention, but Y/N is not like other girls. She really hates it, doesn’t she? I got up from my spot and she sat up. I made myself something to eat.

“Oi, are you going to steal the expensive ones again,” She said, disappointment in her eyes, they were soo good I did not care, not like she didn’t steal them from Fullfoods again yesterday

“As if miss thing,” I said laughing, gulping down every single part of the ramen.

“At least you can share,” she said coming towards me, grabbing the ramen out of my hands, scoping up the chopsticks, and finishing the rest of it. She kissed me and licked my lips.

“My girl couldn’t resist me so she had to lick the taste of the ramen right off my lips,” I said proudly like I won a medal. I drank the remainder of my soda and got dressed. n

“Get off of me,” Y/N said before having to shove off Toga of oh her

“Mean..but funny ” Twice exclaimed through the doorway, coming to the fridge and getting breakfast.

“Shut up everyone” Crust, dust, and must king exclaimed angrily

“Rather not shiggy!” I said he looked at me and scoffed.

“Kurogiri gets over here, you shut up and we discuss the plan for an invasion !” He said like he was coding a game.

“We will discuss the plan for the rest of the day,” I said to Dabi, who was sitting next to me

He gripped my thigh as yes

“Want to ditch?” he asked, devilish lint in his eyes, a smirk on his face forming on his face

“Anything is better then this” He whispered laughing

“Better get going than Dabs,” I said as I got up from my seat, him flowing behind me

“You two are going where? ” Shiggy asked

“Away Tomura, away,” I said to him like he was a dumb dog

Dabi just chuckled as we existed hand in hand.

A night walk awaited us, long as we discussed our plans, made snowballs, and hit each other with them, ordered hot chocolate, and chatted

angiesim82: I enjoyed it especially the fact that it is not the traditional story and has reality in it. They both loved her but only one realised his mistake and made up for it. The other was an ultimatum.

Read Now
The Good Girl next Door by Heidi Mae

Samantha Alexandre: I love the story. It had me hooked on the 2nd chapter. Reading uiur book gave me the confidence to share kine so soon I will have a couple of mine on here. Can't wait tonread more. and will share with all my girls to read

rileysonya33: This feels either unfinished or a sequel is coming

conjim: This is amazing. I can't stop reading! Keep it up.

karenlabuschagne58: The topics are relevant and relatable and I like that it is about real life and trials of couples and I would recommend it to my friends

Read Now
A Ring of Toadstools Red by Datura Moon

Anissa: Even though it’s an amazing short story I wished it was longer or they made some sort of series. Other than that amazing !

dlmccoy57: I love short stories. This is one of my favorites. This story tells you that love can be found in some remarkable places and age does not mean anything. Love comes from the heart not age.

Read Now
Because Of Your Shame - [KookMin] by SrCris20

gailbutts126: I especially enjoyed this story. It had all kinds of twist and turns. A little morbid facets. It was well written. I would recommend it to allreaders.