Nicole Starleigh would love your feedback! Got a few minutes to write a review?
Write a Review

In Walks a Winchester 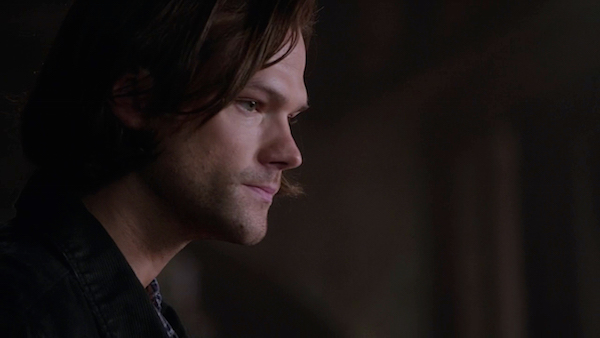 You don’t think much of it the first time you see him. You’re working at the coffee shop that day, and it’s your Friday (even though it’s Sunday). It’s quarter to three in the afternoon, the end of your shift, and business is slow. You are sweeping the floor again to pass the time when he walks in the door.

You put on your best smile to cover the fact that you just want to get out of there, and meet him at the counter. “Hi! What can I get for you?”

He smiles back. Then he peers up at the menu on the wall with tired eyes while you wait. Even as he slouches, you see he is taller than anyone you know. You can’t help but notice the breadth of his shoulders that he tries to hide under layers of flannel and a thick canvas jacket. “Uh,” he says, and clears his throat. “Can I just get a hot green tea?”

“Sure,” you say, still displaying your best professional smile.

As you ring it up, he says, “Can I get one of those panini sandwiches, too?”

You nod. He smells like he hasn’t had a shower in a few days and is trying to get by on cologne and public bathroom soap. You don’t remember ever seeing him around before. You wonder if he’s traveling, or homeless, or if maybe he got into a fight with his girlfriend and she kicked him out. He’s not wearing a ring. “What’s your name?” you ask, holding the paper cup in your hand with your pen ready to roll.

“Uh...” He has to think for a minute. He looks right at you and squints one eye. The corner of his mouth turns up. “Sam.”

He doesn’t want anything else, so you total it up. You turn around to make his sandwich, adding a little extra meat and vegetables because you feel bad for him. You just know he’s had a rough couple of days. While that heats up in the toaster oven, you pour steaming hot water over a bag of green tea in a larger cup than the one you’ll charge him for. There is just something about this man that you can’t quite put your finger on.

Nanami, your relief, walks in tying her apron around her waist. “Hi,” she sings. She’s always so pleasant. She takes one quick glance at Sam and steps up to the register to cash him out.

You could leave right now and let Nanami finish out his order like you would on any other day with any other customer, but you glance at him as he waits by the pickup counter, scrolling through his phone with creases in his forehead. He hasn’t removed his backpack from his shoulder. He only looks up when you slide his tea across the counter with a few packets of honey. “Milk?” you ask.

He frowns as he shakes his head. “No, thanks.” He’s an old soul, you feel it. You bet yourself that he’s got some stories to tell, and you only wish you were forward enough to start a conversation. But you don’t have time, and he doesn’t look like he wants company right now, anyway.

The toaster oven beeps and you run to grab his sandwich before Nanami does because you want to be the one to give it to him. She’ll ask you what that’s all about later, and you’ll tell her. But for right now, you just want Sam to look at you one more time.

You slide the plate across the counter for him and he thanks you. Satisfied that you’ve done something nice for someone who deserves it, you smile and give a quick shift change to Nanami. Then you run to your locker and grab your keys and your purse so you can make it to the library. You need a few hours to do some research before it closes. You are notorious for waiting until the last minute to get your assignments done and this one is no different: your deadline is midnight.

You wave at Nanami and Seth, the new kid, as you walk through the cafe toward the front door. The managers don’t want you using the back door any more after the incident with the weirdo a few weeks ago. Some creep was hanging out in the shadows out back when you and Nanami walked out after closing time. You could barely see him, but you both knew he was there. You’d never been so freaked out in your life, and you thank God neither of you were alone that night.

Sam is seated at a table by the front window. He’s hunched over his plate, holding his sandwich in one hand and plucking the keys on his laptop as he chews, but then you remember you’re staring as you fish your keys from the bottom of your purse. As you pull the door open, Sam looks up. He sort of smiles at you with his eyes because his mouth is full of food. It makes you pause - just for a moment.

You’re suddenly aware of the awkwardness of the situation and make your escape just as he starts to get up from his seat, swallowing his food. You curse yourself once outside. What if he was trying to talk to you? It’s too late to go back in there without looking really dumb.

Nichole: Loving how I am able to visualize details and get drawn into the storyline.

Read Now
The Witch Among The Wolves by MsKittenMarie

Kessii Schneider: Can't wait for the next Update!!!!!! ♡Greetings from Germany! ♡

Whydra: Absolutely adore this short story. It's very well written and has a nice story-plot. Can recommend it for everyone that likes were-storys 🤗

Sandra Bennett: So far the books have kept me totally captivated, I am eager to find out who her last warrior will be. I have not been disappointed with any of the books that I have read

Bkprice: I’m glad she has Cal

sherylbluebird: Enjoy from beginning to end

Read Now
More Recommendations
So Much More by cm.jines

Nova Nyx: I binged. Can’t wait to find out how everything plays out. Well written and captivating. Just love it! ❤️

Patrice Amelia Francis: Its good . Great work. Love the mystery and the chaos . The children and all the Characters

Sandra Bennett: I am so gripped with this book series. I am so intrigued to find out whose fated mate will be for the brothers and their friends

franhemmer5: This book is way better than part one and that was pretty good and interesting. But this beat it. I cannot wait for part 3. You go with your getting better and better with your writing self. Please keep up the great work. 💞

Eddie Lhérisson: I love the book and the plot so far but I'm a bit confused about a lot of the details: so her wolf "mate" didn't want to bit her because he also felt she was from another species but he never mentionned anything? The twins are royalty but are being reprimanded by their guards? Guards placed by th...