Looking back at the cooling airplane, I opened the door and sat down on a comfortable leather chair. A dark wooden dashboard so polished it reflected the light of the stars was what I saw. I closed the door hearing the lock click, I waited but we didn't move. I turned to the driver as Julian turned to me and stretched his hand in an offer to shake.

"I'm Death." I sat there, at a loss of words. I can tell you, I must have looked ridiculous. I am grateful he did not laugh at the face I made but seriously... Death, and I was sitting in his car.

Death held his hand up and I reached out, slowly shaking it, he quickly proceeded to look forwards and turn the car on. The engine rumbled to life and almost as quickly faded to an absolute silence. In my stupor I noticed that it was an automatic drive.

I have no idea how long we drove, I mean we passed by countless cars but the airplane ride kept going through my mind. I was absently aware that all the cars made plenty of space for us if we wanted to exit some part of the road or if we wanted to incorporate.

It felt like it was going to be a rather monotonous ride to... wherever he wanted me to go until the radio came to life and started playing music. Rather ominous music too, lots of bass choir singing and humming. Death activated the right blinker and pulled over in front of a fast food joint I had never heard of. Slowly, he parked and engaged the breaks, turning off the engine which rumbled off to nothing.

Looking at me, he extended one finger, tapped my forehead and next thing I knew we were inside the restaurant, him happily munching at some food.

I looked around, mildly surprised and saw Death dipping one single french fry in a little cup of ketchup. At least I hoped it was ketchup...

"Of course it is ketchup. You want some?"

I politely grabbed it and took a small bite. It was actually quite good, deliciously crunchy. I then noticed that I had my own plate with my own burger, own drink and fries as well. Having died and not eaten for several hours I must admit that I was famished and to my embarrassment had almost literally inhaled my burger, fries and half my drink before I came to my senses. Noticing my plate was considerably emptier than his I finally looked around the establishment and recoiled in my seat as it registered to me that everyone was quite dead.

"Unfortunate, but it happens every time I go out to eat." Grabbing his paper cup, he took a long pull from whatever his preference for soda was.

Placing it down on the table, he wiped his lips with a napkin and folded his hands on his lap. Looking at me with an intensity that made me feel naked. It was like he could see everything. Everything.

I shuffled uncomfortably on my seat and swallowed the lump on my throat that had not been there a moment ago. "Can I help you?"

He took a deep breath and gave a small chuckle.

"Can you help me..." He repeated. "That depends really. I'm not sure you can, but there is a possibility you could."

Okay, progress. I thought. I wasn't too sure that could count as progress though.

He started playing around with his ring, a small jet black hoop with a midnight black onyx was the gem. 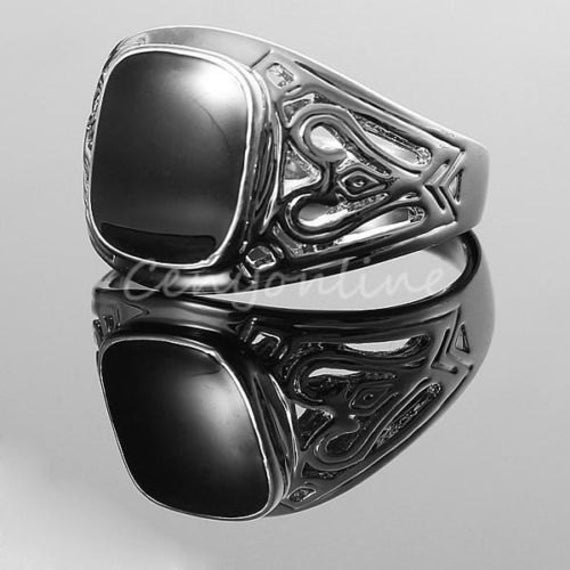 He took it off, and something changed about it. It's color became duller and the stone ceased to reflect light, instead becoming blacker than clack. It seemed bottomless... I was sure if I dived inside I would never come back again.