H. C. Andersen would love your feedback! Got a few minutes to write a review?
Write a Review

Story the First, Which Describes a Looking-Glass and the Broken Fragments.

You must attend to the commencement of this story, for when we get to the end we shall know more than we do now about a very wicked hobgoblin; he was one of the very worst, for he was a real demon. 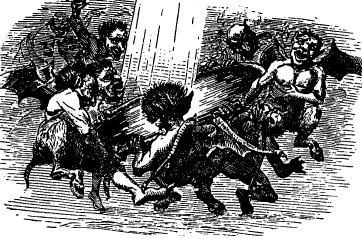 One day, when he was in a merry mood, he made a

looking-glass which had the power of making everything good or beautiful that was reflected in it almost shrink to nothing, while everything that was worthless and bad looked increased in size and worse than ever. The most lovely landscapes appeared like boiled spinach, and the people became hideous, and looked as if they stood on their heads and had no bodies. Their countenances were so distorted that no one could recognize them, and even one freckle on the face appeared to spread over the whole of the nose and mouth. The demon said this was very amusing. When a good or pious thought passed through the mind of any one it was misrepresented in the glass; and then how the demon laughed at his cunning invention. All who went to the demon’s school—for he kept a school—talked everywhere of the wonders they had seen, and declared that people could now, for the first time, see what the world and mankind were really like. They carried the glass about everywhere, till at last there was not a land nor a people who had not been looked at through this distorted mirror. They wanted even to fly with it up to heaven to see the angels, but the higher they flew the more slippery the glass became, and they could scarcely hold it, till at last it slipped from their hands, fell to the earth, and was broken into millions of pieces. But now the looking-glass caused more unhappiness than ever, for some of the fragments were not so large as a grain of sand, and they flew about the world into every country. When one of these tiny atoms flew into a person’s eye, it stuck there unknown to him, and from that moment he saw everything through a distorted medium, or could see only the worst side of what he looked at, for even the smallest fragment retained the same power which had belonged to the whole mirror. Some few persons even got a fragment of the looking-glass in their hearts, and this was very terrible, for their hearts became cold like a lump of ice. A few of the pieces were so large that they could be used as window-panes; it would have been a sad thing to look at our friends through them. Other pieces were made into spectacles; this was dreadful for those who wore them, for they could see nothing either rightly or justly. At all this the wicked demon laughed till his sides shook—it tickled him so to see the mischief he had done. There were still a number of these little fragments of glass floating about in the air, and now you shall hear what happened with one of them.

Maria Guthmiller Conley: I enjoy as the books continue that new characters continue to be added that add a whole new depth to the story & play a key role or action in the storyline. I love their depth of character. It would be nice to have some normalcy for but a moment... Before the world becomes unsettled yet again. Bu...

Read Now
The King by Eris

francess1982: Compulsive reading! Intriguing plotlines and loving the king's character Cyrus - evil and attractive all rolled in together. Dangerous combination 😁😁

cjhawkins20: Your story line and characters come alive. The story stays active even after I’ve set the book down. Well done

Maria Guthmiller Conley: So wonderful to see that you can use the horrors of a life from a pack & build that character into an alpha of that same pack. The clan grew again by what...doubling! I'm looking forward to the war. They will win.

Maria Guthmiller Conley: This is amazing they all are mated. Even after 40 years. The Goddesses are awesome. The clan is huge & still growing. Love all this storyline & history & back stories & characters & I could go on. I love this series.

Maria Guthmiller Conley: The change up was superb. The supernatural aren't completely immune to devastation or order. The cubs growing & every character being so uniquely defined. I love these books.

Read Now
Beauty and Her Beast by Jennifer Miller

Mazlyn: This book is thrilling and amazing. It literally took me on an emotional roller coaster ride. I am absolutely a huge fan.

Alexandria Newell: It was good but the whole story should be there.

Jessica: Love the plot line, can't wait for the next chapter