Triscribe would love your feedback! Got a few minutes to write a review?
Write a Review

Something wet trickled across her face, causing Crant to squirm and open her eyes. She blinked up at the open end of a water pouch being held over her, and beyond that the cat-like features of a felisapi.

“Good morning.” He said cheerfully. “Don’t move, or you might tear the stitches I put in.” Blinking in confusion, Crant tried to lift her head. She managed to glimpse linen bandages on the places she remembered getting injuries, and quite a few more than that, before dropping her head back down. The rustle of grass told her that she was still in the field from the night before, the stench of death all around confirmed the damage she must have done.

“I’ve heard that when a wolfen transforms, they cannot recall things that occurred while in their other shape. Is that true?” The felisapi healer inquired.

“...Yes.” Crant answered, her tongue feeling fuzzy. “For the most part, at least. I remember vague images, sometimes snatches of sound. Usually screams.”

“Well, there was quite a bit of that last night.” He chuckled humorlessly.

“You saw what happened?”

“Not me personally, though several of our sentries watched all of the action. They called for reinforcements, but decided not to engage unless you tried to enter the forest. Fortunately for everyone, you returned to your human shape after killing those men, then passed out from blood loss.” Crant nodded absently. Her healer’s description matched what typically happened when she shifted to her wolfen form. It was a dangerous thing to do, as her other shape was little more than an unstoppable killer, but there was no other way she could have survived that battle

Steps coming towards them made Crant glance up again. A female felisapi, wearing elegantly crafted hardwood armor and a pair of thin shortswords on her hips, stopped where she could look down at Crant’s face. The two of them exchanged neutral looks for a moment.

“I see you have awoken finally.” The felisapi spoke at last. “You may call me Commander Kelih. What is your name, stranger, and why were you trying to enter our forest?” 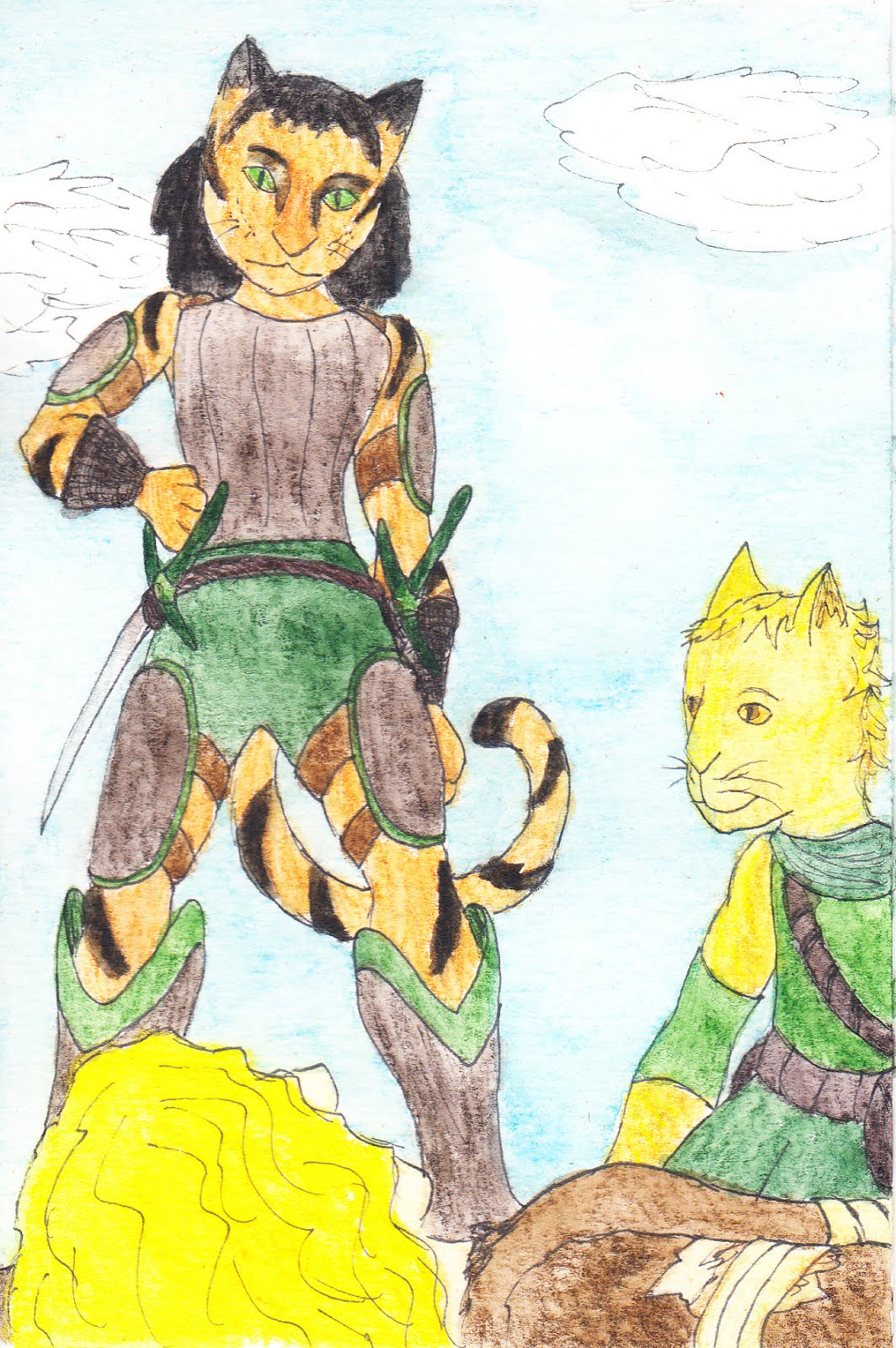 “Most call me Crant. Three days ago, I had a confrontation with some Eradicator initiates, though I didn’t know who they were until after I had killed a couple of their number. This wasn’t the first time I’ve gotten on the bad side of their organization, and felt I’d better find a safe place to try and evade them.” She gave a tiny shrug. “Obviously, that didn’t work.”

“And you are just as clearly in no condition to travel.” The felisapi commander mused. “Very well, Crant, you will be welcomed into Felisa’s Forest, and free to stay as long as you need.”

“Just like that?” Crant asked, surprised at the invitation. She expected to be allowed sanctuary only until her injuries healed.

“Of course. You are wolfen, and therefore Animkind. Besides, once the Eradicators realize you’re responsible for the destruction of one of their Hunting groups, they’ll have scouts combing the area for weeks.” Commander Kelih looked at the felisapi healer. “How soon can we move her?”

“Since I finished with the last bandage before I woke her up, just as soon as a stretcher gets here.” He reported.

A few minutes later, another healer arrived with the components of said stretcher, and they carefully slid the leather sheet underneath Crant before attaching it to the two wooden poles. As she was lifted off the ground, the woman saw that an entire squad of the cat warriors were dragging the corpses she had created to a pile for burning. The sight of the destruction made her suddenly realize something.

“My sword-” Crant started to say, but Commander Kelih, walking beside her, held up a paw.

“Already retrieved and cleaned.” She said. Crant nodded her thanks, and closed her eyes to relax. “Perhaps,” Kelih continued, “Once your wounds have healed, and your strength returned, you could put that sword to good use. Some of our villages to the north have sent disturbing reports of demon sightings...” The felisapi trailed off when she saw that the human had slipped away into sleep. “...But we can discuss that later.” She smiled, and let the healers carry the mysterious woman to their nearby fort’s infirmary.

Did you enjoy my story? Please let me know what you think by leaving a review! Thanks, Triscribe