Darkbringer would love your feedback! Got a few minutes to write a review?
Write a Review

When the ringing stopped, and the world came into focus once again, Kyle found himself lying on a luxurious canopy bed, sprawled out across pale blue silken sheets. Dazed, he looked down and found himself in the perfect female form which he’d spent so long designing; wearing nothing more than a thin camisole of white silken lace. Gently he lifted the top of the camisole slightly and glancing down, stared at the perfectly shaped curves of the breasts inside it.

“Status,” he said in a soft, gentle, melodic voice, and a game status window appeared. 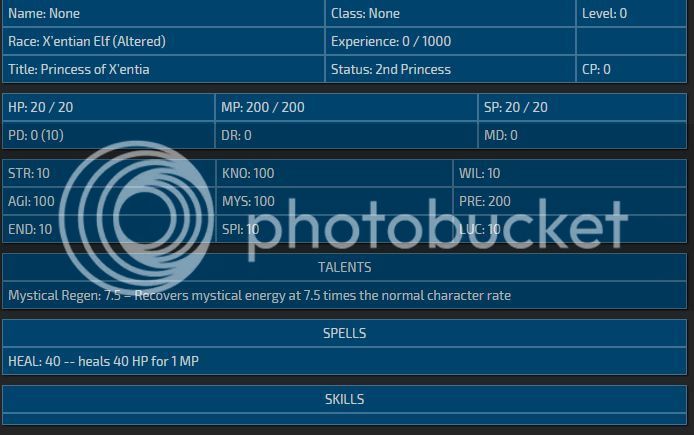 Taking a moment to look over the status screens, Kyle cringed slightly inside. Something had glitched with the character creation process, and he’d created a character who had no skills or talents except for an ability to heal, and quickly recover mana. With no fighting ability, and no defending ability, there wasn’t any way that this character was going to be possible to play!

“Log out!” He almost cried thinking about all the hard work he’d put into the character customization process to create the perfect beauty, and now it was all gone. The world faded to black slowly, and soon he was back to the blue screen hovering over darkness that was his standard virtual-OS setting.

“Winter’s Tale,” he thought to the OS, so he could pull up and restart the game. Feeling bad about losing all the time it took to make his character, Kyle didn’t see any other way he could proceed and continue with the game with the hopeless character he’d created before.

Slowly, the blue OS screen faded out, and the bedroom faded back into view. When he looked around again, he was once more back in the game. Logging in to Winter’s Tale took you directly to where your character had logged out last, and not back to character select!

“Oh… SHIT!” Kyle leapt up from the bed and almost fell over from the sudden shift in his body’s balance as his breasts swayed and bounced freely under the silken nighty. His ankles hurt, and his feet ached for some strange reason which he couldn’t fathom at the moment. “Log out to character select!” His slight feminine voice cried out, and the world slowly faded away and he reappeared back at the standard OS screen.

“No! NO! NOOO!” Kyle screamed at the OS window. “Pull up news on Winter’s Tale, deleting characters and making new ones!” He yelled at the OS and the screen flickered for a moment before popping up several different windows. Quickly, he studied them, and his heart sank in despair.

Winter’s Tale was designed to offer an “immersive character experience”, and as such they only allowed character resets every thirty days by something called a “legacy system.” He had to log at least thirty days playing time on his character before he could delete it and create another one. The only good news was that some of his original character points, wealth, and items could be transferred to the new character through the legacy system.

But for now, for at least the next thirty days, he was stuck playing a character without a single offensive or defensive ability! He had to play, if he wanted to do his job; and unfortunately, if he did his job well, people would learn to associate that character with the news reports that his grandfather’s company produced. If he got popular – and who wouldn’t want to watch a sexy little thing like his character play around – his grandfather might not allow him to get rid of it!

Too much popularity, and he might have to play such a worthless character forever. Too little popularity, and his grandfather might be forced to fire him from the payroll for not bringing in enough viewers. Kyle felt he was doomed, no matter what he did.

Feeling defeated before he even got started, Kyle called up the game once more. “Winter’s Tale”, he half-mumbled to thin air. Once again the OS screen slowly faded away and he reappeared back in the bedroom, standing as he had before. Strangely enough, his feet and ankles ached slightly again, for some unknown reason.

“Great. I made a character with arthritis or some other strange defect,” he mumbled melodically to himself. Glancing down, he didn’t see any reason for his feet to ache dully as they did. Gently, he lifted himself up and down on his tiptoes a few times, as the idea of pain of any sort inside a game was slightly odd to him, and strangely enough he discovered that standing on his tiptoes the ache disappeared. It was only when he tried to stand with his full barefoot upon the ground that he felt the mild discomfort.

Frowning slightly, he continued to stand on his tiptoes and look around the room. The bedroom he was in could be considered as nothing less than lavish. The floor was tiled in pale blue marble, the walls and ceiling were made of some flawless ivory stone. Rich, vibrant tapestries draped across several of the walls, and there were multiple wardrobes full of various bright and colorful clothes. A mahogany table was directly across from the bed, with a high-backed chair sitting beside it, and a huge silver mirror behind it.

The whole place simply screamed “RICH”, “IMPORTANT”, “POWERFUL” to him, and Kyle couldn’t believe it was a standard starting location for characters. Most games had the characters appear in front of some old mayor-type dude, who immediately wanted to give them a quest to get them to interact with the other NPCs and things around them. There wasn’t anyone like that in here, and when he’d looked at his status, he had a princess title?

What game lets you start as a princess?! They’d said that Winter’s Tale was a game unlike any other, and from his experience Kyle definitely believed that! Maybe things wouldn’t be go so badly for him, if he could command a knight to join with him and do the fighting while he healed them. Surely, once he earned a few levels and attained a class, he could pick up some fighting and defense skills and then things might not be so bad for him.

Getting ready to walk around to check things out, Kyle almost tripped over a pair of shoes which were sitting beside the bed. Even though he had an agility of 100, he was still having some issues with his balance and moving. The whole female body was something which took some getting used to, and trying to stay tippy-toed didn’t help any.

Slowly, he sat down on the edge of the bed and picked up the shoes to examine them. They were ivory white, silk cloth slippers, and they had long stiletto heels on them! Back home, they’d be called the “stripper’s heels”, as they were at least six inches in length.

“No way!” If that’s what he’d been wearing all day, that’d explain why his ankles and heel hurt! Laughingly, he slid one on each foot and then slowly stood up to try and sashay across the room. He’d always heard that it was almost impossible to walk in heels, but much to his surprise, he had no issues with them at all, and oddly enough his feet didn’t hurt trying to walk in them.

“Crap!” Kyle couldn’t help but complain again, as he thought about the issue. There were some strange customs in the real world, concerning shoes and society. In China, wealthy women of status used to bind their feet and completely reshape them so that they could wear smaller shoes and have tiny delicate little feet to show off. Apparently, there might be some strangely similar custom with the wealthy elves of status inside the game; sexy heels were the fashion, even to the point where not wearing them caused issues.

As he was wondering about how the heck he was going to be able to go adventuring while in such ridiculous footwear, the door to his room burst open and an old, wrinkled, human woman rushed in. She looked to be in her seventies, with frazzled white hair. Tears were streaming down her eyes, and she rushed up and hugged Kyle tightly.

“May the gods have mercy on your soul child. They’ve ordered your death.”

“My… death?” All thoughts about shoes instantly faded from Kyle’s head. What did she mean, his death?

“Aye. The council has declared you an abomination. The accident with your magic has changed you beyond the point where they accept you as one of their own anymore. Your father, the king, protested their decision and has been arrested. The whole palace is in an uproar, and they’re coming this way!” The old woman shoved a bundle into Kyles hands as she continued on, “Take this, and I hope the gods have mercy on you. This is the last task your old nan can perform for you. I pray you think kindly of me from time to time, lass!”

With a sudden movement, the old woman raised a silver blade and sliced it across her own throat. Blood poured from the wound, as armored men dashed into the room with swords raised. “Get her!” They screamed and charged as the old woman weakly brought a crumpled looking page to her throat and held it against the wound. The men had almost closed the distance as a bright light erupted from the paper, and the world faded away.

When the light had dimmed, Kyle found himself elsewhere once again. This time he was in a dark forest somewhere, with no idea of where he might be. The old woman crumpled and then shimmered and disappeared, leaving a single copper coin where she’d last been. With her dying act, she’d teleported him from the palace and elsewhere.

Unfortunately, Kyle had no idea where that elsewhere might be. Or, how he was going to survive being in it with his lack of talents!