NamePendingCreations would love your feedback! Got a few minutes to write a review?
Write a Review

He can’t believe he’s doing this.

How did he let her talk him into this?

“How did I let you talk me into this?”

Cain can’t see Mary, but he can hear her voice.

“Oh don’t be like that. This’ll be fun and enlightening.”

It’s coming from the other side of a large slab of wood stabbed into the ground between them. Longinus did the honors of building a makeshift confessional out of parts of Balam’s barn. Thanks to Cain’s mishaps they had plenty of debris to work with.

“Get on with it then,” Cain groans and fidgets in his seat. He could already feel the splinters in his ass.

“Are you even gonna try,” Mary asks.

“I have to be honest, right,” Cain retorts.

“I see. Well, in my line of work enthusiasm and faith are a must and I’ll have you know I can be quite infectious. I’m sure I’ll get something out of you before the sun comes up.”

“Do you hate talking to me that much,” Mary asks.

“You totally implied it.”

Cain leans back, crosses his arms and sucks in some of that hillside air. “Alright. Sooner I confess to somethin’ the sooner we’re on the road. The sooner I’m onto the next member of The Syndicate-”

“The sooner I’m at Jesus’ safe haven with my son,” Mary interrupts. 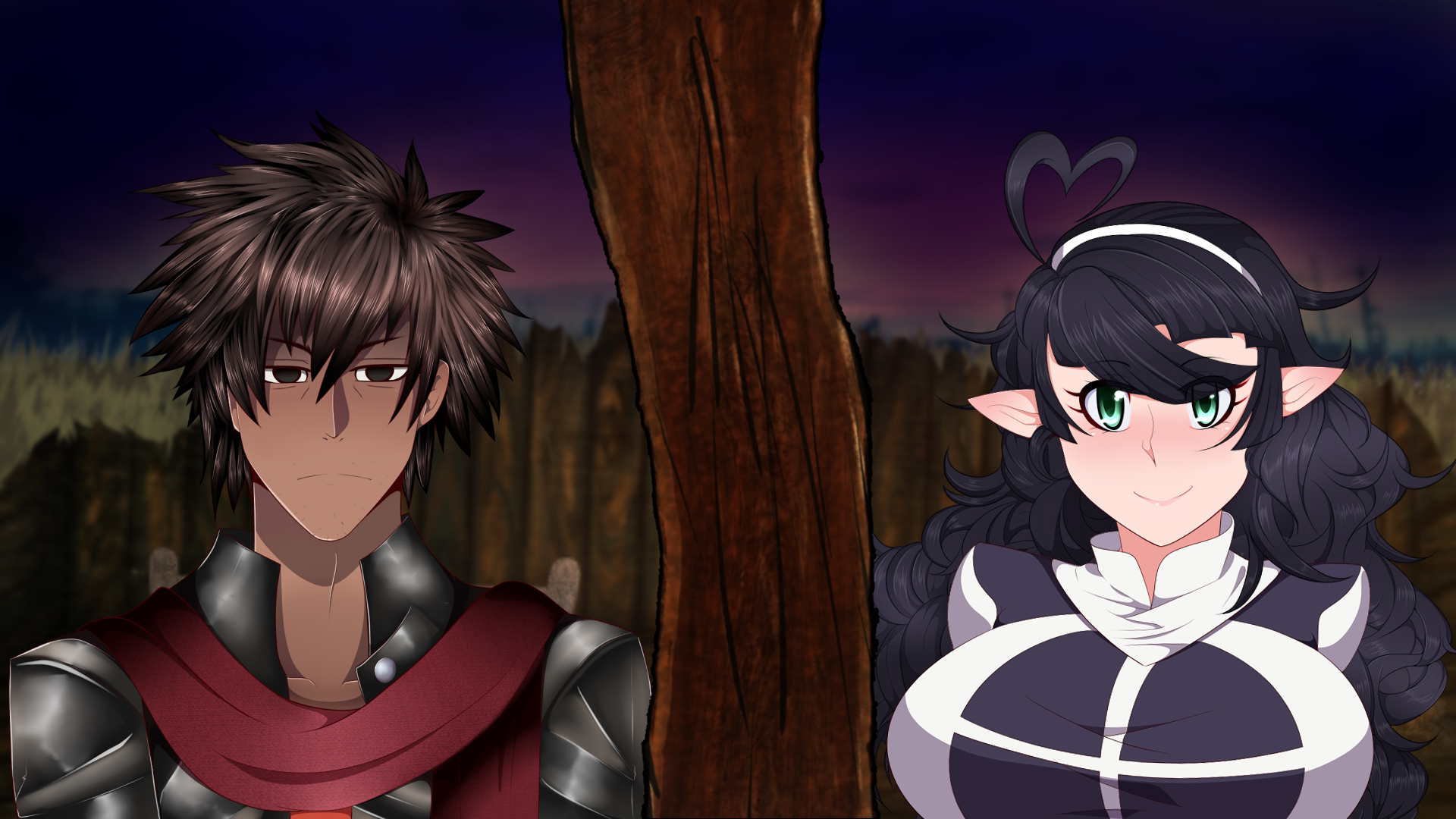 First confession Cain should make is that he hasn’t even tried plotting a course to Christ’s settlement. Not like he doesn’t believe it exists, he just doesn’t know how wise it’d be for him and his crew to drive up to a holy man’s doorstep. That and he isn’t keen on handing over the last mortal to a house of gods especially after all that Revelations bullshit went down.

“Y’know, this might be difficult, what with me knowing who’s on the other side.” Cain knocks on the makeshift border.

He hears Mary clearing her throat. Then, in a gruffed up voice, she replies, “Nonsense. Speak your sins, my son.”

Then, in an even cheesier voice, Cain responds with, “Of course father. I shall confess.”

They laugh then go silent. Another confession comes to mind. Actually, a lot of really obvious ones spring up. They come to life in the form of hazed out memories. He steals, he kills and not once does his expression falter. There isn’t a moment of hesitance, a little nibble in the back of his mind that says he probably shouldn’t hurt these people. No, for a long time all that mattered was surviving. For an even longer time, all that mattered was how bad he’d been hurt by the powers that be and how he’d make them pay something fierce for what they did to him. For the curse they put on him.

Fuck it. Why should he have to confess when God made him this way. Made in his damn image alright. So Cain gets angry and he decides to be a bit of a dick. Nothing new.

“One time I ate dessert before dinner. Oh and another time I tracked mud through the house and blamed it on a mule. Pretty bad stuff, right?”

“Mr.Cain.” Mary’s voice catches him off guard. “I’m trying to help you okay? So if you really don’t want to do this. I can’t make you.”

Why does her voice have to be so damn sweet? It lulls him down to the point of rationality.

“Truth is I kind of like talking about that stuff,” Cain says and even though Mary can’t see him he turns away.

“What stuff?” She’s quick to reply. Like she wants to hear more. Like she cares what he has to say.

“I dunno. About when I was a kid. I guess. Before I...” A tightness in his throat stops him. A lump, like he felt that day. He squeezes at his knees and he’s nervous all over again.

A minute goes by and he doesn’t say anything. So she calls out, “Mr.Cain?” And his ears perk up.

Another minute goes by and she doesn’t say anything. So he calls out, “Mary?” And follows up with,“everyone knows what I did.”

“Are you sorry?” Mary’s voice returns.

“What?” Cain looks at the wall.

“Are you sorry,” she repeats, in the same tone.

“About ‘it’? Well, It’s something that stays with you, ya know?” Cain looks at his hands. “And like, I know what I did was wrong, and people serve sentences, life sentences for this kind of thing. And I’m more than happy to do the time. But I’ve kept count best I could and I’m still here. I’m still here.”

“And I’m afraid I’ll always be here. It doesn’t matter what puts me down. Others have tried. I’ve tried. And I just can’t. I’ve seen so much, been through even more. Sometimes it’s like I’ve stopped feeling. Long stretches where nothing matters and I think, this is it. Everything is gonna end and I’ll still be here. There were so many scares. So many wars. Then all of a sudden it happened. It really happened. But it wasn’t some sickness or some bomb or anything anyone thought it would be.”

Something grabs his gaze and forces it to the heavens.

“It was him. It was their savior. Their father. Their love. Their faith. The sky opened up and killed every last one of them. But not me. I’m still here.”

Mary isn’t saying anything. So he’ll take that as a cue to continue.

“So when you ask if I’m sorry I get a bit confused. Because I stop and I think. Well, I’ve got nobody to apologize to, because I’m sure as hell not gonna look up and ask forgiveness from a mass murderer.”

“Fuck this,” Cain scoffs and stands up.

As he steps around the barrier, he hears Mary’s voice.

“Wait,” she cries. “What if you could see him again? Your brother?”

Hard to deny it, but those words do stop him. The thought, pleasant as is it is, poisons him. Pivoting around on one foot, Cain presses his hand against the wood and lets out a heavy sigh. Why is she doing this? What’s her angle? What’s she got to gain?

“Sounds nice,” Cain says with a nod. “But I’ve had a long time to come to terms with the fact that there are no do-overs.”

Feeling like he’s said enough on the matter Cain tries to take his leave once more. He gets maybe three or four steps away before he walks back over and sits down in his seat.

Knocking on the wall, Cain says, “One more confession.”

“Y-yes, what’s that?” There’s some sadness in her voice. Cain couldn’t mistake it.

“If I could, I’d be with you. We’d live in a little house, and I’d make sure nothing bad would ever happen to you or Adam. For every day that’s been hell for me, I’d give you two one that’s like heaven and so much more. Then, instead of trying to find a way out, I’d try my hardest because I’d have something to live for. Because you make me feel like it’s okay to like myself.”

There’s no need to hear her response. During a confessional, the priest isn’t supposed to pass judgment. So when he’s done speaking his mind, Cain stands up and walks to the car. If Mary really is bound to the word then she can’t hold any of this against him. In fact, the two of them may never speak of this again.

And they don’t speak. Not for the rest of that night. Not for much of the next day either. By that second night, as foolish as it sounds, Cain starts to suspect she may never talk to him again.

They raid old grocery stores for canned foods and other things Adam can eat. Cain watches Mary leave Orison on the counter so she doesn’t have to feel guilty about stealing. He waits until she leaves before he pockets it after her.

Together Longinus and Mary go over the map and plot a perfect course that’ll take them through Jesus’ rumored safe haven on the way to Astaroth.

Dusk comes and Cain finds himself glancing at her. With Judas and the baby both fast asleep, and Longinus lost in his duties as driver, Cain watches Mary. She stares down at her baby and her emerald eyes hold all this uncertainty. There’s a chance that Cain’s to blame for that. If he shook this woman’s faith or stole any of her innocence then he wouldn’t forgive himself. Not that he was ever planning to.

It’s fast. Red. Hot. Bright. Cain sees sparks split the car and watches as Mary and her baby fall away from him. He lunges towards her, both arms open. As he crosses the threshold above the pavement that whizzes by beneath them he sees a man. A tall man dressed in a dark cloak with a face like a skull. His arms hang taut at his sides and something red dances in the air.

As gasoline splashes against his face and his arms wrap around Mary, Cain locks eyes with the image of death before him. Through the evening breeze, he hears the man’s voice and once again the lump returns to his throat.