Claire Boorman would love your feedback! Got a few minutes to write a review?
Write a Review 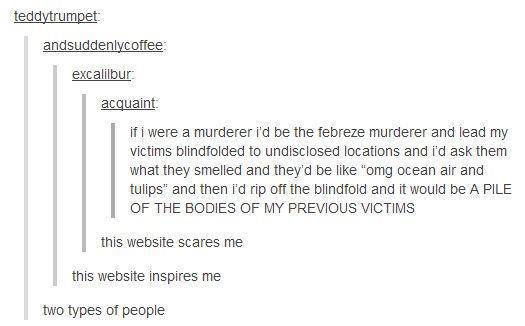 I opened the door and looked around, making sure everything was in place. I'd been preparing this room all week for my new guest to witness once again just how powerful the scent of Febreze was. It was dark in the room; I'd boarded up the windows so the only light in the room came from a single old lamp that flickered as it dangled from the ceiling. Satisfied that the room was ready, I lead a young brunette through the door which I locked behind her. "You know what this is, right?" I asked her as I brought her to the centre of the room.

"Yes," she replied, sounding both nervous and excited. "This is a Febreze advert, right?"

"Yup, you don't have to worry," I smiled though I knew she wouldn't be able to see it. It was probably more out of my own pleasure at the thought of what was to come. "What can you smell?"

The girl sniffed the air. "Clean air and lavender," she said, smiling at the scent.

"Really?" The power of an air freshener never ceased to amaze me.

"You have a good nose. Would you like to see what's in the room?"

She grimaced, knowing that what she was going to see wasn't going to be nice, but nodded. I grinned, my body trembling with excitement. In one swift movement I ripped the girl's blindfold from her eyes and revealed to her a pile of the bodies of my previous victims. They were scattered around the room, some more disfigured than others and all varying in stages of decomposition. It would've really smelled if not for the Febreze which I'd sprayed around the room in massive quantities. I think I used up three cans.

The girl screamed and covered her face with her hands in attempt to shield herself from the horror. "What's wrong, love?" I asked, grinning so hard my face hurt. I couldn't keep the hint of madness out of my tone. "Do you not like the smell?"

The girl continued to scream and ran to the door. She pulled at the handle desperately but her efforts were futile, I'd locked it earlier and the key was tucked away in the inside pocket of my jacket. "You won't get out that way, love," I said, enjoying the look of terror in her eyes. "I locked the door." Obviously.

The girl finally stopped screaming and turned to face me, keeping her back pressed to the door. Her legs were trembling like leaves in the wind and I had a feeling she'd blow away at the slightest breeze. "W-w-what do y-you want w-with me?" She managed to force out with a shaking stutter, her voice little more than a pitiful sob.

"Don't you know who I am?" I sighed, annoyed that I wasn't infamous yet. "I'm the Febreze Murderer," I pointed a finger at her, "and you're my newest victim." I turned and walked over to the nearby body of an older man whom I'd killed sometime last week and pulled a knife from where it was embedded in his face. The girl was sobbing and crying again, calling for help and begging for her life at the same time. "It doesn't matter even if you beg for your life," I said, smiling to myself as I twirled the knife in my hand. I loved this part: the part where they cry and beg and offer me anything I want. A businessman had once offered me a large sum of money in exchange for his life but I refused. They just didn't understand. It wasn't money or sex that I wanted. I didn't want to 'send a message' to anyone. I kill because it's fun. It's exhilarating.

Killing this girl was almost as fun as watching her cry and beg. Her screams were like music to my ears as I dragged her down the path to a torturous end. I can't wait for the next one...

Did you enjoy my story? Please let me know what you think by leaving a review! Thanks, Claire Boorman

Joanne Love: I like the plot and all the sex scenes my only complaint in the spelling and occasional bad grammar I would probably recommend this to my sister cause she’s obsessed with lycans

Read Now
Sleeping with a ghost by J. A. White

Kittie Kat: This was a well written story. However, the ending was abrupt and left me feeling like there was unfinished business. This seemed like a good start to a book but I mean the story was well told and creepy enough. It was great you can feel the chills and smell the blood and fear all around them. I ...

amberspicer11: Great job writing this can't wait for next chapter

Scarlet Smith: It is a fantastic book. Actually loved it. It is one of the best books i met with my interest

kashasmith181922: This book hooked me and I can’t wait to read more😍

Gracie Sanchez: Not bad. A couple of grammatical errors but over all, a good read. I would read the next in the series.

Cristal Bollinger: It's a different take on werewolf stories.

Read Now
Killers in the Dark by Lekisha Hebb

Lily: This story is very good and has good action chapters.

yana: such a thrilling chapter !! can't wait to endulge myself into more and be amazed !

Alexiana: I love the plot. I wish Mike will just break up with his girlfriend and start a relationship with Emma, that will be freaking adorable. I also wish that Emma will have some self confidence and explore a little bit more. Other than that a great story.

xRaex: So far an interesting read

Samantha Kulasinghe: So horrible experience she got Feeling so sorry for herI hope in real life such things are never happened