Which, for others that knew her, was next to impossible. Speechless was not a word to describe Tracey. Tracey was a quick-witted, sharp-tongued young lady who almost always had some sort of banter or another to supply to any situation.

And yet here she was—speechless.

In front of her was the familiar shop of which she knew well. For five years, she’d been working at this shop, and for almost twice as long practically lived in it. Here she would start early in the morning, opening the shutters, lighting the gas lamps, and checking the motor-mail for the daily letters. Sitting behind his desk, Mr. Porter, her guardian and employer, would be well underway in his own morning routine. Only this morning, however, Mr. Porter wasn’t there.

The lamps were already lit, much to Tracey’s surprise, and the door and shutters were wide open. And yet, this was not what baffled the young lady so. As she stepped inside and cautiously looked about her, she could see nothing but pure disorder. Papers were strewn across the floor, filing cabinets were half-opened, and several books’ pages looked as if someone were frantically rifling through its contents. Tracey softly gasped as she took in the chaos of the room. 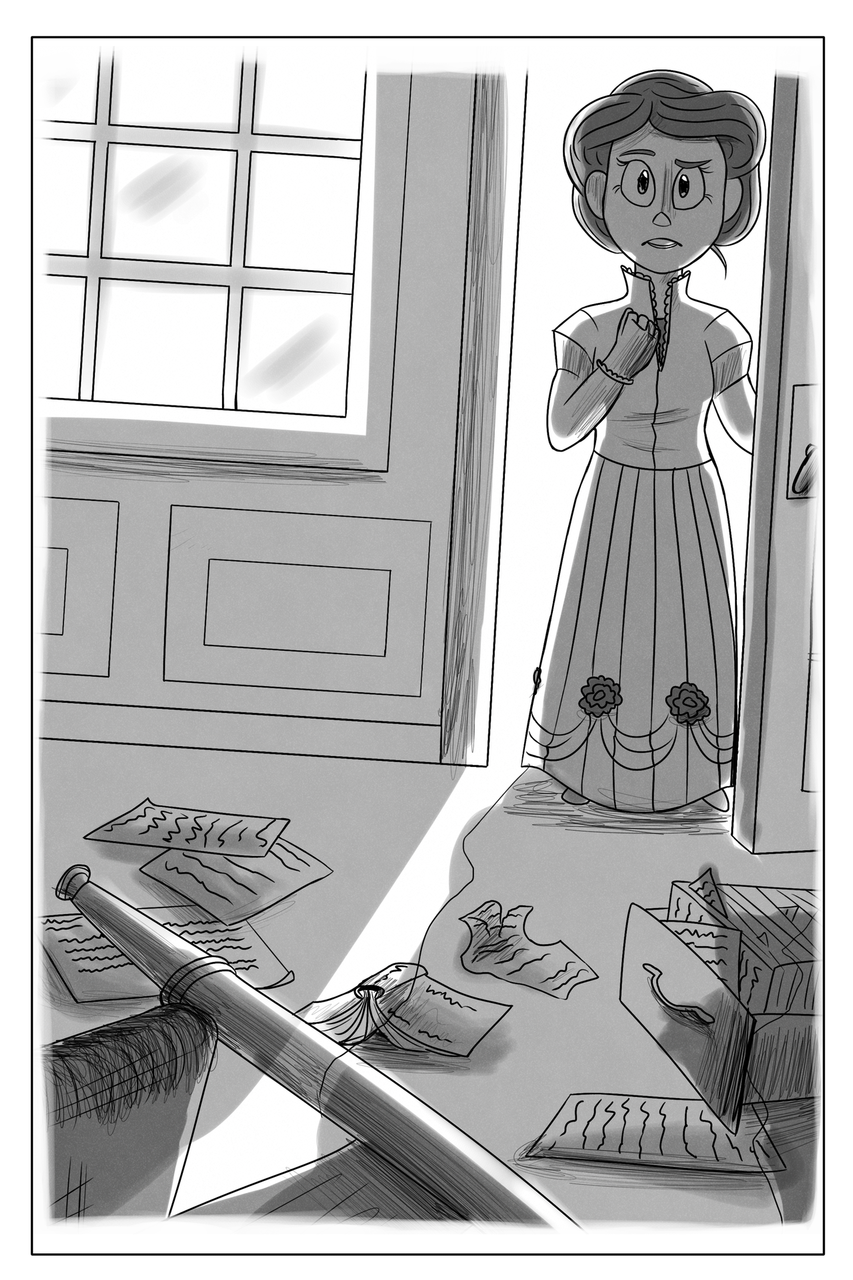 A robbery? she thought. Further inspection proved that she was alone in the room. She quickly checked the gas-powered safe and snatched up her inventory clipboard (thankfully still on its hook on the wall). A review of the room resulted in nothing—nothing was stolen.

“Well,” said Tracey, the first word she uttered since arriving at the shop, “What’s one supposed to do in a situation like this?”

She checked once more to see if she may have missed Mr. Porter. Up in the attic. Back in the delivery room. Under the desk, even.

“Hello...” Tracey muttered as the light reflected on something below the desk. She grabbed the item and lifted it into the daylight. “Mr. Porter’s spectacles?” Tracey became alarmed. He could hardly see two feet in front of himself. How did he manage to leave without them?

Cl-clunk. The motor-mail rolled to life. Tracey spun around. I’d forgotten about that thing! She watched as a solitary piece of paper drift to the receiving port. Strange... Tracey cautiously took up the paper. On it was a solitary message:

Tracey: I am on vacation. I will see you tomorrow.

And below, was a rather crude signature from Mr. Porter. “No, that’s not right!” Tracey exclaimed as she searched through the rubble for Mr. Porter’s calendar. When she finally found it, upside down and near torn apart, her suspicions were confirmed—nothing on today’s date! “I need the constable,” Tracey said, her lips tightening into a small furrow. I don’t know what’s happened, but he’s clearly in danger.

Suddenly, the paper in her hand began to heat up. “Wha-,” she began to say; but was soon cut off by the paper suddenly...well...going up in smokes. Literally. “Combustible paper?” she gasped. “That was made illegal years ago!”

Combustible paper, dear reader, was a craze that died as quickly as it had started. A large company experimenting with ways in which they could monetize steam-powered technology soon stumbled upon a rather curious invention: paper that could vaporize at a set time. Suddenly everyone wanted their hands on combustible paper—to spring a joke on someone’s day, to write a secret message, to hide incriminating evidence, and increasingly devious reasons. Unfortunately, unsolved crimes spiked as a result. For this reason, the High Constable of Dnalgne shortly banned the use of combustible paper and imprisoned anyone in possession of it. Understandably, it soon became the most unpopular product out there, to the sad demise and bankruptcy of the company responsible for its creation.

And now, poor Tracey, with the only shred of palpable evidence of a crime that she might have had gone, decided that Mr. Porter may indeed be in danger. Well, thought Tracey in dismay, at least I have these spectacles. And a break-in to report.

Tracey Higgenbottom shut off the gas lights, closed the shutters, locked the front door, and hurried down the foggy Mondon streets to the High Constable office.

Annie: I absolutely love this story and binged the first 2 books in a day. Truly and seriously recommend reading this book you will not regret it. The plot is outstanding and the characters are so strong. I can’t wait to see how it progresses

Read Now
HIS by Ivybrownie

Read Now
His lover by Ivybrownie

Aa'Riah: Uhhh i liked the first book and i really didn’t like the main character love intreats personalities but i’ve grown use to it.

ROMELYN: Great story i love it much,can i request can you make a bokk two of it?

Annoying August: What can I say? It was amazing, such a good twist and turns.Tom maybe wasn't fully innocent, but damn, the best friend?

Mou🍯: Liked the way the story started and took its turn. Was thrilling and exciting, the way it was ment to be. It was a good read. Hope to see more of your work Author 👍

Read Now
I See You by Undefineddd_

Janet: Good plot, very bad writing and punctuation, sorry. I read through all that and enjoyed the book. Thank you.

Taylor: I was really enjoying this book. It’s crushing to see chapters were removed and moved to a different site that I can’t afford 😔. These stories have been helping with my depression and anxiety. So I’m just currently waiting for the author to put it up on here again completed. I would definitely r...

Prettygirljada123: I loved how the story turned out, and how you made it more interesting and made me want to keep reading

Hobishi Jung: It's still hard to deal with things going on.... The way evrything turned out so soomthly.... Everybody has their own definition and way of LOVE.... Im in love with author's brain rn😭💜

Read Now
A Mistake by Creativeminds01

hananehamdaoui21: Love it so much ❤️ i can't wait to discover more of it, and i love the fact that they speak Frensh and Arabic, because i do too, and i can't wait for the main characters to be together ❤️

Read Now
The Monsters We Hide by Jadlynn Hagler

Fiona Walker: Loved the book but hated the ending 🤷‍♀️