(Some) Truths Are Revealed

“Wow, will ya look at this place!” Charlie exclaimed as they stepped inside. Since the eventful morning and afternoon, Tracey had not gotten a chance to tidy the office from the evidence of the previous night’s event. Each person looked about in shocked silence at the piles of paper everywhere. Bentam cleared his throat, looking embarrassed.

“I…can see why you had cause for concern,” he finally said. “I apologize for not taking your case gravely enough, Ms. Higgenbottom.”

“All of this mess…what were they after?” Harriet asked as she tried to straighten a misshapen stack of papers on a table.

“I wish I knew,” Tracey sighed. “Considering we handle mostly paperwork, it could have been anything.”

“Is there no inventory?” Bentam piped.

Tracey shook her head. “That would defeat the whole purpose of a Keeper. We keep secrets. There are no use keeping secrets if we document what they are in easy-to-find files.”

“Noted. Now, shall I gather statements?” he said as he set down his stack of papers and pulled a pen and notepad from his pocket. “Let’s start with you, Ms. Higgenbottom, as you were the first to find the scene. Time and description.”

“Sometime this morning, I’d say around 7 in the morning? I saw the room in this condition, and no door was shut.”

“I see…including the front door?”

“Did you find any suspicious people near the scene or any objects left behind?”

“His glasses,” Tracey finally said, pulling out the spectacles from her pocket.

“And this handkerchief,” she rushedly added, pulling the cloth out.

“It never came up,” Tracey replied.

“The spectacles are not news to me, Ms. Higgenbottom. However, that handkerchief is,” Bentam said, leaning forward to look closer at the cloth. “Where was this when you came in this morning?”

“Here, I presume. The constables gave it to me. I suppose he had assumed that it was my own…but I took it because I thought it might give me a clue.”

“Proceeding with cases without the High Constable’s approval could land you in prison, Ms. Higgenbottom.”

“It wasn’t as if the High Constable was about to open my case either, wasn’t it?” Tracey retorted.

Bentam blinked. “You may have a point.” He reached forward and took the handkerchief from her hand. “This kerchief has initials on this…RN. Do you know who this could be?”

“No,” she said with a shake of her head.

“I’d have asked you that if you’d’ve mentioned that handkerchief earlier!” Mittie said indignantly, putting her hands on her hip. “Is that what you’ve been hiding in those pocket o’ yours?”

Bentam sighed before turning to Mittie. “May I get your statement, Mittie?” he asked. “I suppose you were the next person?”

“Well, I actually was there at the time of the plagium,” she gravely said.

“Plagium?” she repeated. “Ya know, kidnapping? Thought that was an official term…”

“Oh, yes,” he said with a slow nod. “However, plagium means the crime of kidnapping a child.”

“Ooooh, that makes sense. Well, anyways, I was there at the time of the kidnapping.”

“Good, an eyewitness.” He scribbled on the paper. “What time did this occur, and what did the perpetrator look like?”

“Ehm, it was ‘round midnight,” she started. “An’ the perpetrat’r was tall an’ slim. Actually…I think I saw ’im today.”

Tracey froze. Did we come that close to Mr. Porter’s kidnapper? “Why did you not say anything?” Tracey said.

“Well, he was a little different close up than when I saw ’im from a distance. Actually…he was a lot more intimida’ing close up. And not as slim as I ’ad thought.”

“What is his new description?” Bentam asked.

“Mhm. And can you tell us who exactly you saw, and where?”

Mittie shuffled, her eyes darting around the room. “At Mr. Starr’s residence.”

“Really?” Harriet piped from a corner, where she had situated herself and begun tidying up the disorganized papers.

“Was it Mr. Starr?” Charlie asked from his seat at the window, where he had sat shortly after their entering the shop.

“No.” Mittie shook her head. “It was…what was his name? The chef, his name was kinda strange.”

“Yes, that’s it! It really startled me to see ‘im there all o’ a sudden, so I was really frigh’ened. Sorry for not sayin’ anything sooner.”

“Interesting,” Bentam said. “I believe we have a solid case here. Did you see where they left to?”

“According to where I pointed out to Trace, it was the Undertown. That’s how we met Harrie and Charlie.”

“You’ve been doing a lot of legwork, I see,” he said, nodding to both Tracey and Mittie. “Now, Harriet and Charlie. Can you both tell me what you saw?”

Charlie shrugged. “I didn’ see anything. It was really just Harrie.”

“Uppertown?” Bentam frowned. “At what time?”

“That’s what I said,” Charlie said with a shrug. “It’s an hour away from here, there’s no way they could have reached over there unless they had a steam car or somethin’.”

“Mittie,” Bentam said, turning to her, “Did you hear any loud engines in the area when they left?”

“Is it possible for steam cars to be quiet?” Tracey asked.

“Nor is kidnapping,” Charlie pointed out. “Don’ think they’d care ‘bout somethin’ like that.”

“That is true.” Bentam sighed. “Is that why you were at Mrs. Pinot’s residence?”

“Yes, we were following Harriet’s lead,” Tracey said. She reached in her pocket. “I think I can confirm that Harriet saw Mr. Porter last night.” Out of her pocket, she held out the ring that she had found at their place earlier. Harriet’s face paled. 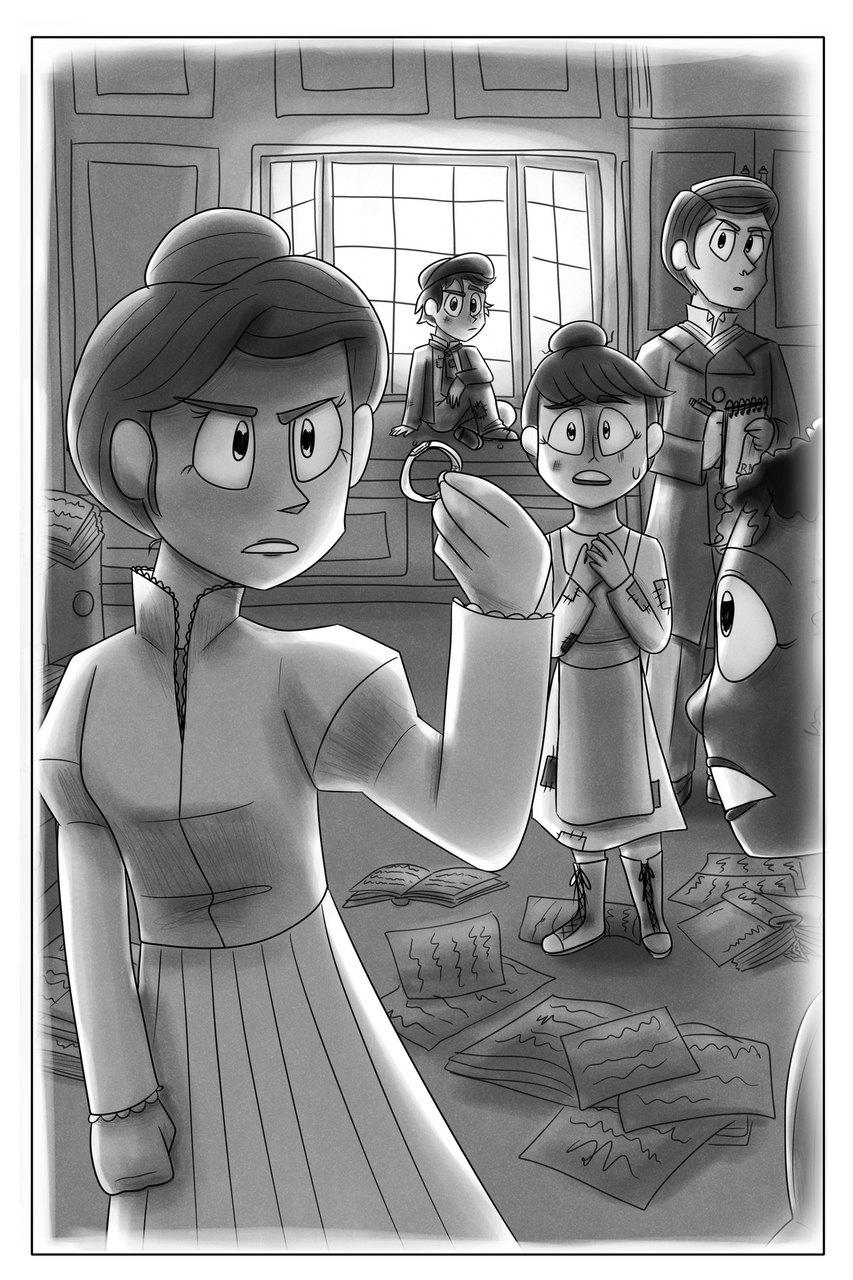 “Where did you get that?” she quivered.

“How much have you been hidin’ in those pockets of yours?” Mittie exclaimed. She leaned loser. “Say, that says Remington L. Porter. How’dya get your hands on this, Harrie?”

“…he dropped it,” she finally replied. “I’m sorry, I was going to pawn it and try to get some spigots. Maybe 20 or 30 spigots. It would have gone far, a few months if I stretched it… I didn’t think it was important, really!”

“You didn’t see the inscription inside?” Tracey asked.

Tracey frowned. “I understand why you may have done this, dear. I just wished you would have said something about this sooner instead of trying to hide it. This ring is very important. I—.” Tracey stopped herself.

“You what?” Charlie asked.

“I gave this to him myself,” she continued, quieter.

“Were you close to Mr. Porter?” Mittie asked.

“Um…you could say that, yes. He was my guardian when I was a child.”

Tracey looked around at everyone. She was half-expecting for there to be disapproving stares or, worse yet, more questions about him. Instead, she was met with a surprising amount of understanding gazes and polite nods. She blinked, taken aback by the courteous reactions. “Um…,” she awkwardly started. “But yes, the ring is important. I’m just glad that we can pin down Mr. Porter being in Uppertown around 12:30 last night.”

“I find it surprising that Mr. Porter was at Mrs. Pinot’s place by means of Rollo, however,” Bentam said.

“Mr. Starr and Mrs. Pinot both have an ongoing feud. It’s rather public, actually.”

“I’m not sure. It’s just public knowledge that neither of them get along. So for his cook to be going to her home…it’s rather strange.”

“It could be that the feud only goes as far as Mr. Starr and not his staff?” Tracey offered.

“Why were you at Mrs. Pinot’s, anyways?” Charlie responded.

“Just some bank issues in her records,” he waved off. “Nothing important.” Bentam scanned the notes on his pad. “So for suspects, there’s Mrs. Pinot, Rollo the cook, and perhaps the pamphlet distributer Ms. Halpin. Between the three of them, however, I believe that Rollo may be a more solid lead.” He raised the handkerchief in his hand. “Do you see these initials?”

“Correct. Mrs. Pinot’s first name is Corsetta, and Ms. Halpin’s is Elizaveta. The cook however is Rollo. If we can figure out his last name, we may be able to tie him here.”

“And how are we supposed to do that?” Charlie asked as he sauntered to the back of the room.

“Well…we could ask him—,” Tracey started.

“No!” everyone replied in unison. Tracey blinked.

“Ms. Higgenbottom, both Mrs. Pinot and Mr. Starr claimed to be your clients, and yet you don’t remember them? Could you verify if they are or are not your clients?” Bentam asked, suddenly handing the handkerchief back to her and walking to her desk.

“Of course!” she said, hurriedly rushing to the desk and unlocking the top drawer. She pulled out a clipboard with a list of names, dates, and times. The two of them silently scanned the pages, flipping through each one.

“No, they don’t appear to be on here,” he said. “Would they have gone by any different names? Anything that matches ‘RN’?”

“What if Mr. Porter had private clients?” Mittie offered. “They could have seen you then, without you signing them in?”

“That’s…a possibility,” Tracey slowly said. “That has happened a few times, where the customers would enter without stopping at my desk—.”

“That should do it!” Charlie exclaimed suddenly, popping up from behind a desk in the back of the room, a letter opener in hand.

“Charlie?” Tracey gasped. “What are you doing at Mr. Porter’s desk?”