“Right this way, ma’am.” The receptionist in the High Constable office led Tracey from the room in which she had been waiting in. “He’s in there,” she whispered, pointing to an office towards the back. “His name is Bentam Berkley.”

“Why are we whispering?” Tracey asked, glancing to where the receptionist stood. In her place was vacant air, and in the distance was her quickly retreating figure. “O...okay?” Tracey muttered, heading towards the office.

The hall’s light filtered into the office, falling just short of the imposing figure which sat behind the desk. Tracey paused. From what she could see, there were two hands in a flurry across the typewriter in front of them, arms clad in a navy blue jacket, a neck that was tightly wrapped in a starched collar and necktie, and two piercing eyes looking at her from the darkness. “Are you going to stay there and block my light?” the figure gruffly said.

“O-oh, I beg your pardon,” Tracey said, quickly stepping into the room. “Constable Berkley, I suppose—.”

"Mr. Berkley will suffice, miss, and please take a seat,” he said, all the same typing. His eyes returned to his paper.

Tracey blinked. Well, then! She obediently took the offered—or rather—vacant seat and waited for him to finish. She watched as he busily worked, occasionally pausing to look at notes beside him. Steam silently puffed out of the side of the typewriter, keeping pace with his typing. 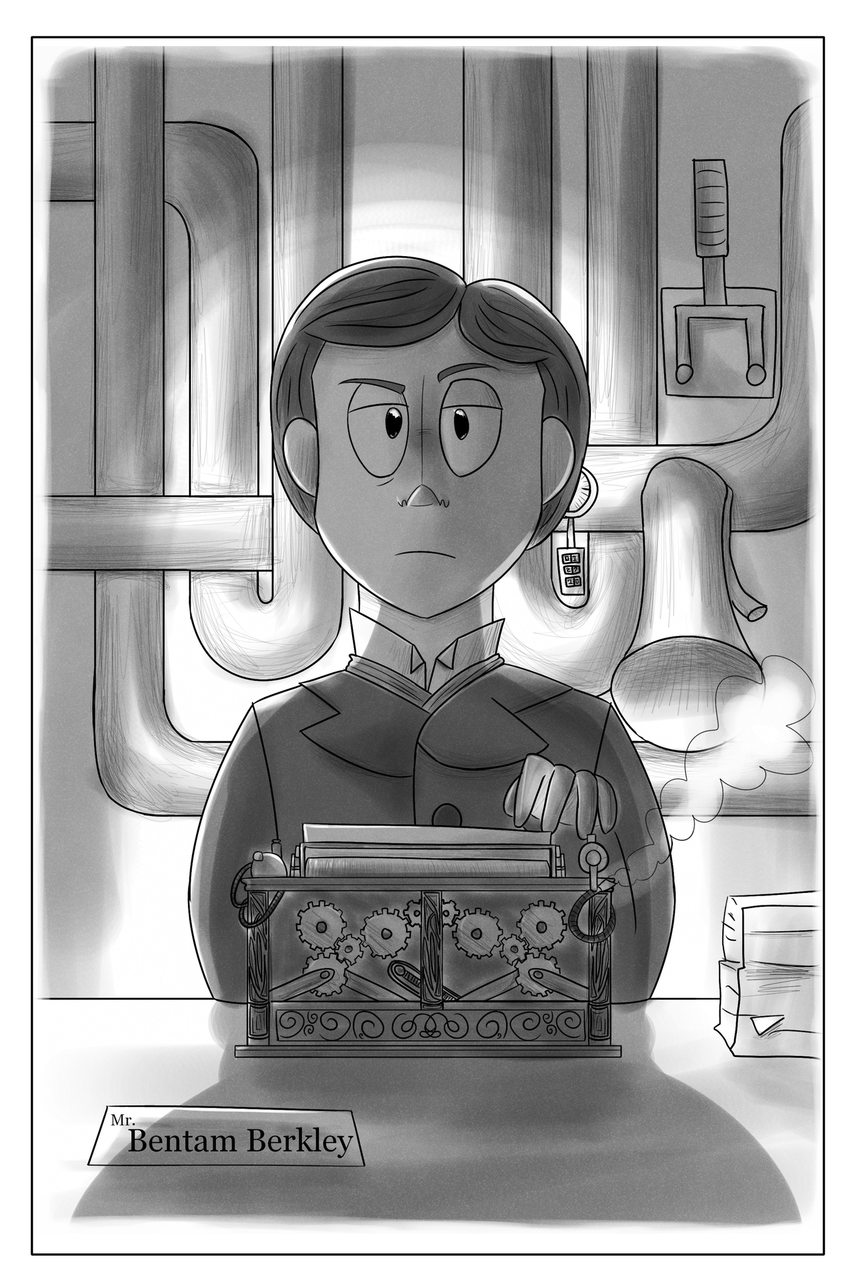 “I am not the High Constable or even a constable. I’m the records keeper,” he said, breaking the heavy silence. “Name?” he asked.

The typewriter’s keys continued to clack away. Tracey fidgeted. “Well?” he snapped, his eyes darting up to her. “For what reason are you here today?”

Tracey bit back a rather biting remark. “I’m here today,” she started, “I’m here today to report a break-in and kidnapping.” Silence. Mr. Berkely continued typing for another minute before finally stopping and taking the paper out of the typewriter. He then rolled it up and put it into some sort of tube behind him, pulling the lever, and in a puff of steam was carried elsewhere. He turned to face her again.

For the second time that day, Tracey Higgenbottom was speechless. “I-is that all?” she stammered. “What do you mean ‘is that all?’”

Mr. Berkley sighed. “Do you have any more information, ma’am? It was a break-in. Where, what time, and what was taken? There was a kidnapping. Who, any suspects, and what leads you to believe so?”

“Well,” Tracey said evenly, “The break-in was at my place of employment. I don’t know when it occurred, perhaps from last night or earlier this morning? The kidnapped is my...” she paused. “My employer, Mr. Porter. I don’t know who would kidnap him, but it possibly could be because he’s a Keeper.”

“A Keeper. It’s a popular profession in Mondon nowadays, they’re in charge of keeping things for customers, like jewelry, money, or even just a note—.”

“Oh yes, Non-Bankers,” he interrupted, his interest flitting back to the stack of paper next to him. “Our constables are very familiar with the sort.” He took up a nib pen and scribbled. “Break...in...at...” He looked up. “What’s the establishment name?”

“Porter...Keeper...Shop,” he put down the pen. “Alright, I’ll send the document through and you’ll have a couple of constables at the business in about an hour. Thank you.”

Tracey sat for a few seconds. Mr. Berkley loaded a fresh sheet of paper into the typewriter and began typing again. He paused, glancing up to Tracey. “Thank you, Ms. Higgenbottom.”

Mr. Berkley paused, raising an eyebrow. “What do you mean, ‘that’s all?’”

“What about the kidnapping report?”

“What kidnapping? As far as I can tell, there’s only been a break-in.”

“Did you try calling him via steamphone?”

“And even if no answer, did you check at his residency for him? Perhaps he’s ill.”

“That would not be normal for h—.”

“Alright, and even so, what could possibly cause you to jump to your conclusion?”

“Do you know how many kidnapping cases we have reported here in Mondon?” Mr. Berkley leaned forward. “Five. Hundred. A week. Every week we have kidnappings reported. Do you know what would have happened if we followed each lead without evidence? A vast majority of these types of reports end with the person popping back up as if nothing happened! And do you know what that means?”

“A waste of resources. Constables sent out on wild goose chases while there are real cases to pursue.” He points to a paper on the wall behind him. “Take him for example. Famous actor plagued with fake performances using his name.” Tracey paused to look at the poster. On it was a picture of Jon Starr, a well-known stage actor at the time. “We should be spending our research finding this out, but instead we spend time on cases like yours.”

“Yes, but I have evidence!” Tracey held up Mr. Porter’s glasses. “I found these under his desk.”

Mr. Berkley squinted at them. “What is the significance of these?”

“Did it ever occur to you that he may have a spare?”

“Mhm.” He leaned back in his chair. “Is that all? That’s hardly proof for me to open a case.”

“I...” Tracey hesitated. Dare she mention the note? It was evidence, but it was also potentially illegal. She sized up the man in front of her. “I...received a note, saying he would be on vacation.”

“Well, that solves it! He’s merely on vacation, thank you Ms. Higg—.”

“He didn’t make arrangements for a vacation today, Mr. Berkley. I’m his secretary.”

“It was typed on combustible paper.”

Mr. Berkley leaned forward, the silence deafening. Tracey shifted nervously in her seat. She knew bringing up the paper could be dangerous, especially when she thought of its questionable history.

“I-it evaporated in my hands,” she said. “Right after I finished reading it.”

His icy stare seemed to penetrate straight through Tracey. She shivered. “Ms. Higgenbottom,” he frigidly said. “You do realize what you are saying?”

“It is impossible to get combustible paper. The High Constable destroyed any remaining sheets of it years ago. And now you claim that you had one in your possession?”

Mr. Berkley squinted, sighed, then took up the paper from the typewriter. He then rolled it up and put it into the tube behind him, pulling the lever and sending it off. “I’m going to pretend I did not hear you say anything about the paper. I’ve just filed a break-in report; constables will be out at Porter Keeper Shop. Ms. Higgenbottom,” he said, his gaze fixed on her, “I would be very careful to whom you mention this paper to. You may land yourself in prison.”

Tracey gulped. “Yes sir.” She stood up. “Thank you, your help is much obliged.”

But Mr. Berkley was already back to typing on the typewriter. Without another word, Tracey Higgenbottom left the office. As she descended the stairs of the High Constable office, she felt even more helpless than she had that morning.