Tracey paced about the shop as the constables took a few images with their strange machinery. She watched as they aimed the small device at each heap of disorder, and with the crank of a handle, sent steam everywhere. “Photographs,” they had explained to her earlier. “Much like having a painter on-scene, but faster.”

She had spent a better part of her noontime turning away customers and answering questions from the constables. I’m beginning to wonder if this robbery report will be of any use! Tracey thought. Outloud, she sighed. “Almost done, ma’am,” a constable said, a little startled at her injection of impatience. “Apologies for the delay. We’ll wrap up the photographs and be right out in a jiffy.”

“Alright, thank you,” Tracey said. She glanced at the clock. 12:40 PM and still no sign of Mr. Porter. She had stopped by his home (to which she had the key) and found no one inside, and then had called him on the steamphone and got no response. She tapped a finger on her forearm. It’s been almost 6 hours and nothing. Not even a single lead.

“Is this yours, ma’am?” a constable asked, handing her a handkerchief. Tracey jumped.

“No worries,” he pleasantly said, tipping his hat.

Tracey took the handkerchief from his extended hand. She squinted. I don’t recognize this handkerchief at all! On the corner were the initials RN. “Ehm no—,” she stopped herself. This could be the evidence I’ve been looking for, my first lead! She looked up to the inquisitive constable. “Now that I think of it,” she began slowly, “I believe this could be my friends’. She may have dropped it when she visited.”

Tracey swallowed. The only friend she had was far away on the other side of the country; they hadn’t visited her in years. The constable hesitated as if he saw through her bluff. After what seemed like hours, however, he finally nodded. “Very well, ma’am,” he said. The other constable handed a sheet of paper to him, then left the shop. “Alright, ma’am, here’s your report,” he said, handing the sheet to Tracey. She glanced it over, noticing that there was only vague information, hardly enough to open a case. Tracey frowned as she looked closer at the details.

“Something wrong, ma’am?” he asked, leaning forward in concern.

“A typo on the shop’s name. It’s Porter Keeper Shoppe, with ‘ppe’ ending shop. You have on here ‘shop’, with only ‘p’ ending it.”

The constable looked at the sheet. “Will you look at that. Suppose there was a typo somewhere. I’ll get that fixed when we get back.” He scribbled a note in a pad supplied from his pocket. “Thank you for your alerting us, and as for this case, we’ll be in contact with you if we find any leads.”

The constable paused, then cleared his throat. “You see, ma’am, there’s quite a bit a’ robberies in Mondon, and oftentimes we can’t find the culprit...”

“I see.” Tracey looked at the paper. It felt as if everything were a dead end. Rustling herself, she quickly shook the constable’s hand. “Thank you, sir.”

“Any time,” he said with a pleasant smile. With the tip of a hat, he turned and left.

Tracey’s shoulders sagged, her fake demeanor slipping away. “Well, Tracey,” she muttered, “You’ve got two pieces of evidence now: a handkerchief, and spectacles... And a city full of people who both have a motive to take Mr. Porter and could have the initials RN.”

Frustration built up in her.

"What am I supposed to do with these?” she yelled to the ceiling, flinging the paper down. “This is hopeless. I can’t find Mr. Porter at this rate.”

Behind her, the door’s bell jingled.

“I’m sorry, we’re closed at the moment,” she said, not bothering to turn around. “Excuse the disorder.”

Tracey straightened, then turned around. There stood a woman not any more than twenty-five, of average height. Her coca brown, tightly coiled hair was styled into a fashionable bun, and her dark skin complimented the deep violet of her ensemble. The dress’ bodice and jacket looked as if it had seen its share of traveling. Her skirt, or absence of it rather, surprised Tracey. In the place of a skirt were a pair of bloomers, cuffed with a smart pair of brown boots. 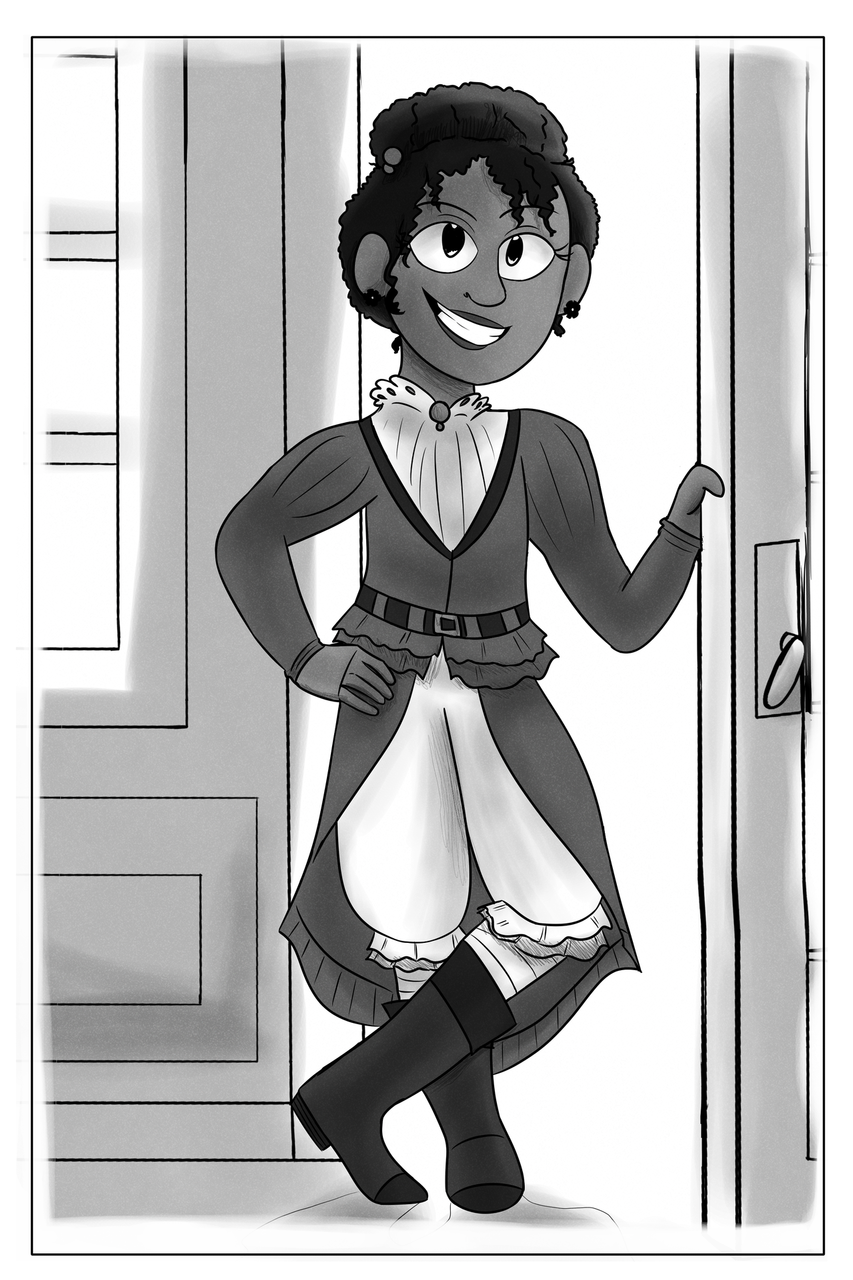 “Bloomers!” was all poor Tracey could say.

“I prefer ‘knickerbockers’ miss,” the woman said comfortably. “These always cause quite a start, but, ya know, when you travel by steamship alone, it’s pretty impractical to wear skirts around machinery. Believe me,” she chuckled, “I’ve learned the hard way.”

“Tracey Higgenbottom, but Tracey will suffice,” she replied. “Pleased to meet you as well.”

“Alright, Tracey,” Mittie said with a smile. “Now, I do see the ‘disorder’, as you said. And I also saw you had a couple a’ constables around?”

“Yes, were you watching?”

“A little.” She shrugged. “I just returned to see if anyone would come by. Supposed someone found the mess and called in the constables.”

“‘Returned’? Were you involved in the break-in here?” Tracey’s interest was piqued. Could this possibly be a witness?

“Not quite. Actually, I had just arrived in Mondon last night and had passed by this shop. I had seen a couple a’ people inside sometime ‘round midnight. Looked a little suspicious, but I didn’t think much a’ it. Until I passed again this afternoon and saw you here with those two constables.”

“Why didn’t you report it yourself, when you saw people here last night?”

“Like I said, didn’t think much of it,” she said with a shrug. “Besides, I didn’t stick around. I didn’t have any a’ my self-defense mechs with me, and I’d rather not stick around to find out if I would need it or not.”

“Did you...” Tracey hesitated, “How many people did you see?”

“Was one of them burly? With spectacles?” Tracey’s heart pounded in her chest.

“Spectacles, no. Burly, yes. And...a burgundy vest and a small bit a’ brown hair on top a’ his head.” With the latter part of her statement, she reached her hand above her own head and made a scratching motion, likely to signify the person’s hair.

“Yes,” Tracey said, nodding enthusiastically. She could now place when he was last there: around midnight. “And the other person,” Tracey ventured. “Could you see their face?”

Mittie paused. She looked up to the ceiling. “No.”

Tracey released a breath. This wasn’t ideal, but at least she now had an eyewitness.

“But they were tall,” Mittie helpfully added. “And slim. ’Fraid I didn’t see that person’s clothes though.”

“Thank you, thank you so much,” Tracey breathed. And now a suspect!

“Is...is something wrong?” Mittie asked. “I thought they could’a been robbers?”

“Oh! A kidnapping then! Or as I like to say,” she added with a small smile, “A curious case ’a plagium.”

“Plagium! One a’ those big words I had read in a book once. Means kidnapping,” she said a hint of pride in her voice. “Always was hopin’ I’d get a chance to use it since I’d read it.”

“Ey, cheer up!” Mittie said, trying to give a reassuring smile. “I can help you out. Seemed like the constables weren’t much help, were they?”

“Alright. Well, I know where we can start looking for your Mr. Porter.”

“Yep.” Mittie nodded. “I heard the two ’a them leave behind me as I continued down the street. Checked behind my shoulder to make sure they weren’t following me—for safety, you see—and saw that they were going in the opposite direction.”

“Oh...depending on the direction, that could only lead to one place...”

“Over this way?” Mittie said, pointing out the shop’s front windows towards an alarmingly dark sector of the street.

“Oh...I was hoping it wouldn’t be there.” Tracey deflated. “But of course, why not.”