Tracey and Mittie Explore the Undertown

The Undertown was not a place where any person, alone or accompanied, would want to find themselves in. From the unkempt and damp sidewalks to the impossibly thick night and gloom that hovered over the whole sector, The Undertown was apt to leave even the bravest of persons unsettled after a short trip about it. Rampant with an abundance of criminals and suspicious characters, the High Constable soon gave up in ever calming down the growing devious deeds occurring there, focusing instead on the equally devious, yet more infrequent crimes in other sectors of Mondon. As a result of this, the notorious sector of The Undertown created its own group of Vigilantes—residents who kept up their own patrols—and when nabbing a criminal, would promptly carry them to the High Constables themselves, and much to the delight and mutually agreed-upon payment from the High Constable would use the funds to hire more residents to join their group.

Porter Keeper Shoppe’s close proximity to The Undertown was no mistake on the part of Mr. Porter. In a place like The Undertown, there would almost certainly be people who would need their secrets kept. And by being the first Keeper Shoppe that a person would see after escaping the sector, Mr. Porter was almost guaranteed to receive eager customers. Just a few paces away from The Undertown, it was no hard task for anyone from there to reach. Tracey and Mittie found this to be the case, as it seemed as if it were all too soon before they found themselves amid The Undertown’s gloom.

Tracey and Mittie haltingly walked into the sector, each taking a cautious look about her with each step she took.

“In all a’ my traveling, never have I seen sucha gloomy place,” Mittie said.

“Travelling, you say,” Tracey said thoughtfully. “You’ve mentioned that a few times earlier. What sort of places have you been to?”

“Oh!” she said. Tracey and Mittie turned a corner. “I’ve never traveled much myself. I suppose that I’m just comfortable where I am,” she said with a sad smile. Mittie watched Tracey’s face and raised an eyebrow.

“I see,” Mittie responded. She paused, as if she were about to say something, but then stopped again. “Well,” she started again, “For someone who doesn’t travel, just look at you now! This here area is so dark and twisted, I’ve no clue of how you’re just leading us ‘round these streets without us goin’ in circles.” 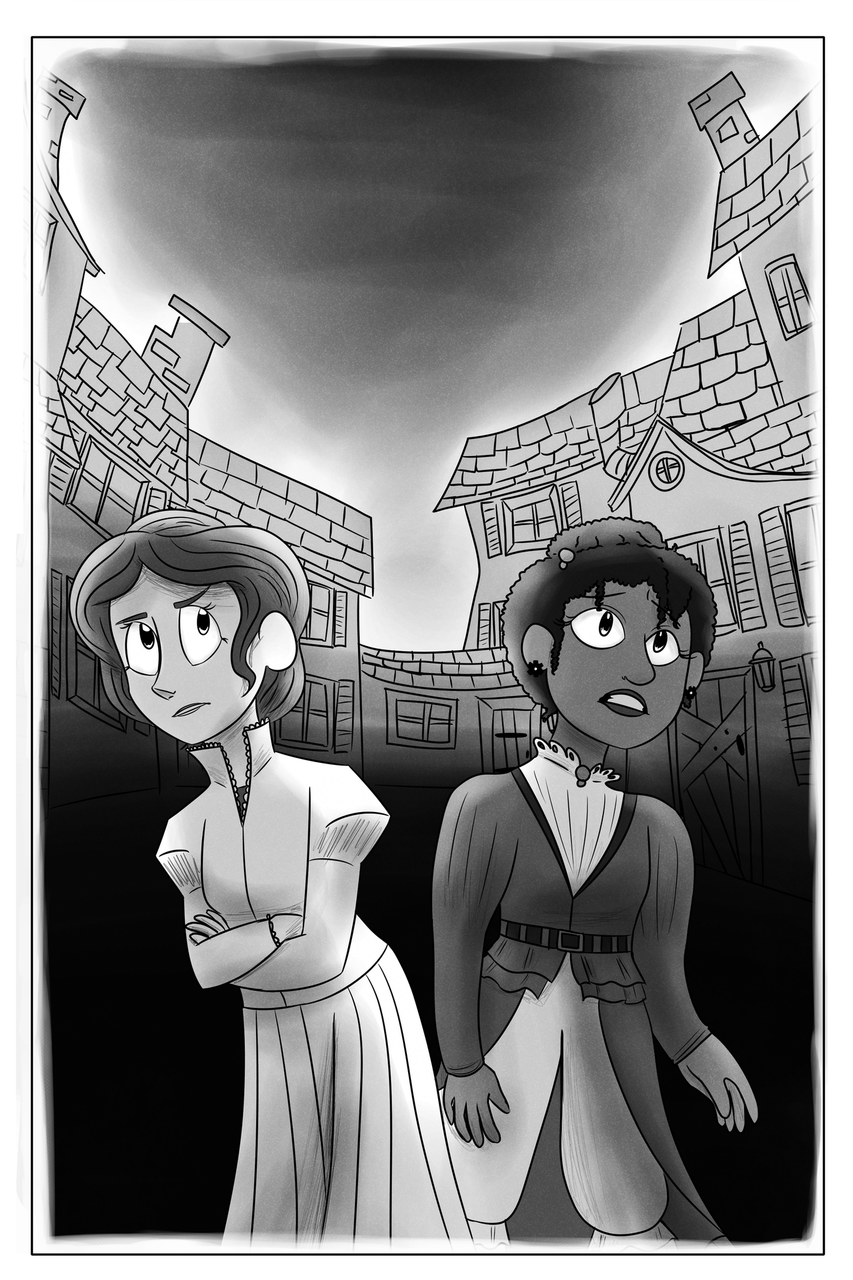 “O-oh. Yes,” Tracey said looking away. “I suppose I’ve had a bit of...experience in The Undertown.”

The two continued to walk in silence as Tracey lead them through the ever-narrowing streets.

“So!” Tracey said, breaking the uncomfortable silence. “We’re on the lookout for a tall, slim person. Which means just about half of the sector’s population. Any suggestions?”

“I dunno,” Mittie said with a shrug. “Perhaps where you can find lots a’ people? A shop, maybe?”

“I figured the center of The Undertown would be where all the shops are,” Tracey said, her eyes squinting. “Here we go! Some shops!” She observed the signs.

Shrimp Renegald—Finest “seafood” away from the sea!

“I could do for some shrimp, actually,” Mittie said as Tracey read the signs aloud.

“Trust me,” Tracey said, glancing at Mittie, “What they serve there can hardly be called ‘seafood’. I’ve tried it before.” She shuddered. “I wouldn’t recommend them. ”

“Oh...Ya’ve tried them before?” Mittie said.

“I...yes. I have.” Tracey abruptly said. Mittie started, as if she were taken aback, but said nothing. She instead scanned her surroundings.

“How about that store down there?” Mittie said. “Seems to be many people over there. And look! A tall n’ slim person!”

Tracey’s eyes followed to where Mittie was pointing. Down the street there appeared to be a gathering crowd around what looked like a disturbance.

In the center of the crowd was a tall man with a bushy mustache. He wore a shiny dome of a hat on his head, something that reminded Tracey of a cooking bowl. On his chest was an equally shiny circle, its words too small for her to make out. Her blood ran cold. “That looks like one of those Undertown Vigilantes.”

“Yes, they’re The Undertown’s version of constables,” Tracey quickly explained. “I think we should move on from here—,” Tracey said.

“Fascinatin’! Let’s get closer, I need ta see if he’s the same person from ya shop last night. What’s he lookin’ at?” Mittie urged, pulling Tracey along with her.

“Wait—!” Tracey began to protest. But it was too late. Tracey quickly found herself near the front of the crowd with a good view of what was occurring.

In the center of the crowd was the Vigilante. She lowered her gaze to see what he clutched in his hand. There, caught by his scruff, was a young boy, not any more than 12, clutching onto a loaf of bread, his arms clad in mere rags of clothes. Tracey could hardly see his face under his matted hair and rugged cap. “Again I ask ya, young man: can ya let the bread go?”

The boy ignored him still, looking resolutely to the ground.

“This has been going on for ten minutes, poor boy,” a nearby person said.

“Poor man!” someone else replied.

“I don’t know,” yet another person piped. “I think they both should just give it a rest.”

Mittie squinted at the Vigilante, slightly tilting her head, as if in thought. She finally sighed. “Tracey, can we do somethin’ to help the poor lad?”

Tracey quickly shook her head. “With a Vigilante? Oh no. Say the wrong thing and you could end up in the High Constable’s office.” She quickly averted her gaze and tried to squelch the growing disquiet in her. Don’t bother, Tracey. She told herself. After all, he did steal something. Somehow, however, she couldn’t convince herself with that conclusion.

“Oh, alright,” Mittie said, disappointed. “I really just came to see if that might’ve been the person I saw last night. It isn’t.” Mittie started to leave. “You were right, we should’a moved on.”

“Wait,” Tracey said, with a resolute edge to her voice. Mittie paused and looked at her.

Tracey steeled herself, bunching up her shoulders and taking a deep breath. “It isn’t right. I cannot stand to the side and watch this happen, Mittie.”

Tracey smiled. “I haven’t done this in years, but...watch me,” she haltingly said.