Tracey could hardly believe herself as she pushed her way out to the center of the crowd, confronting the Vigilante. He seemed much larger in person. Tracey felt very small in comparison. “S-sir,” she started. The Vigilante ignored her, still lecturing the boy. “Sir,” she said louder.

“What’s that miss?” he gruffly asked, looking up to Tracey. She swallowed back a shudder.

“That young man there is my brother.”

The Vigilante paused, slowly looking between her and the boy. “Ye certain?”

“Yes.” Tracey could hardly stand ground under his piercing stare. Perhaps this was not a good idea... She nervously thought. Around her, the crowd began to murmur. “I-I can pay for the stolen bread and any damages he may have done. I apologize for his mischief. You know how children can get!” she ended with a nervous chuckle.

Now both the boy and the Vigilante stared at her. Her cheeks flushed.

“C-come, dear. Come to Tracey,” she said, holding out a hand. The boy looked at her extended hand, then up to the Vigilante. The Vigilante looked once more between the two, shook his head, that let go of the boy. In a flurry, the boy rushed next to Tracey.

“Sorry, ma’am,” the Vigilante said. “Don’t worry ‘bout the money, I’m just tryna’ catch a group a’ littl’ thieves in the area. Thought he mighta been their ringleada’.”

“Oh dear, I do apologize for any trouble he may have caused,” Tracey said graciously. She looked down at the boy. “Come along now, let’s go.”

He nodded and took her hand, avoiding her gaze. All the while, he still held onto the loaf of bread.

“Alright, alright what’re ye all goggling about for?” the Vigilante said to the crowd, waving them off. “Go on now! Nothing goin’ on here! Out, out!” He continued dissipating the crowd as he walked away. Tracey watched as the crowd left and the Vigilante disappeared from sight.

“Are you alright?” Tracey asked the boy. He nodded, barely meeting her gaze.

“That was amazing!” Mittie said, bounding up to the two. “I always sized ya up for a timid type. Gonna have ta keep my eyes peeled around ya, ha! And ya said ya’ve done this before huh?”

“I don’t like seeing children in trouble, that’s all,” Tracey said. “What’s your name, young man?”

The boy looked up at her. This was the first time Tracey saw his face so close. Patches of coal were smeared on his face in various spots, from his cheeks to his forehead. Out from the ashes stared back a pair of bright, inquisitive eyes, so large, they made his nose look curiously small. His small mouth was pursed as if he were unsure if he should trust her. 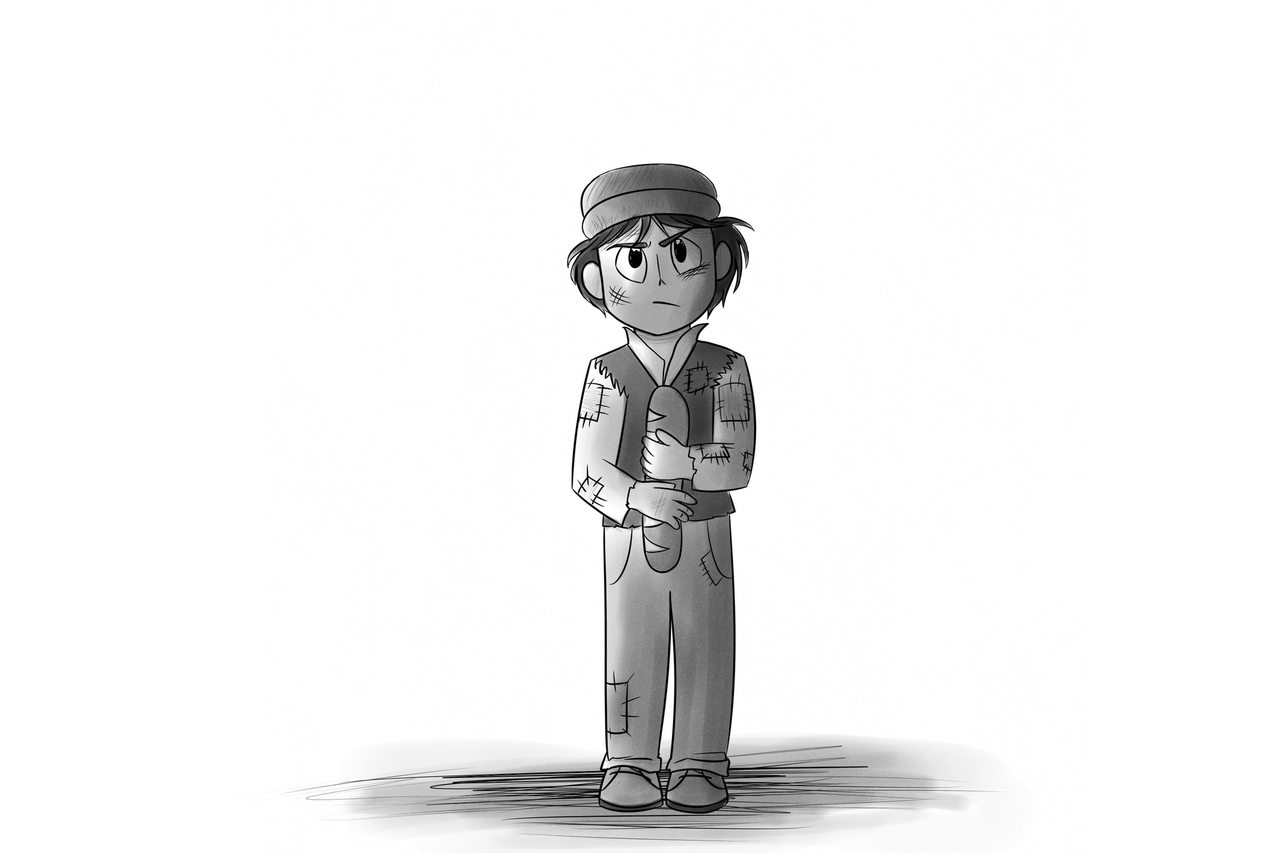 “It’s alright, you can count us as friends,” Tracey gently said, patting his shoulder. Her gloved hands returned coal on them, of which she discretely wiped into a handkerchief she had on hand. His clothes were just as full of coal as his face. Over his tattered shirt, he wore a worn vest, his baggy pants sported some patches, and his feet wore a smart pair of shoes. He shuffled.

“Name’s Charlie, miss,” he quietly muttered. “And I ain’t no crim’nal. I just was gettin’ bread for me and Harrie, miss, promise!”

“Dear, I never called you a criminal!”

“That’s a lot a coal ya have there,” Mittie piped. “You must’ve seen your fair share of chimneys, I thinks!”

The boy’s eyes widen. “How’d ya know?” he exclaimed.

“The coal, for starters.” Mittie winked.

Charlie’s face slowly broke into a smile. He looked between the two of them. “Says,” he started, “What brought the likes of you two here? I’ve hardly seen anyone quite as ’spectable as you. Well,” he said pausing and looking at Mittie’s knickerbockers. “Almost ’spectable, I guess.”

“You travel?” he said, his eyes brightening. “Aw, gears! I’ve always wanted to travel the world. Likes a real gentl’man does!”

Tracey smiled. “We’re here on the search for a missing person, Charlie. My name is Tracey.”

“Mittie here said she saw this person disappear somewhere into The Undertown.”

Charlie frowned. “Gears! Ya know it’s really hard ta find anyone in Unda’town... What did the fellow look like?”

“A man,” Tracey said, “Who’s fairly large and wide, with a mustache and slightly balding. He was wearing a burgundy vest when I saw him last.”

“The other person,” Mittie added, “Was tall and skinny. A man, I believe. Can’t give much more than that, sorry!”

“I think I can work with this...” Charlie said, thoughtfully looking around. “I know just who you can ask. Follow me!” With those words, Charlie spun around and, bread in hand, ran off down the crooked streets of The Undertown. Tracey and Mittie could barely give each other exasperated looks before they ran deeper into The Undertown, following the young boy.

Tracey and Mittie stood by the entryway, awkwardly scanning the room about them. The floors were bare, worn wood save for a burlap bag that looked as if it were serving as a makeshift rug. A door next to the window was left ajar, and a glimpse of a narrow staircase could be seen within. Charlie had disappeared somewhere up there after letting Tracey and Mittie in.

A shaky wooden table sat in the center of the room, adorned with nothing but a stub of a candlestick, a small broken jar with some dried flowers inside, and the loaf which Charlie had carried with him sitting proudly on a chipped plate. The only seat in the room was already occupied by what looked like a girl of no more than thirteen.

Her hair was pulled up into a tight bun, a few black sprigs escaping from it. Her dress was just short of her ankles and full of patchwork. A small apron covered over a majority of the dress’ imperfections, which included its being as full of coal as Charlie’s clothes. Her shoes were tattered boots, seemingly held together with nothing but the lace which closed them. Tracey noticed that her hands were shaking.

“How do you do?” the girl asked stiffly. “My name is Harriet.”