Tracey looked at the tense girl as she fidgeted with her hands. She tried to muster a smile.

“Tracey Higgenbottom,” she said with a friendly tip of the head.

“Mittie—just Mittie will do,” Mittie said with a smile.

“Charmed,” Harriet replied. She shifted in the seat, her forced smile wavering a bit. “I-I’m sorry,” she stammered. “I suppose I’m not too good of a hostess, there being no seating for you.” She quickly stood. “You can have my seat!”

“That’s quite alright,” Tracey reassured her. “I don’t mind standing.” 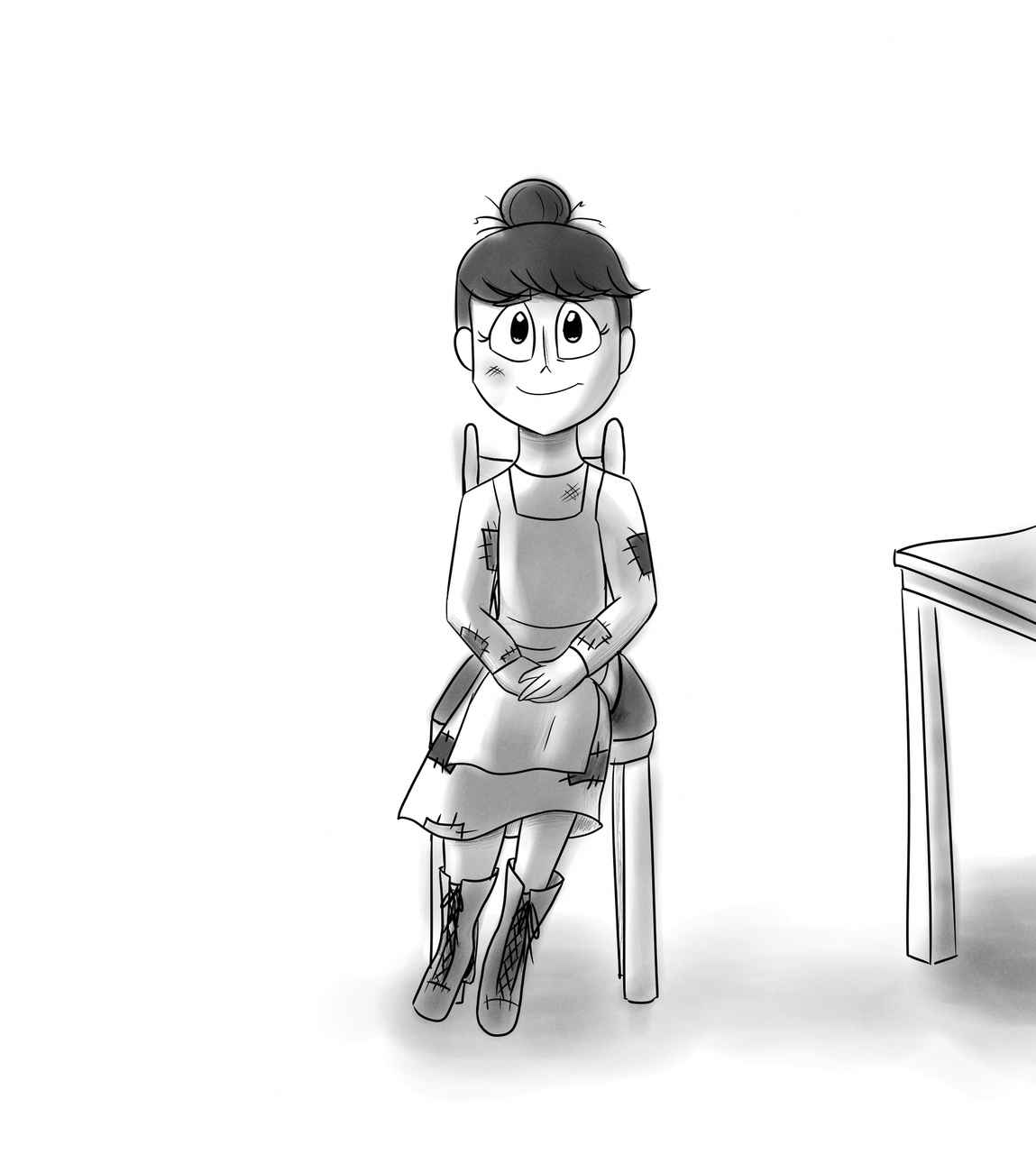 “I’m just a traveler,” Mittie said. “This is a nice home you have here!”

“Just Mittie will do.”

“Of course. Thank you, Mittie.” She closed her eyes and nodded. “So,” Harriet began, more confident than she was before, “Charlie said that you both are lookin’ for some men?”

“Fat man with a mustache with a skinny tall man.”

“Funny pair, if you ask me!” Harriet said, pacing the room. “I’m guessing the kidnappee is the skinny man?”

Behind her, Mittie stifled a snicker.

“Charlie was right to carry ya to me,” Harriet said thoughtfully. “Ya see, ‘im and I are both a couple a’ chimney sweeps, and since I’m older, I’m in charge of scouting out new customers. I meet lots a faces in this kinda work.”

“When did your Mr. Whatzit go missing, Miss Higgn’bottom?”

“Thanks, Tracey!” Harriet said with a toothy smile. Her confidence seemed to bloom by the second. “I might have just what you’re looking for.”

“You do?” Tracey looked to Mittie, who raised her eyebrows in intrigue.

“Yep! Last night, I was walking through one a those nice neighborhoods, ya know, not in The Uppertown, but nearby. I was just headin’ back from one a our chimney jobs, Charlie had already gone home and I had stayed behind to discuss payment. Gears, you shoulda seen how much coal was in their chimn’y! I’m surprised the house didn’t go up in flames years ago! Anyways, I was headin’ back home when all a sudden a couple a people came barreling past me—reeked of alcohol too. Nearly shoved me off the sidewalk, those two. I never saw their faces, but one was large n’ round, and the other one tall. I wouldn’t say the tall one was skinny, though...”

“That’s rather vague. They may have just been some men heading back from a gear pub,” Tracey said with a frown. “Could you see what they were wearing?”

“No,” Harriet said, shaking her head. “The gaslighter hadn’t reached that section of the street yet. I saw which house they went into, though. That’s what struck me as funny, you see?”

“Mrs. Pinot’s home. She’s one of our reg’lars. Kinda grumpy if ya ask me. What’s so funny is that she’s just a lonely widow, I didn’t think she knew anyone!”

“Hm...I don’t think she’d know Mr. Porter,” Tracey said. “I don’t remember ever filing a client by her name.” She touched the handkerchief in her pocket. And that name doesn’t match with RN either, she thought.

“Maybe we can look it out to see if we find anything, Trace?” Mittie said with a shrug. “Never know if we’d find some other lead there. This is the most we’ve got so far.”

Tracey flinched. Trace? she thought in alarm. “Since when has my name been Trace?” she asked, squinting at Mittie. Mittie shrugged.

Tracey sighed. “Can we go see this Mrs. Pinot, Harriet?”

“Sure! You know,” Harriet said enthusiastically, “This could be a chance for me to get her to have her chimneys cleaned again. Mrs. Pinot pays ‘handsomely’, as she always says.”

“How far is she?” Mittie asked, wearily looking at the front door.

“Gears!” Charlie’s voice distantly said. Somewhere above Tracey and Mittie, Charlie ran around. They could feel the shake of his steps, see dust shake off from the ceiling, and hear his fast pattering down the stairs before he finally burst into the small room, his vest now gone and in its place a jacket and scarf. “Ready, Harrie!” he said with a grin, chimney brush in hand. The small group now filed out of the door. Tracey’s eye, however, caught something glittering under the burlap bag. Without thinking, she bent and snatched it up. 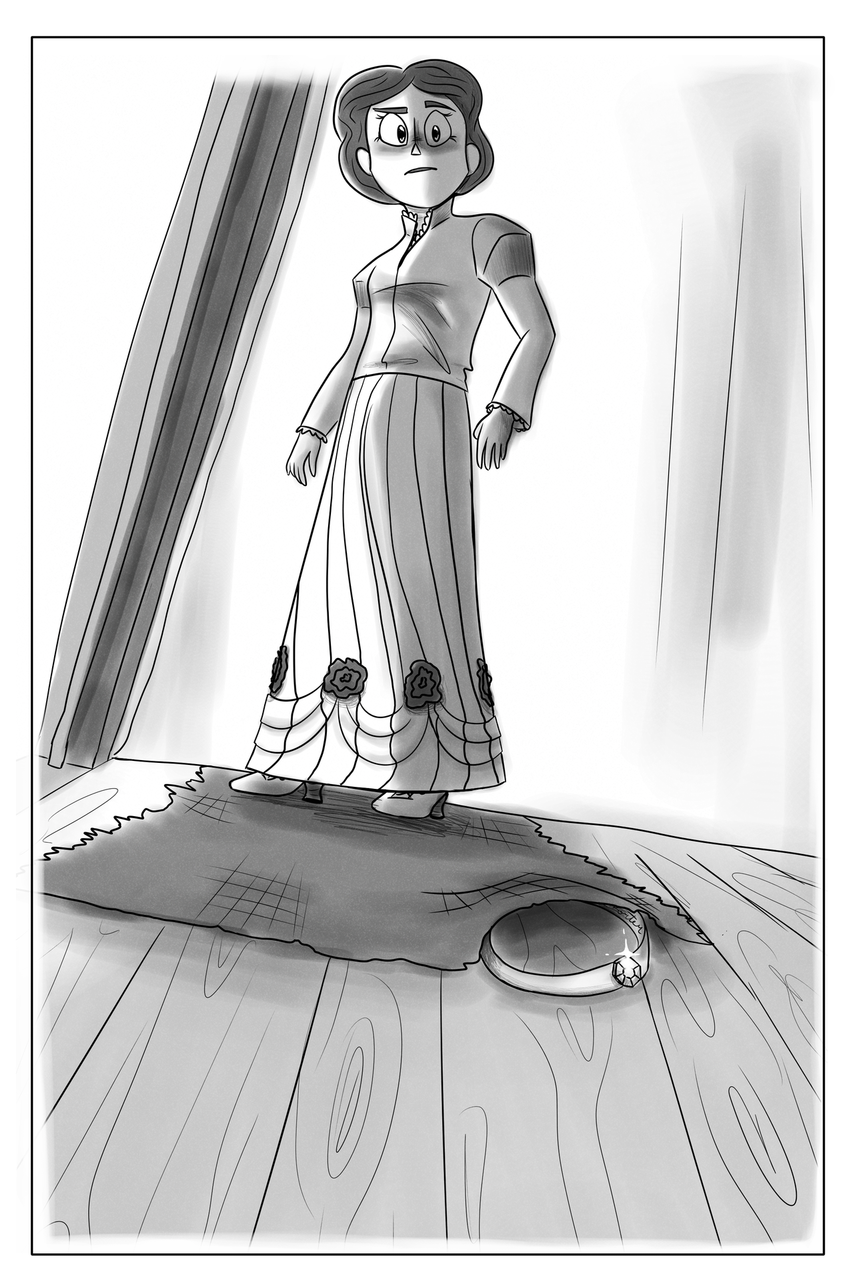 Closer examination of the object caused her to start. Mr. Porter’s ring? she thought in alarm. She checked the engraving inside.

Yes, it was indeed his ring. She hesitated. Just how did these two get their hands on his ring? “Trace? Comin’ aren’t ya?” Mittie said poking her head back inside.

“O-oh, yes, of course!” Tracey said, instinctually cramming the ring inside of her pocket. “I...I just thought I dropped something.”

Mittie glanced at her hand stuffed in her pocket before looking back to her. “Alright, don’t get left behind,” she said, ducking back outside. “Don’t want ya to get lost in this area!”

Tracey’s heart pounded as she followed suit. I’ll ask them later, she told herself. There’s no need to distract from where we’re going now.