“Mrs. Pinot??” Charlie asked in dismay, stopping short of the house’s walkway of which Harriet had led them to. “If I knew we was comin’ here, I woulda stayed home!”

“That’s exactly why I didn’t say anythin’,” Harriet sniffed. “Besides, Mittie and Trace asked nicely. Mrs. Pinot doesn’t let just anyone into her house. We’re just making it easier for you two,” she explained as Charlie huffed. “The plan is that you, Trace, is our visiting cousin, and Mittie’s a friend who decided to join you, ok?”

“Right,” Tracey and Mittie said together with a serious nod.

“Alright,” Harriet said. “Here goes nothin’.” She closed her eyes, nodded, and then quickly turned the door gear’s handle. The little handle next to the door started a chain of gears and created a clacking noise, soon producing little puffs of steam and ending in a tinny ‘ding’.

“Most people ‘round have these kidna’ bells,” Charlie explained.

Then, the door unlocked with an alarming amount of aggression and swung open. There stood a woman of tall stature, looking down at the entire group. Her dark hair was pulled tight into a severe bun. Around her throat sat some sort of gear brooch. Her sleeves came out in billowing puffs, cuffing close to her wrists, and her dress dramatically flooded the floor around her. Her sharp eyes, not to be forgotten, darted between Harriet, then Charlie, then Mittie, and finally Tracey. “Harriet,” she said, her voice surprisingly gentle. “Who are these? Why are you here?” 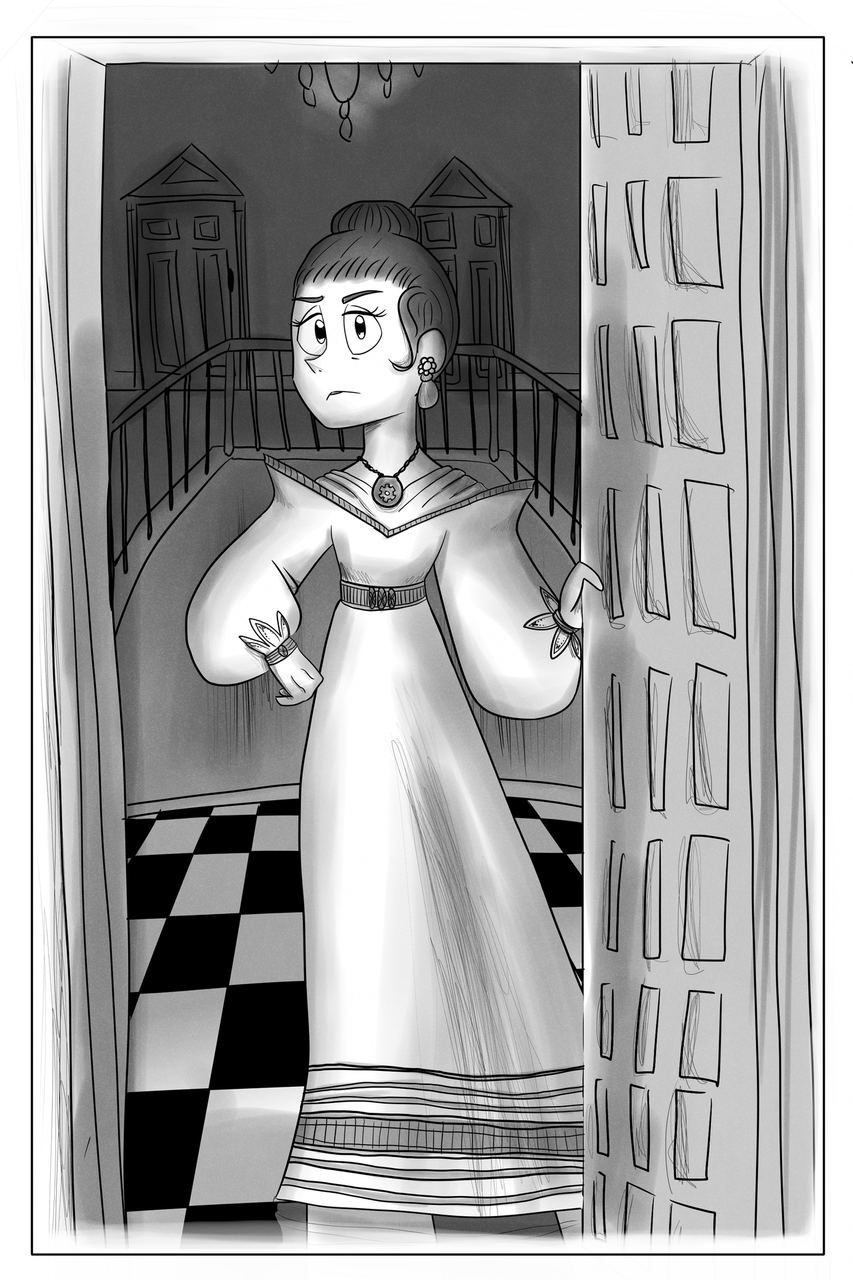 “Mrs. Pinot, ma’am! At your service,” Harriet replied with a tip of her head. “We’re checkin’ round on our customers for follow-ups. Do you mind if Charlie an’ I have a look at your chimney?”

“I’m Harriet’s cousin, visiting from...” Tracey’s mind raced. She hardly knew anywhere outside of Mondon, let alone her own sector and its neighboring ones.

“Strattengear,” Mittie interjected. “Sorry ’bout Tracey, she can get nervous ’round new people. I’m her friend and had wanted to meet her cousins—she speaks ‘bout them so much, y’ know!”

Tracey squinted at Mittie before continuing. “Yes, and Harriet said she’d like for us to meet her best clients. Which included you.”

“Isn’t that sweet,” said Mrs. Pinot rather flatly, before turning her attention back to Harriet. “Why did you not just say so, dear?” she said, noticeably warmer, looking down at the girl. “Come in, all of you. Charlie, you can leave your broom by the door.”

The group gathered into the large foyer, their eyes darting around from the tall ceilings to the grand chandelier, to the iron staircase, and the glistening floors—so shiny, one could see their own reflection in it. “Alright, what are you really here for?” Mrs. Pinot asked, spinning around from closing the door with a dainty hand on her hip. “Harriet, I know you and Charlie have no family other than each other, and...ah...Tracey, is it?”

“Hm, yes, it is Tracey. Ms. Higgenbottom if I’m not mistaken.”

“For a secretary, you’re not very quick at recognizing regular customers.” Mrs. Pinot sniffed. “Perhaps my record name will pique your memory? Corsetta Pinot.” Her attention next flitted to Mittie. “You, however, I haven’t seen before.”

Mittie looked to each member of the stunned group before holding up her hands in defeat. “Suppose the gig is up, eh?” she finally said. “I just came inta town. The name’s Mittie.”

“Hm,” was all Mrs. Pinot sounded. They stood in tense silence. “Harriet,” she finally said, “I do believe an explanation is in order, don’t you think?”

Harriet stared at the ground, her ear tips a flaming red.

“Never mind that,” Mrs. Pinot said. “Come now, all of you. There’s hardly any use in us standing here when I have a parlor ready for guests, now is there?”

“You’re expecting, then?” Tracey asked politely as they all entered the formal.

“Yes,” Mrs. Pinot replied. “Have a seat, feel free to take any snacks,” she said, gesturing to the prim sofas. Everybody sat.

The room had bright wallpaper decoring the space, and tasteful furniture and lamps lived by large windows that reached to the ceilings. A low table sat in front of the group. The table was covered in all sorts of treats—pickled cookies and sugared carrots. Needless to say, no one took a snack. 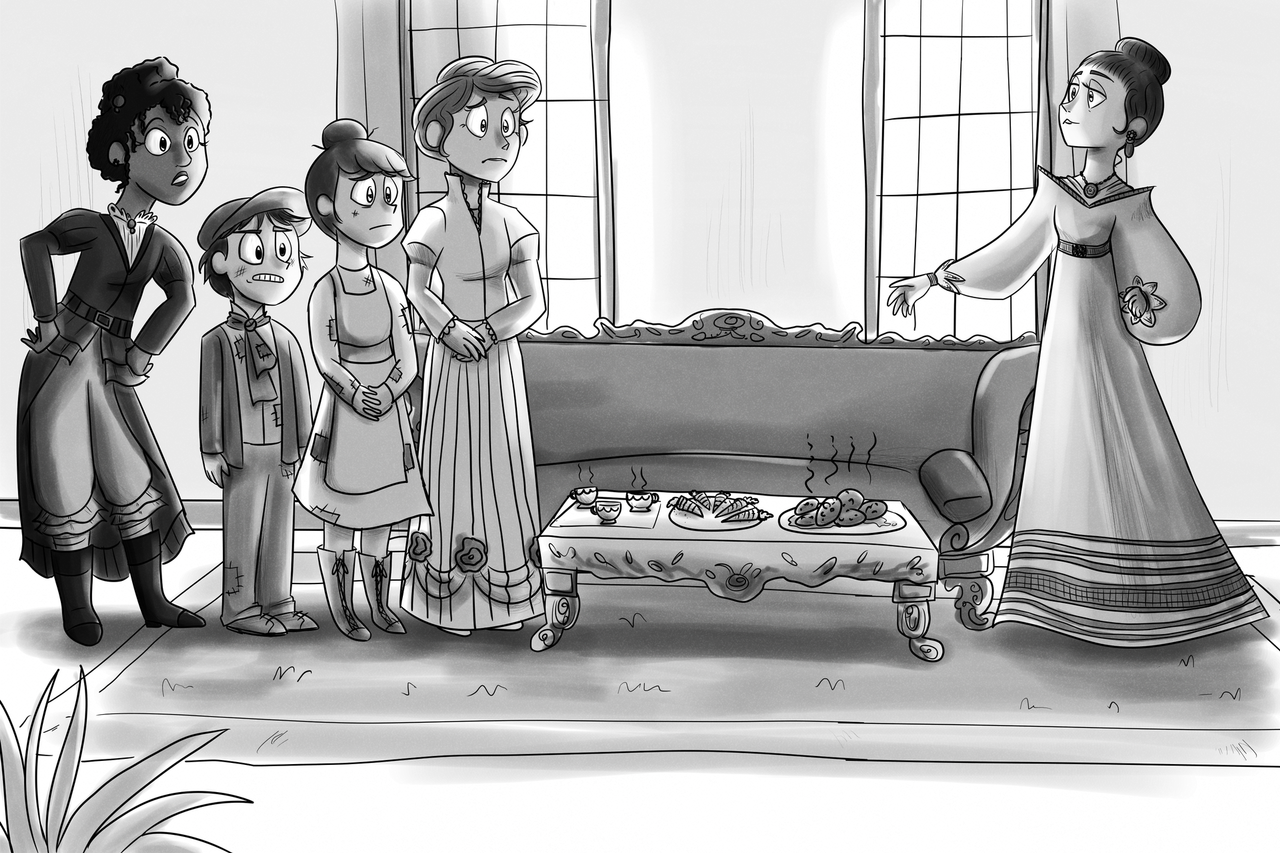 “Did she get all a’ these treats from that nasty Shrimp Renigald shop o’ somethin’?” Charlie whispered to Harriet, who discreetly stepped on his foot in response. “Ouch!” he yelped.

“Is something the matter?” Mrs. Pinot said, looking at the two of them.

Mrs. Pinot raised an eyebrow and then took a seat. Charlie and Harriet promptly sat on one sofa, and Tracey and Mittie took the other sofa. Hesitantly, Tracey reached out and took a cup of tea, the most palatable item on the table. Mrs. Pinot nodded in approval. “Now,” Mrs. Pinot said, her voice slicing through the silence, “Harriet, can you explain to me why you’ve brought Ms. Higgenbottom and Miss...ah...forgive me,” she trailed off, looking helplessly at Mittie.

“Don’t worry, Mittie’s the name,” Mittie said with a friendly tip of her head.

“Yes, thank you. Why have you brought Ms. Higgenbottom and Ms. Mittie here, under the guise that you were here to chimney sweep? I’ve never known you as the type to lie.”

“Apologies ma’am,” Harriet quickly said, looking earnestly to the woman. “We just thought the only way we could get you to talk to Trace would be if she tagged along while we clean!”

“I’m just here ’cause I thought there was a chimney ta clean,” Charlie muttered.

“I’m afraid my chimney is in no need of service, dears. You could have just sent them this way, it would hardly be the polite thing to do to turn away guests!” Mrs. Pinot said with a warm smile to them. Her smile dropped, however, as her attention focused on Tracey. “Do you remember me yet, dear?” she asked, noticeably harsher.

Tracey squinted. From the striking lady’s silhouette, she would have been certain to recognize someone like her. After all, she was the only one in charge of Mr. Porter’s documents! “I...,” Tracey began. Her eyes flitted to Mrs. Pinot’s gear brooch. “I remember...that brooch,” she said in surprise.

“Ah, this?” she replied airly, her fingers brushing the gears. “My late husband had given this as a gift one year. He was an engineer, you know. He used to make the most impressive inventions, very successful.” Mrs. Pinot sighed.

“Sorry for your loss,” Mittie said sympathetically. Tracey looked to her hands, unsure of what to say.

“Oh, it was a long time ago,” Mrs. Pinot quickly replied. “Is that all you remember, Ms. Higgenbottom?”

“Sorry,” Tracey said. “We get a lot of customers at Porter Keeper Shoppe.” She cleared her throat. “But that’s actually why I’m...we’re here today for, Mrs. Pinot.”

“Regrettably there was a burglary of some sort—,”

“Burglary?” Mrs. Pinot asked in alarm, rising from her chair. “Was anything stolen?”

Tracey forced a smile. “I understand that as a customer, you may worry about your documents. But no, I can confirm that no major documents were compromised. It appears whatever they were searching for, they didn’t find.”

“I see,” she said, lowering into the seat again. She shakily took up a pickled cookie, took a bite, frowned at the said cookie, and placed it onto a napkin beside her. “Continue,” she said.

“Well,” Tracey said, “Mr. Porter has not been seen from last night, and I’ve been looking for him since this morning. I thought that you may know something.”

“Hm,” Mrs. Pinot simply said. “But how did you know to come to me? You clearly did not remember me, and I certainly wasn’t the only customer Mr. Porter had.” Mrs. Pinot’s mouth pursed into a thin line, her eyes closing to a squint.

“That’s why Harriet and Charlie are here, miss,” Mittie piped in. “We met Charlie and asked him ’bout Mr. Porter, he led us to Harriet, and she saw Mr. Porter in this area last night!”

“Is that so.” Mrs. Pinot swiveled to Harriet. Harriet seemed to shrivel under her scrutiny. “I’m sure you were mistaken, dear.”

Harriet looked at the ground and said nothing.

“To answer your question, Ms. Higgenbottom, no. I had nothing to do with whatever happened to Mr. Porter. Although it’s unfortunate, I’m sure he’s just away on some unexpected business or something. I heard non-bankers are usually quite busy with those kind of things.”

“I would simply like to know if you saw Mr. Porter on this street last night?” Tracey evenly said.

“Dear, how should I know? I go to bed promptly at 9 o’clock.” Mrs. Pinot said. She stood. “Now, I do believe I’ve taken up enough of your time, I’m sure you’d like to continue your...search elsewhere. Harriet, Charlie?”

“You may come next month to clean. I anticipate I’ll be needing to fire up the chimney again by then.” Mrs. Pinot said as she ushered the now standing group to the door.

“Aw, gears,” Charlie said dejectedly. “And here I thought we were actually gonna clean a chimney.”

“Thank you for visiting, I do hope you find Mr. Porter,” Mrs. Pinot quickly said, as she stepped towards the door. Before the group reached the door, however, it rang with a tinny ‘ding’. “Oh, he’s here so soon!” she muttered impatiently. She swung open the door. “I’m sorry, I was just seeing some guests out, sir. They’ll be out in no time, come in!”

“That is no issue, Mrs. Pinot. The documents will be strictly confidential,” the man replied. Tracey stiffened. I know that voice! she thought, peering closer to the doorway.

“It will be fine if—.” The man abruptly stopped as he stepped inside. He stared. “Ms. Higgenbottom?” he asked in astonishment. Mittie, Harriet, and Charlie stared at Tracey.

“He knows ya?” Charlie loudly asked, to which Harriet discreetly bumped his shoulder, quickly hushing him.