A New Direction is Found

Tense seconds passed in the foyer as Mr. Bentam Berkley stood in the doorway. Tracey froze, Mittie, Charlie, and Harriet stared, and Mrs. Pinot observed all of this unfolding before her. Mr. Berkely stared in disbelief. “I was not aware that you were of acquaintance to Mrs. Pinot,” he finally said. 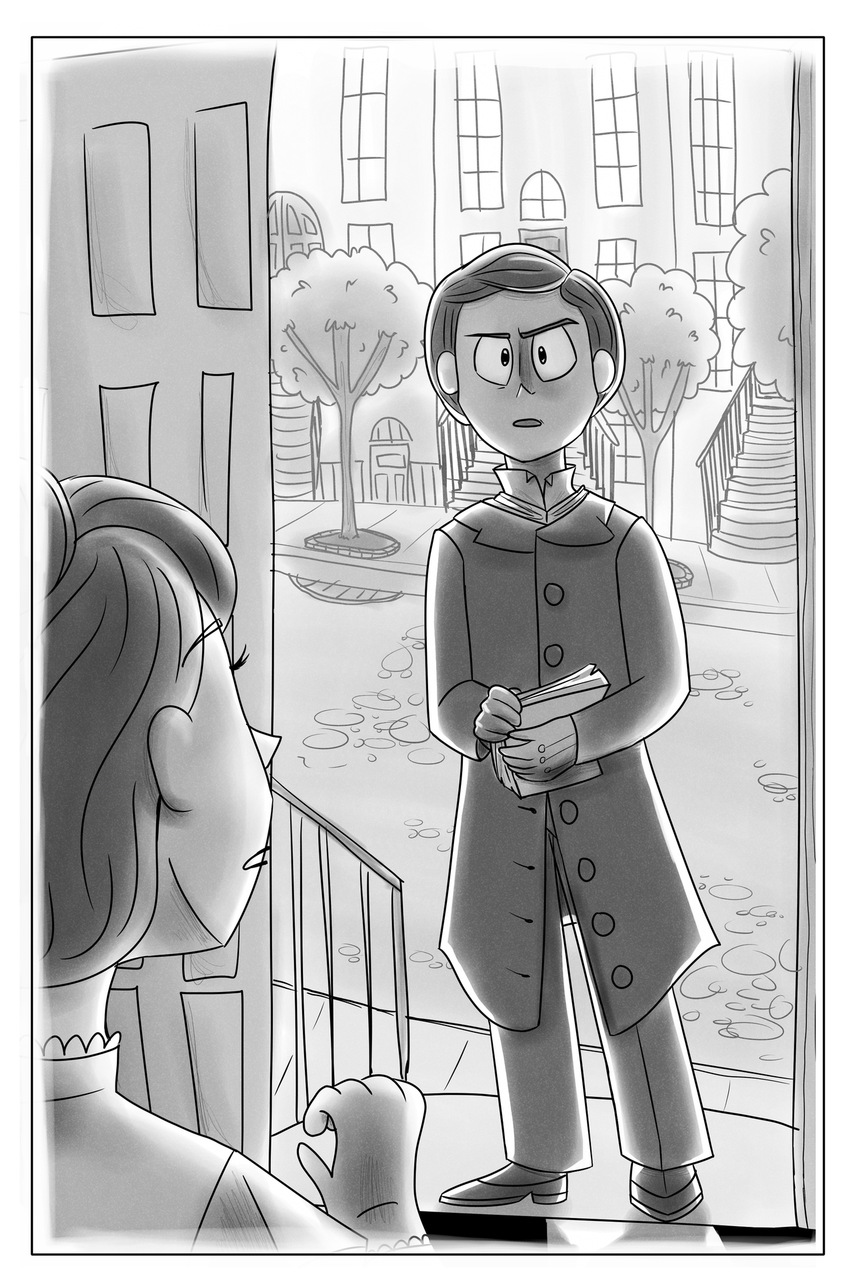 “Ah yes. Mr. Porter,” Mr. Berkely sighed. “I presume that you did check his residence—.”

“Yes and I steamphoned him as well,” Tracey retorted. She could hardly stand the first meeting she and Mr. Berkley had, and this current meeting appeared as if it were going to end even worse than the last one.

“Hm,” he sniffed. “And who are these,” he said, almost in a dismissive tone, his hand barely waving over to the others.

“Witnesses,” Tracey said evenly. “Mittie here had seen Mr. Porter when he was kidnapped from the shop, and Harriet saw him in this area last night.”

“To which I said that she was mistaken,” Mrs. Pinot interjected, fixing her unfriendly gaze on Tracey.

Mr. Berkely looked around at each person. “Witnesses, you say?” He shuffled a stack of papers that Tracey had just noticed he was holding. “Hm.”

More tense seconds passed as he seemed to debate with himself. Tracey sighed. First another dead end, and now this! she thought. At this rate, we’ll never find… She shook herself, stopping the train of thought, and looked up again. Mr. Berkely’s icy gaze was fixed on her.

“Wait outside for me please,” he finally said. “I have some business to attend to here first.” With that, he abruptly turned and walked into the parlor.

“Are we really gonna wait for that rusty man?” Charlie said as they stood by a lampost near to Mrs. Pinot’s residence.

“Do ya know each other, Trace?” Mittie asked. All eyes turned to Tracey. To Tracey, it felt as if every passerby turned to stare at her. She swallowed.

“Yes, and no,” Tracey said. “I’ve only met him this morning. When I was trying to report about Mr. Porter.”

“Port’a?” Charlie piped. “Is that who we’re looking for?”

“Do you know him?” Tracey asked.

“Doubt that,” Charlie sullenly said, kicking at the post. “Most people change their ’pinion once they getta look at us.”

“Oh, no! Mr. Porter would be the last person to look down at someone,” Tracey said. “I should know,” she quickly added.

“You?” Mittie said, raising an eyebrow.

Tracey’s cheeks flushed, and her fingers began to drum on her forearm. “A…anyways,” she abruptly said, “We should discuss what we know so far. I don’t think we have had a chance to thus far.”

“Midnight?” Harriet said with a frown. “Where did ya see ’im?”

“Near The Undertown, I s’pose?” Mittie said with a shrug.

“It was at the shop,” Tracey supplied. “The edge of Burberay, close to The Undertown.”

“Well, what’s the matter with that?” Tracey asked.

“Burberay is at least an hour’s walk away from The Borough—that’s where I think I ’ad seen him, you see.,” Harriet explained. “It’d take especially long if they went through The Undertown to get there. Unless…”

“Unless…they had a steam car?”

Tracey started. Steam cars were a recent marvel to grace the city of Mondon. Bright and fast, they easily outpaced even the fastest of horses. There were a number of problems that plagued this invention, however. Its immense speed was a cause of many accidents, and its clouds of scalding steam that it left in its wake was a hazard to any passerby. Regulations soon followed to keep it out of possession of the general public. “That can’t be,” Tracey said. “Hardly anyone owns a steam car.”

“Not if they’re rich…,” Charlie said, looking out to the carriage-filled streets.

“Say…” Mittie said, her eyes drifting to the apartment that they had just left from, “Would ya think that Mrs. Pinot there would be rich enough to afford something like that?”

“Yes, I agree,” Tracey said thoughtfully. “Mr. Porter’s keeper services were not something that an average person could easily afford.”

“Lemme make a note of that,” Mittie said, snapping out a small pocketbook from her knickerbockers. “Our first suspect, Mrs. Pinot.” She finished writing out details from their earlier conversations and closed the book with a flourish. “Now—,”

“’scuse me,” A gruff voice sounded.

The group turned around.

There stood a gruff-looking woman, donned in a cap, and her hair loosely pulled back into a rather messy ponytail. Her vest and skirt, minus the coaldust, resembled very closely to Charlie and Harriet’s own patch-filled attire. 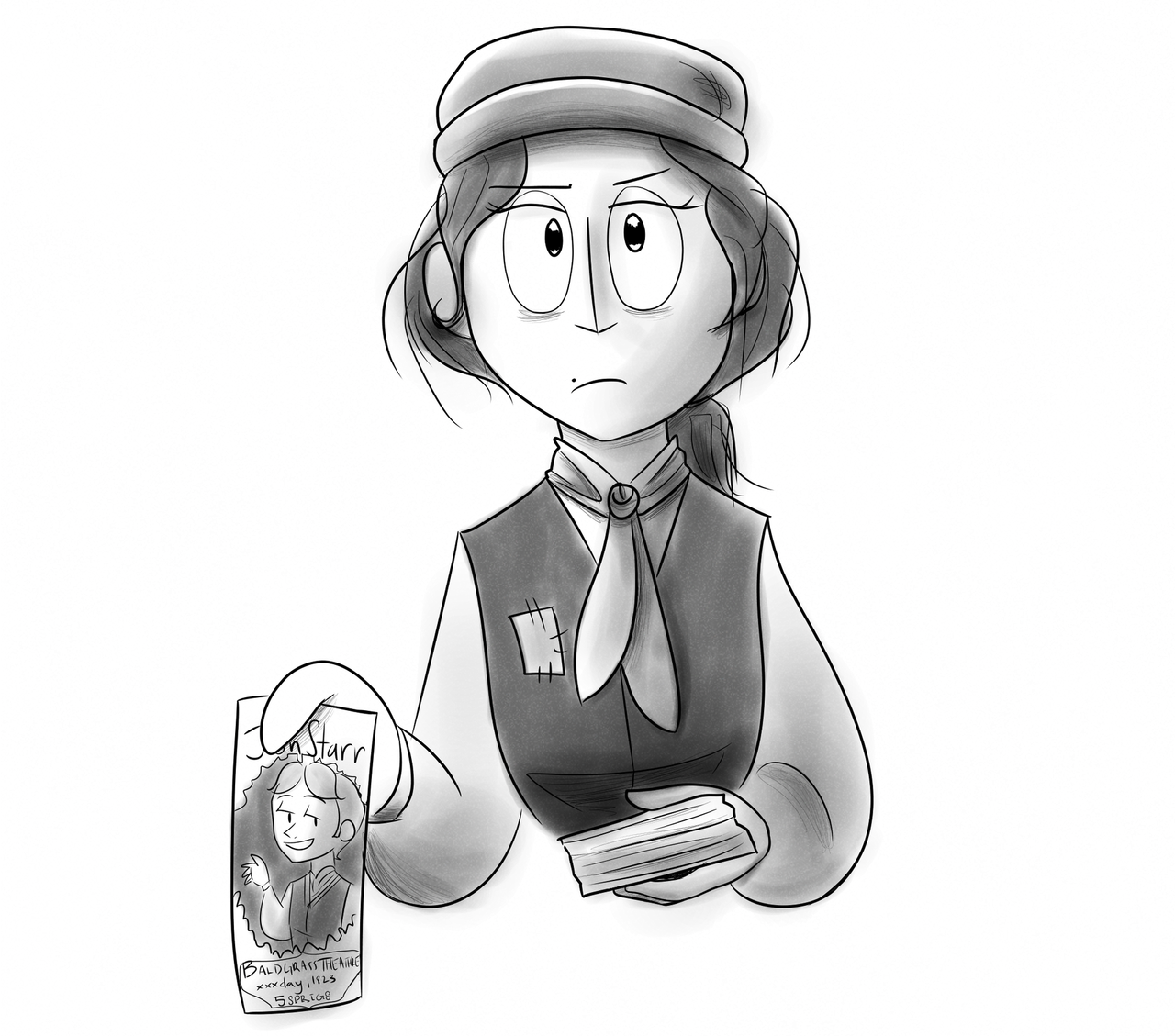 “Can we help you?” Tracey finally asked.

The woman held out a pamphlet. Tracey noticed that the woman held a considerably large stack of them in her other hand. “Come one, come all,” she said flatly, “Jon Starr himself, performing at the Baldgrass Theatre. Tickets only 5 springs. You don’t want to miss it.”

“Oh, I’ve heard practical legends of this man, and I’ve neva’ gotten a chance to see him act, in the flesh! Lemme see this,” Mittie said, as she took the pamphlet. “Oh! In two days. That’s plenty o’ time for me to conjure up some sorta’ outfit to wear. Have you ever heard on Jon Starr, Trace?”

“To think I’ve been walking around all day with someone who’s met Jon Starr! What was he like? How could you just be standin’ there knowin’ you’ve met someone like Jon Starr himself?”

“No, no. I need information! Did he laugh just the same as he does on stage?”

“Or does he really wear his red brooch in his left pocket? Or what about his hair? I’ve heard it’s as golden in person as it is under the stage lights! Oh!” Mittie gasped. “Maybe we can pop into his performance and see if he has any clues leading up to Mr. Porter’s disappearance!”

Tracey nodded, rather disorientated by the tirage of questions from Mittie. “Yes…I suppose we may be able to find out…something. Yes, perhaps we can speak to him after the performance…if that’s even a possibility.”

“I’m a big fan o’ him, Jon Starr,” Harriet piped, an impish grin growing on her face. “Say, do you think I could join you when you go?”

“I don’t see why not!” Mittie happily replied.

Yes, reader, Jon Starr was a figure so well-known in Dnalgne, it’s a wonder that Tracey Higgenbottom did not hear of him. An extravagant actor known to dazzle the stage with his passionate speeches and moving performances, he was often on the front cover of the daily papers of his latest feats—theaters abroad, surprise appearances, and even a private play for the Queen.

“All are welcome,” the woman said, with a nod. With that, she began to walk away in the direction of Mrs. Pinot’s residence. However, the woman suddenly froze and backed up.

“Is something the matter, miss—?” Tracey began to say. The woman turned around and ran.

“What was that about?” Charlie exclaimed.

“Why does it feel like it’s gotten colder?” Harriet said with a small shiver.

“Dunno, I feel that too…,” Mittie replied.

“Hello there,” a familiar, icy voice sounded behind them. They turned to see Mr. Berkley, alarmingly close to them and clenching his stack of papers. “Was that woman bothering you?”

“No…” Tracey slowly said. “She was just inviting us to a performance—,”

“Is somethin’ wrong?” Mittie asked, looking at the pamphlet in her hand.

“May I see that,” he said flatly. Mittie haltingly handed the paper to his extended hand. He then glanced over the said pages, sighed, and handed it back to her. “I would not go to that performance if I were you.”

“Yeah! Why can’t we?” Harriet blurted, before stiffening and biting her lips. “ Sorry,” she whispered.

“You’re quite alright,” Tracey reassured her. “But I do believe an explanation is owed to us, Mr. Berkley.”

“Ms. Halping? Is that who just invited us?”

“Yes. She happens to be a major lead on Jon Starr’s fake performances.”

“Fake performances?” Mittie gasped. “You mean to say this is fake?” She held up the pamphlet.

“There’s only one way to tell,” he replied, seemingly lost in thought.

The ensuing silence lasted for several long seconds. Everyone shuffled.

“What?” he whispered in dismay.

“I may need to go and confirm this performance,” Mr. Berkley finally said.

“Yes, of course,” he replied, striding away.

Tracey looked to the confused group, before following him. “But why did you want for me to wait for you?”

He stopped and turned to them, squinting. “Oh. Yes.” He turned back around, gesturing with his hand. “You may as well come along. I need to catch Mr. Starr before he leaves for rehearsals.”

“He knows Mr. Starr too??” Mittie squealed. Her smile broke into a grin. “Trace, do you mind if we take a little detour?”

“C’mon, Trace! You never know what you can find!” Mittie said as she trotted off.

Before she could respond, Mittie, Charlie, and Harriet already were off, close behind Mr. Berkley. She sighed. At least I can try to find some more clues, she thought.